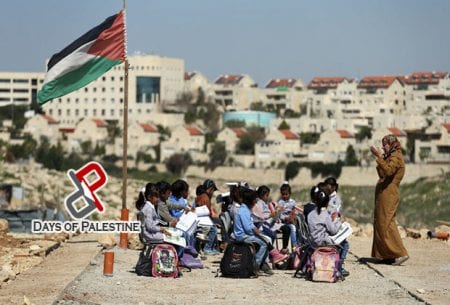 Palestinian children attend class in the street after Israel shuts down school.

The facilities demolished include the only kindergarten for the Jabal Al Baba Bedouin community, which was destroyed in the early hours of 21 August, and a primary school in Jubbet Al Dhib that was demolished on the night of 22 August, according to Days of Palestine.

In a statement, the Relief Web said that Israeli authorities also dismantled and confiscated solar panels—the only source of power—at primary school in Abu Nuwar. The school was also attacked twice last year when parts of it were demolished and equipment confiscated.

Third grade students, there, now take their classes in the local barbershop, as the community has been prevented from building basic education facilities.

NRC Policy Manager Itay Epshtain, who visited Jubbet Al Dhib this morning, said: “It was heart breaking to see children and their teachers turning up for their first day of school under the blazing sun, with no classrooms or anywhere to seek shelter in, while in the immediate vicinity the work to expand illegal settlements goes on uninterrupted.”

The latest spate of school demolitions and confiscations, in the West Bank, forms part of a wider attack on education in Palestine.

Right now, some 55 schools in the West Bank are threatened with demolition and “stop-work” orders by Israeli authorities.

Many of these schools are donor-funded, including by EU member states. Israel denies the majority of Palestinian planning permit requests in Area C, thereby leaving Palestinians with no option but to reconstruct and develop without permits, while Israeli settlements -established in violation of international law – continue to expand.

In the first three months of this year, there were 24 cases of direct attacks against schools, including incidents where tear gas canisters and sound bombs were fired at students on their way to or from school.

Last year, four communities’ educational facilities were demolished or confiscated and 256 education-related violations were documented in the West Bank, affecting over 29,000 students.

“Just when they were due to return to the classroom, Palestinian children are discovering that their schools are being destroyed,” said the Norwegian Refugee Council’s Country Director for Palestine, Hanibal Abiy Worku.

“What threat do these schools pose to the Israeli authorities? What are they planning to achieve by denying thousands of children their fundamental right to education?”

Threats Palestinian children face on a daily basis include violence and harassment from settlers and Israeli soldiers, military activity inside or next to schools, delays crossing checkpoints, and the abduction of children from their classrooms.

Since 2011, the Israeli government has also threatened to withhold permits and funding to schools that are not implementing Israeli curriculum in which references to Palestinian identity and culture, the occupation, Israeli settlements and other aspects of Palestinian history were removed.

“We call on the governments and donors funding Palestinian children’s education to exercise all of their influence to prevent this violation in all its forms,” Abiy Worku said.

“The destruction of educational structures funded by European money is not just a violation of international law. It is also a slap in the face to the international community providing aid to the occupied Palestinian population in a bid to ensure safe places of learning for children.”