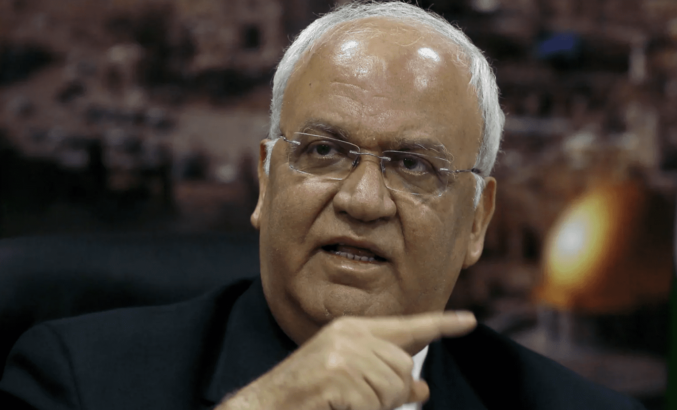 Palestinian leaders will seek help from UN legal authorities – in the form, hopefully of sanctions a la South Africa.

Palestinian leaders plan to ask legal authorities at the United Nations for an opinion on Israel’s violations of the principles of the UN Charter following enactment of the nation-state law, Saeb Erekat, secretary general of the PLO Executive Committee, announced on Monday.

The Palestinian leadership hopes the UN General Assembly will sanction Israel, as it did apartheid South Africa at the time, by placing restrictions on its membership in the world body, Erekat, the top Palestinian negotiator, explained at a press conference in Ramallah. Also present was Knesset Member Yousef Jabareen of the Joint List, who is also chairman of that party’s international relations department.

Erekat and Jabareen announced that, in addition, Palestinian leaders plan to petition the International Court of Justice in the Hague for an opinion on what they called Israel’s racist new legislation. The latter, they charged, contradicts the principles of the 1947 UN Partition Plan, which calls for establishment of two states governed by democratic constitutions that will ensure equal treatment of all citizens by law.

Moreover, the two Palestinian leaders associated the timing of the nation-state law with U.S. President Donald Trump’s “deal of the century” because the latter is also expected to deny the establishment of a Palestinian state within the 1967 borders, as well as Palestinian rights in Jerusalem.

In practice, Erekat said, the nation-state law embraces the principles of the Balfour Declaration, about 100 years ago. He warned that enactment of the new legislation and the denial of the rights of the Palestinian people could lead to the ethnic cleansing of Palestinians – which is what Israel is trying to achieve at present, he added, in the West Bank Bedouin village of Khan al-Ahmar.