You Are Here: Home → Palestinian Teen Reportedly Killed by Israeli Forces Near Bethlehem, Another Dies of Wounds in Gaza

Palestinian Teen Reportedly Killed by Israeli Forces Near Bethlehem, Another Dies of Wounds in Gaza 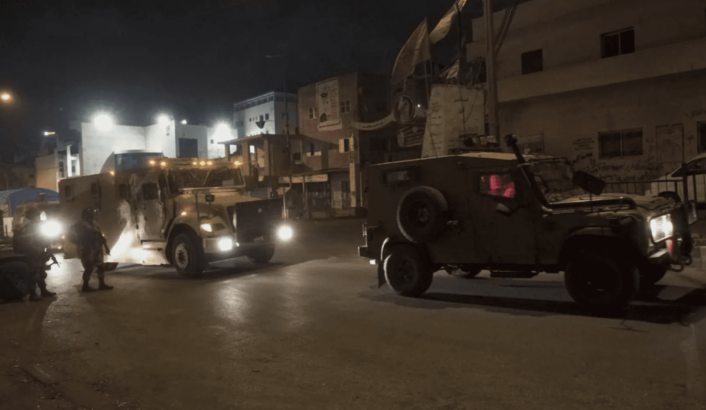 One Palestinian teen was killed during an overnight raid on Dehaisha refugee camp; another died of wounds sustained during unarmed protests at the Gaza-Israel border.

A 15-year-old Palestinian was killed during clashes with the Israeli army in the Dehaisha refugee camp near the West Bank city of Bethlehem, according to Palestinian reports.

The reports say that the Israeli army entered Dehaisha in the early hours on Monday to carry out arrests, when clashes broke out with dozens of residents hurled stones at the soldiers.

The Israeli military said in a statement that two were arrested during an overnight raid on the refugee camp, and that a weapons workshop was found. The army said Palestinians threw firebombs and explosive devices at the soldiers during the clashes.

Six other Palestinians were arrested across the West Bank overnight.

In Gaza, a Palestinian died of wounds sustained during recent clashes with the Israeli army.

On Sunday, an Israel Air Force aircraft fired at Palestinians launching incendiary balloons from the northern Gaza Strip toward Israel, the Israeli military said in a statement.

Israel and Hamas agreed to restore calm in the Gaza Strip after an escalation over the weekend that included rockets fired at Israel from Gaza and dozens of Israeli strikes on the Strip. The escalation began after a Gaza sniper shot and killed an Israeli soldier on the Gaza border. Hundreds of people attended the funeral of Staff Sgt. Aviv Levi on Sunday.