You Are Here: Home → Israeli forces Bomb 25 Sites in Gaza; One Soldier Killed By Gaza Resistance after Four Palestinians killed by Israel 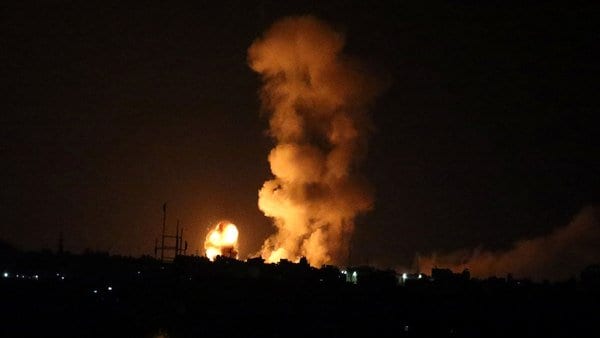 Israel is escalating its attacks on Gaza, air and sea forces bombing at least 25 sites. Israeli Defense Minister said he’s planning to launch a large-scale war in Gaza similar to the one in 2014, in which 2200 people were killed. He said the ‘Palestinian people will pay the price’ for the continued non-violent protests at the border… Two articles below:

As night fell on Friday evening, after Israeli airstrikes killed Palestinian fighters that afternoon, and one Israeli soldier stationed at the border was reportedly killed, reports began coming in on Twitter from different parts of Gaza showing Israeli fighter jets dropping bombs.

The Israeli army said one of its soldier was seriously injured by Hamas fighters near the southern part of the Gaza Strip, during what it called a military activity near the border fence, in southern Gaza, and later died from his wounds.

The name is of soldier has not been released at the time of this report.

The extent of the damage is unknown as of yet, and the airstrikes appear to be ongoing. As the loudspeakers sounded the call to evening prayer from mosques across the Occupied Territory, the sound of Israeli fighter jets filled the sky, and bombs began to fall.

The Israeli army said it targeted and destroyed 25 sites, run by armed resistance groups in Gaza, including monitoring and training centers.

The bombing came just hours after Israeli Defense Minister Avigdor Lieberman stated that he was planning to launch a large-scale war in Gaza similar to the one in 2014, in which 2200 people were killed. In his statement, he said the ‘Palestinian people will pay the price’ for the continued non-violent protests at the border, which have been going on for 100 days.

One woman in Khan Younis filmed a bombing on her phone, and posted it on Twitter with the caption, “I have heard twenty bombs in the last 30 minutes”. Several people live streamed on Facebook from different parts of Gaza, as the bombs began to drop.

The Israeli strikes were carried out in several parts of the Gaza Strip, including sites run by the al-Qassam Brigades, the armed of Hamas, in Rafah and Khan Younis, in addition to missiles fired into the Zeitoun neighborhoods, east of Gaza city, causing several injuries.

The Israeli army claims it “was retaliating to shells fired against its soldiers near Gaza’s eastern border area, while Hamas said it was retaliating to the killing of four Palestinians by army missiles, Friday.

It said that Palestinian fighters fired shells into areas in Shaar HaNegev and Sdot Negev Regional Councils of Settlements, and added that the Iron Dome missile defense system managed to intercept two.

It stated that one shells landed and detonated in an open area in Shaar HaNegev. The reported shells did not lead to any casualties.

The sirens were heard amid an escalation along the Gaza border with Israel.

Fawzi Barhoum, the spokesperson of Hamas in Gaza, said that Israel has chosen the path of war and offensive on Gaza and its people, by murdering unarmed protesters, and added that these killings have raised the bar of retaliation.

“Israel will be held accountable for its crimes; our resistance has the moral and legal duties to protect its people, despite the dire consequences of its retaliation,” Barhoum said, “Shelling will be met my shelling – the resistance is ready, and capable of retaliation and of fighting for the liberation of its people, for breaking the siege and continuing the struggle for independence.”

For a detailed list of Palestinians and Israelis killed since 2000 go here.

The humanitarian situation in Gaza was recently exacerbated by the announcement that Israel would restrict all fuel deliveries to Gaza over the next week and would also tighten its naval blockade off the Gazan coast from six to three nautical miles, a move targeting Gazan fishermen.

Israel’s government has instructed the country’s military to prepare for a major military offensive against the Gaza Strip if the launching of “incendiary kites and balloons” over the Gaza-Israel border is not stopped by this Friday. If those objects continue to cross the border, Israel may decide it has “no choice” but to embark on a military campaign intended to “conquer all of Gaza,” according to a report that aired on Israel’s Channel 10 News on Tuesday and was cited by the Times of Israel.

Israel has claimed that the burning kites and balloons have caused significant damage to nearby farmland and are equivalent to “arson attacks.” Palestinians, however, consider them a form of legitimate resistance to the blockade of the Strip – now in its 11thyear – which has crippled the population economically and resulted in chronic shortages of electricity, fuel, and other basic necessities. The dire situation in Gaza is widely believed to be nearing a dangerous climax, with the vast majority of Gazan drinking water being nonpotable and the UN warning that the entire strip will be uninhabitable in less than two years.

The Channel 10 News report asserted that Israel had delivered its ultimatum to Hamas, which has been democratically elected to govern the Strip since 2007, through Egyptian intelligence officials. Hamas then told those officials that they would work to stop the launching of all burning materials over the border by this Friday in a bid to prevent another war. The report claimed that 60 percent of Hamas positions along the Strip’s border were currently being focused on stopping the launches and that all of its border positions would join those efforts by Friday.

However, Palestinian sources cited by the report claimed that Hamas would only be successful in those efforts were the dire humanitarian situation in Gaza to be relieved in some way, such as the reopening of the Rafah border crossing between Gaza and Egypt. That crossing has been closed for over 24 hours owing to “technical issues” on the Egyptian side of the border and is expected to reopen sometime Wednesday.

However, the humanitarian situation in Gaza was recently exacerbated by the announcement that Israel would restrict all fuel deliveries to Gaza over the next week and would also tighten its naval blockade off the Gazan coast from six to three nautical miles, a move targeting Gazan fishermen.

Speculation that a major military offensive with Gaza is imminent, regardless of whether the “kites and balloons” are stopped, has grown in recent days, particularly after a major Israel Defense Forces (IDF) drill that began on Sunday. That drill, involving the IDF’s 162nd Armored Division, simulated a war with the Gaza Strip and the capture of Gaza City. While the IDF has since asserted that the drill had been planned in advance, the Times of Israel noted that the way in which the drill was publicized was meant as a “tacit threat to Hamas.”

When visiting the IDF’s Gaza Division on Tuesday, Israeli Prime Minister Binyamin Netanyahu only fanned the flames of such speculation after he stated that Israel was already in a “military campaign” against the Strip — adding that “the Israel Defense Forces is [sic] prepared for any scenario.” When asked if his government was working to prevent a military conflict on the Strip, Netanyahu did not comment but instead defended recent government actions, such as the suspension of fuel deliveries to Gaza and the tightening of the naval blockade. “I believe that we are doing the right things. It would be worthwhile to pay attention not only to what we are saying, but to what we are doing,” he told reporters.

In addition to the drill, Israeli airstrikes on Gaza, which have occurred intermittently throughout the year, have drastically increased recently, with Israel’s most intense bombing of the Strip since 2014 taking place this past weekend. Those airstrikes killed two Palestinian teenagers and injured scores more. Hamas retaliated by launching rockets and mortars into Israel, one of which wounded four Israelis in Sderot.

Furthermore, recent reports from earlier this year have cast the probability of another war between Israel and Gaza as highly likely. For instance, one report published in February quoted Hamas officials as stating that the likelihood of a war with Israel in 2018 stood “at 95 percent.” The high probability of a conflict was also mentioned in February by IDF Chief of Staff Gadi Eizenkot, who stated that another Israeli invasion of Gaza was “likely” to occur this year.

Since then, the probability of a conflict has only risen, following Israel’s brutal repression of the Great Return March in Gaza, which resulted in the deaths of more than a hundred unarmed Palestinian demonstrators and wounded over 6,000. That unrest led an Israeli government minister to assert that there are no “innocent people” in Gaza, despite the Strip being home to a million adolescents and children, and another to claim that the only way for the Gaza border to be “completely quiet” would be for Israel “to conquer the Strip.” Given recent events, another major war between Israel and Gaza seems a matter not of if, but when.