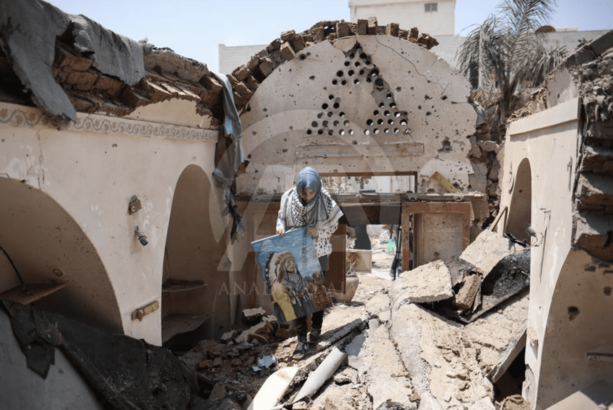 A woman holds a painting among wreckage of buildings during an exhibition that held by a group of Palestinian artists, after Israeli forces hit the area with airstrikes at the Art and Craft Village in Gaza City, Gaza on July 16, 2018. ( Hassan Jedi – Anadolu Agency )

The killing of 2 young Palestinian men was the greatest abomination of the Israeli assault last weekend; another despicable action was the apparently deliberate bombing of the Arts and Crafts Village, destroying Palestinian archeology, items of art, and other valuables – a “deliberate and barbaric assault against Palestinian heritage and history.”

After the Israeli army bombarded Gaza on Saturday, killing two children and causing damage to public, civilian facilities, it became apparent that the soldiers were also targeting a prominent building, meant for preserving and displaying Palestinian archeology, arts and culture.

The Palestinian TV has reported that some of the Israeli missiles targeted the “Arts and Crafts Village”, which is run by the City Council in Gaza, and was founded by late Palestinian President Yasser Arafat, in 1998, with funding from the UNDP.

The Arts and Craft Village building is filled with archeological materials, including pottery, metal crafts, and various historical valuables.

Ihsan Qaja, the head of the Arts and Crafts Village, said that the village, which is approximately 1000 square meters, has four buildings preserving the Palestinian archeological history, arts and crafts. Qaja denounced the Israeli attack, which violates various International laws and targets Palestine’s history preservation projects.

The first building is a Rug House, where authentic rugs, cushion covers, and bedspreads are made using both sheep and goat wool. The second house is an Embroidery and Traditional Fabric Weaving House, where beautiful pillows, dresses, bags, and sheets are embroidered. The third is a Copper House, where copper antiques are exhibited. And finally, a Wood and Ceramics House.

Emad Siyam, the general-director of the Cultural Affairs at Gaza City Council, said the Israeli strikes caused excessive damage to the Arts and Crafts Village, and described the bombings as a “deliberate and barbaric assault against Palestinian heritage and history.”

The Israeli Air Force also fired missiles into a nearby building, killing two children, Amir an-Nimra, 15, and his friend Luay Kahil, 16, in addition to causing injuries to at least 25 other Palestinians.

The Israeli missiles also caused damage to many other surrounding buildings, including the Ministry of Waqf and Endowment, and the Turkish Humanitarian Relief Foundation (IHH).