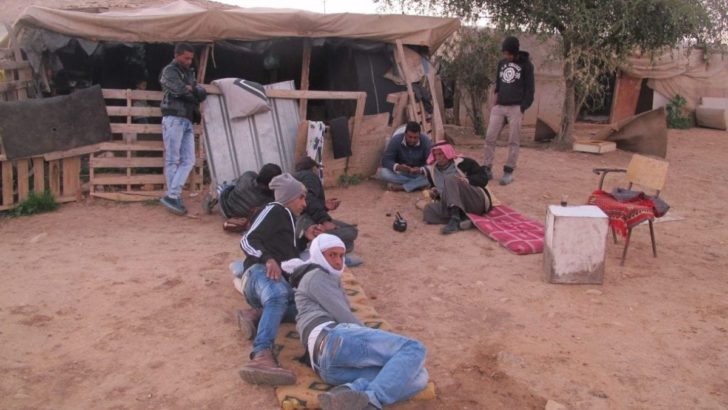 Bedouin of the Jahalin tribe in the unrecognized West Bank village of Khan al -Ahmar.

Israel is obsessing about the “illegal” village of Khan al Ahmar, not because Israel is meticulous about following the letter of the law, but because the law consistently discriminates against Palestinians. Khan al Ahmar is a piece of prime real estate for Israeli expansionism, and the Bedouin are in the way. It’s as simple as that.

In an international survey published last week, Israel was ranked among the 10 most powerful countries in the world, as high as eight in fact. This is quite impressive for a country of just over 8 million people with endless domestic and regional intricacies. How is it, then, that a world force should be putting such a high priority on evacuating a few dozen families from the Khan Al-Ahmar Bedouin village in the Occupied Territories, and exerting its full force to make this happen? What threat is posed to Israel’s national interest by about 180 people of the Jahalin tribe?

At a time when Israel’s Prime Minister Benjamin Netanyahu is alerting the world to existential threats to the Jewish state from Syria, Iran, Hezbollah and Hamas, surely there could have been a more humane way to deal with a few makeshift dwellings belonging to some of the most impoverished people of the West Bank. Let alone that these people have been given a kicking by the Israeli authorities ever since they were originally expelled by the military from their home in the Negev and relocated to the West Bank in the 1950s.

In this tragic episode, the arbitrariness of the Israeli occupation is woven together with its callous approach to the Bedouin people on both sides of the Green Line and the Palestinian people in general, in what appears to be a plot to bisect the West Bank. It is a struggle between two extremely uneven parties. One has the power and the resources, the other has neither, yet has morality on its side. Had it not been for the support of non-governmental organizations and human rights activists in pursuing their legal case in the Israeli High Court of Justice, the residents of Khan Al-Ahmar would have been evicted a long time ago. Anyone observing this village on the side of Route 1 can see that it is no more than a collection of tin shacks and tents serving to shelter the residents and their livestock. One of the only durable buildings in Khan Al-Ahmar is known as the “tire school” and was built thanks to European support.

For Israel to argue that the structures were built illegally — hence the state is within its rights to demolish them and remove their inhabitants forcefully — makes a mockery of notions of law and legality. The piece of land in question is, according to international law, occupied. This renders illegal any action by Israeli authorities there. In their recent petition to the High Court of Justice, representatives of the village presented evidence that the land is private and not owned by the state, as argued by the Israeli government, and, whatever its status in this respect, it is being claimed by an occupying force that has no legitimacy.

Even the argument that, regardless of the abnormality of the situation, there must be some institutional authority to monitor building permissions is utterly hypocritical, considering there are 101 Israeli outposts that are Jewish settlements, which the Israeli state itself sees as illegal but is doing absolutely nothing to remove. On the contrary, there is a concerted effort under way to legalize these outposts retrospectively, despite the fact that their residents are Israeli citizens who, as well as being lawbreakers, have many privileged alternatives rather than having to grab yet more Palestinian land.

Instead of dismantling Jewish outposts, the Israeli authorities are ensuring that they enjoy access to water, electricity and other services. These double standards are outrageous. If the entire conflict between the Israelis and the Palestinians is hopelessly asymmetric, then the case of Khan Al-Ahmar epitomizes this in the most extreme fashion: It is a chilling example of people’s dignity and human rights being violated and trampled on by an appalling abuse of power.

Those who are not familiar with this sad episode will probably be wondering why the government is so adamant about removing such a small number of people from a tiny piece of land, employing its security forces, fighting it in the High Court of Justice and risking further friction with the Palestinians and the international community. There is a rather simple answer to this question, and it is not Israel’s deep commitment to the rule of law, but rather its determination to make a two-state solution unviable.

It is Khan Al-Ahmar’s location within the controversial E1 area that is the source of Israel’s determination to clear it of Palestinians. This small piece of territory of around 4.5 square miles is located between Jerusalem and the major Israeli settlement of Ma’ale Adumim. It has become Israel’s long-term strategy to create a territorial connection between the two cities, which would render a contiguous Palestinian state unfeasible. This leaves the inhabitants of Khan Al-Ahmar as mere pawns in the Israeli government’s march toward burying the two-state solution.

It is consistent with the overall Israeli policy of expanding its settlements and building an infrastructure that would make the removal of such settlements next to impossible, and on the march to achieve this to demonstrate disregard for the lives, well-being and rights of the Palestinians. The residents of Khan Al-Ahmar and similar communities in the vicinity face a daily struggle to generate any income; they have poor access to health, education and welfare services; and their standards of living and access to resources are light years behind those of the Jewish settlements, which are only a stone’s throw away. The Israeli human rights organization B’Tselem has been warning for a long time that, to attain their objective of bisecting the West Bank, “Israeli authorities have made the lives of the residents intolerable, hoping to make them leave their homes, ostensibly of their own volition.”

Occupation is the ultimate manifestation of arbitrary rule over others, as it “endows” the occupiers with absolute power and deprives those under occupation of the ability to conduct their own affairs. The inhuman treatment of the people of Khan Al-Ahmar is showing us the occupation in all its ugliness. It remains for decent Israeli citizens to express their disgust and state clearly that this is not being done in their name; and for the international community to protest in full voice.