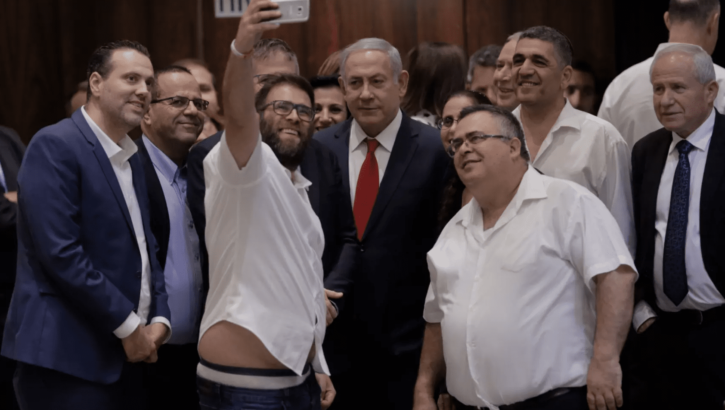 Israel passed early Thursday a controversial bill that officially defines Israel as the national homeland of the Jewish people and asserts that “the realization of the right to national self-determination in Israel is unique to the Jewish people,” sparking outrage from Israel’s Arab community and provoking concern from the international community.

62 lawmakers in Israel’s Knesset voted in favor of the legislation and 55 opposed it. Two lawmakers, Benny Begin (Likud) and Orly Levy-Abekasis (independent) abstained.

The nation-state law also includes clauses stating that a “united Jerusalem” is the capital of Israel and that Hebrew is the country’s official language. Another says that “the state sees the development of Jewish settlement as a national value and will act to encourage and promote its establishment and consolidation.”

It passed after a long and stormy debate that began in the afternoon, with lawmakers voting on hundreds of clauses presented by the opposition that objected to differents parts of the bill.

Immediately after the law passed, Arab lawmakers tore copies in protest, and were subsequently removed from the Knesset plenum hall. Lawmaker Ayman Odeh, chairman of the Joint List, released a statement saying that Israel “declared it does not want us here” and that it had “passed a law of Jewish supremacy and told us that we will always be second-class citiziens.”

“This is our country”

Speaking moments after the bill passed into law, Prime Minister Benjamin Netanyahu said: “This is a defining moment – long live the State of Israel.”

Netanyahu further said that “122 years after Herzl made his vision known, with this law we determined the founding principle of our existence. Israel is the nation state of the Jewish people, and respects the rights of all of its citizens.”

The prime minister also said that “in the Middle East, only Israel respects [rights]. This is our country, the Jewish state. In recent years there have been those who have tried to undermine that and question the principles of our existence. Today we made it into law: This is the country, the language, the anthem and flag.”

As they left the Knesset plenum, Arab MKs from the Joint List party confronted Netanyahu. MK Ahmad Tibi and MK Ayeda Touma-Souliman yelled at Netanyahu: “You passed an apartheid law, a racist law.”

MK Tibi lashed at Netanyahu: “Why are you afraid of the Arabic language?” The premier retorted by saying: “How dare you talk this way about the only democracy in the Middle East?”

Opposition head Isaac Herzog also spoke up at the plenum, saying that “it’s a little sad to me that the last speech I make will be against this kind of backdrop. The question is whether the law will harm or benefit Israel. History will determine. I really hope that we won’t find the fine balance between a Jewish and democratic state to be hurt.” 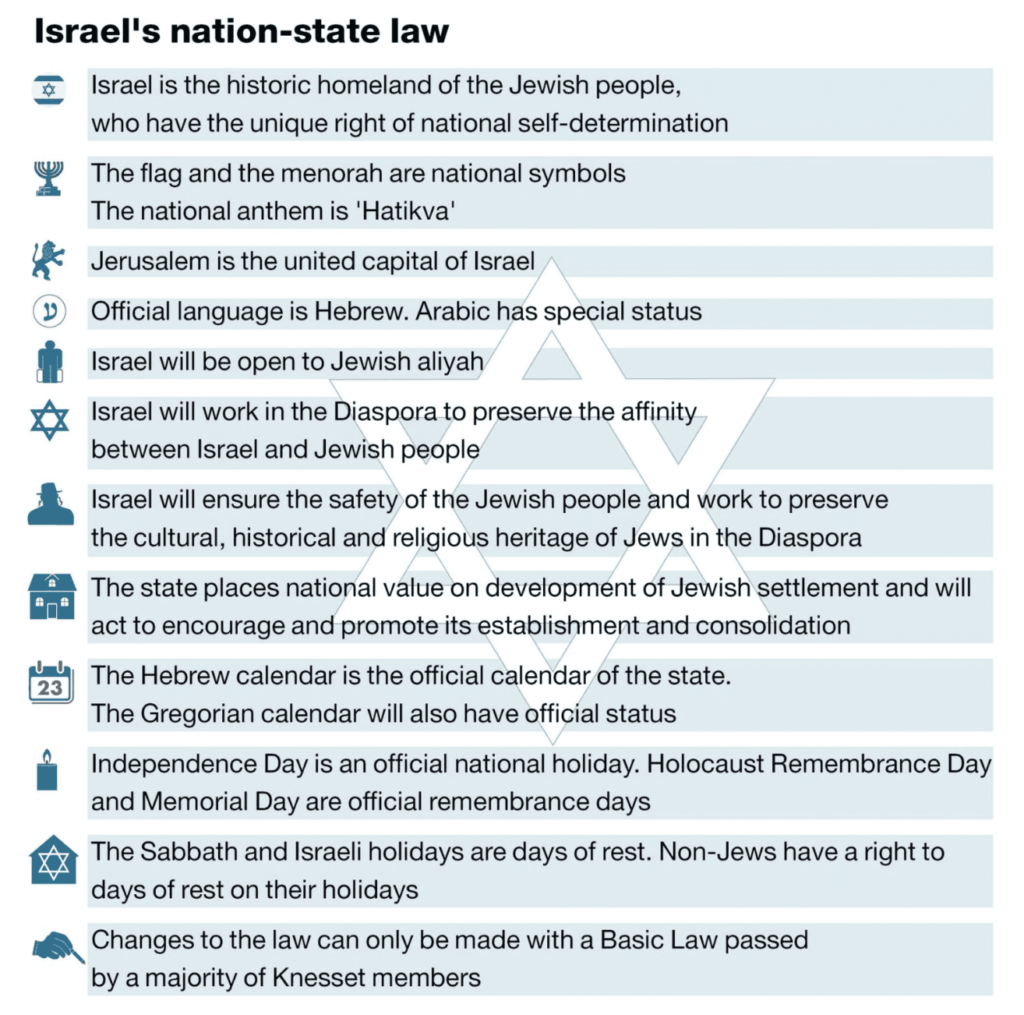 The sponsor of the bill, MK Avi Dichter, said during debates that took place prior to the vote that “unlike the disinformation and fake news that were tossed around [regarding the bill], this basic law doesn’t hurt the culture of minorities living in Israel, doesn’t hurt their sabbaticals and holidays and certainly doesn’t hurt the Arabic language, which remains a mother tongue for 1.5 million of Israel’s citizens.”

The draft bill the Knesset voted on is fundamentally different form the version the coalition had sought to advance in the past decade. Its main clauses were moderated following pressure within the coalition ranks and beyond.

Initially, the bill was intended to significantly limit the discretion of Supreme Court justices’ decisions, requiring them to set the state’s Jewish character above its democratic character in rulings where the two clashed. This clause was removed from the bill already in May.

The most controversial clause, which appeared to pave the way for the creation of communities segregated by nationality or religion, was removed from the legislation earlier this week.

The nation-state law establishes as a basic law, or quasi-constitutional law, a set of values, some of which already appear in existing laws. The law stipulates that Israel is the Jewish nation’s historic homeland and that this nation has the singular right to national self-determination in it. The law anchors the flag, menorah, “Hatikva” anthem, Hebrew calendar, Independence Day and Jewish holidays as national symbols.

The law states that the “whole and united” Jerusalem is the state’s capital, which appears today in Basic Law: Jerusalem. The nation-state law further grants the status of an official language only to Hebrew.

Another controversial clause stipulates that the state will invest resources in preserving Israel’s affiliation to world Jewry, but not in Israel. This wording was demanded by the ultra-Orthodox parties to prevent the state from linking up with the Reform and Conservative communities in Israel.

Adalah Legal Center for Arab Minority Rights in Israel, released in response: “The nation-state law is a colonial law with features of apartheid, which is prohibited by international law because it contradicts the international treaty that bans apartheid crimes. It creates various avenues for segregation in land and housing and incentives based on the principle of ‘advancing Jewish settlement’ both in civil life and in obtaining citizenship based on the law of return and in language and in cultural rights in the name of self-definition.”

“As [the 1956 massacre] in Kafr Qassem was a blatantly illegal order, with a black flag over it, so is a black flag hoisted over this evil law,” he said.

J Street’s president and founder, Jeremy Ben-Ami, harshly criticized the nation-state bill and Netanyahu’s government: “It was born in sin, its only purpose is to send a message to the Arab community, the LGBT community and other minorities in Israel, that they are not and never will be equal citizens. Two months ago we celebrated the 70th anniversary of the Israeli Declaration of Independence, where it was written that the State of Israel ‘will ensure complete equality of social and political rights to all its inhabitants irrespective of religion, race or gender.’ Today Netanyahu’s government is trying to ignore those words and the values that they represent.”

On Monday, Netanyahu said the bill was “very important to guarantee the foundations of our existence, which is Israel as the nation-state of the Jewish people” – though critics say he is mainly keen to drum up support before the next Knesset election, due by November next year.