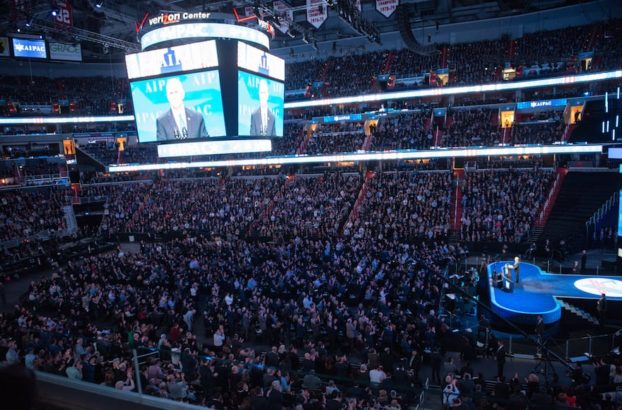 AIPAC 2017 Policy Conference in Washington, D.C., March 26, 2017, where much of its Congressional agenda was promoted.

A synopsis of the many bills concerning Israel before the U.S. Congress:

THE INTERNATIONAL FOCUS of President Donald Trump’s administration seems to have shifted away from the Middle East, at least for the short term, so there have been few major Middle East legislative developments. However, some of the measures promoted by AIPAC’s annual meeting in March continue to gain support.

First among them is H.R. 5141, introduced in the House March 1 by Rep. Ileana Ros-Lehtinen (R-FL), and its companion, S. 2497, introduced in the Senate March 5 by Sen. Marco Rubio (R-FL), the “U.S.-Israel Security Assistance Authorization” bill. Since Ros-Lehtinen, the leading Israel-firster in Congress, has announced that she is retiring at the end of this session, she apparently wants to go out having promoted a full wish list of goodies for Israel, including many security assistance measures, extension of loan guarantees, and enhanced U.S.-Israel cooperation programs. Both bills have more than half the members of their respective houses of Congress as co-sponsors. H.R. 5141 has 274 co-sponsors, including Ros-Lehtinen, and S. 2497 has 70, including Rubio, so they could be brought up for passage at any time. On May 9 the House Foreign Affairs Committee marked up H.R. 5141, ordered it reported to the full House, and recommended that it be considered under “suspension of the rules” (an expedited process that requires a two-thirds vote for passage). But this has not yet happened.

[Action Alert: TELL CONGRESS: Vote NO on $38 billion to Israel!

The so-called “Israel Anti-Boycott” bills, also promoted by AIPAC, have made some progress. Both S. 720, introduced by Sen. Benjamin Cardin (D-MD) in March 2017, and H.R. 1697, introduced by Rep. Peter Roskam (R-IL) the same month, claim that the BDS (Boycott, Divestment and Sanctions) movements penalize firms doing business in Israel, but in fact they are about doing business in Israel’s colonies, not Israel. As reported in previous issues, both the ACLU and Amnesty International have expressed their opposition to the bills because of their attacks on free speech, but congressional supporters of the bills continue to ignore those objections, as well as decades of bipartisan distinction between Israel and its West Bank colonies. S. 720 still has 56 co-sponsors, including Cardin, but H.R. 1697 now has 289, including Roskam. A related measure, H.R. 6095, was introduced June 13 by Reps. Ron DeSantis (R-FL) and Bob Goodlatte (R-VA). It would “prohibit the boycotting of countries friendly to the U.S.” A DeSantis press release makes it clear that the purpose of the bill is to protect Israel and its colonies from boycotts by foreign nations.

Similarly the “Anti-Semitism Awareness” bills, S. 2940 in the Senate and H.R. 5924 in the House, have nothing to do with combatting anti-Semitism but, instead, are an attempt to squelch criticism of Israel on U.S. campuses. The bills would endorse an expansive definition of anti-Semitism that would define most anti-Israel speech and actions as being anti-Semitic. S. 2940, introduced May 23 by Sen. Tim Scott (R-SC), now has five co-sponsors, including Scott, and H.R. 5924, introduced by Roskam, also on May 23, now has 39 co-sponsors, including Roskam. [RELATED: International campaign is criminalizing criticism of Israel as ‘antisemitism’]

The purpose of the bill is to protect Israel and its colonies from boycotts by foreign nations.

The non-binding H.J.Res. 135, “supporting Israel’s right to defend its borders,” was introduced June 5 by Rep. Lee Zeldin (R-NY) with 11 co-sponsors. It would accept the Israeli government’s position that Hamas bears total responsibility for all Palestinian deaths and injuries caused by Israel in Gaza, and that all Israeli actions in Gaza are self-defense.

Most of the measures urging greater U.S.-Israel cooperation have made little progress, but the previously described catch-all resolution H.Res. 785, introduced in March by Rep. Michael Conaway (R-TX), has gained 77 co-sponsors and now has 124, including Conaway. In addition to urging unspecified increased U.S.-Israel cooperation, it gratuitously supports Trump’s Dec. 6 declaration recognizing Jerusalem as Israel’s capital.

Another resolution was introduced congratulating Israel on its 70th anniversary. S.Res. 502 was introduced May 9 by Sen. Orrin Hatch (R-UT), with eight co-sponsors.

However, that good news was offset by U.S. Ambassador to the U.N. Nikki Haley’s June 19 announcement that the U.S. is withdrawing from the U.N.’s Human Rights Council. Haley claimed that the Council has become a “protector of human rights abusers and a cesspool of political bias.”  But in fact, the main focus of U.S. criticism of the UNHRC has been its calling out of Israel for its human rights violations.

The withdrawal made pointless H.Res. 728, introduced in February by Reps. Joe Wilson (R-SC) and Neal Dunn (R-FL), criticizing the UNHRC’s treatment of Israel.

UNRWA was the target of two new bills.  H.R. 5898, introduced May 21 by Reps. David Cicilline (D-RI) and Zeldin, would “require the secretary of state to develop a strategy on administration policy regarding UNRWA.” The bill’s text makes it clear that the purpose of the “strategy” is to eliminate or reduce U.S. contributions to UNRWA. And H.R. 6034, introduced June 7 by Rep. David Young (R-IA) with three co-sponsors, would require the secretary of state to “submit annual reports reviewing the educational material used by the Palestinian Authority or the UNRWA.”

TRUMP IGNORES LETTER URGING HIM NOT TO ABANDON JCPOA

Then on June 6, Durbin and seven co-sponsors introduced S.Res. 535 “reaffirming the U.S. commitment to the North Atlantic Treaty Organization.” The measure includes a clause—after several statements from U.S. and international officials confirming that Iran is in compliance with the nuclear agreement—saying that “despite these statements, overwhelming evidence, and the appeals from several NATO allies, President Trump reinstated sanctions on the Government of Iran and unilaterally withdrew the U.S. from the JCPOA on May 8, 2018.” 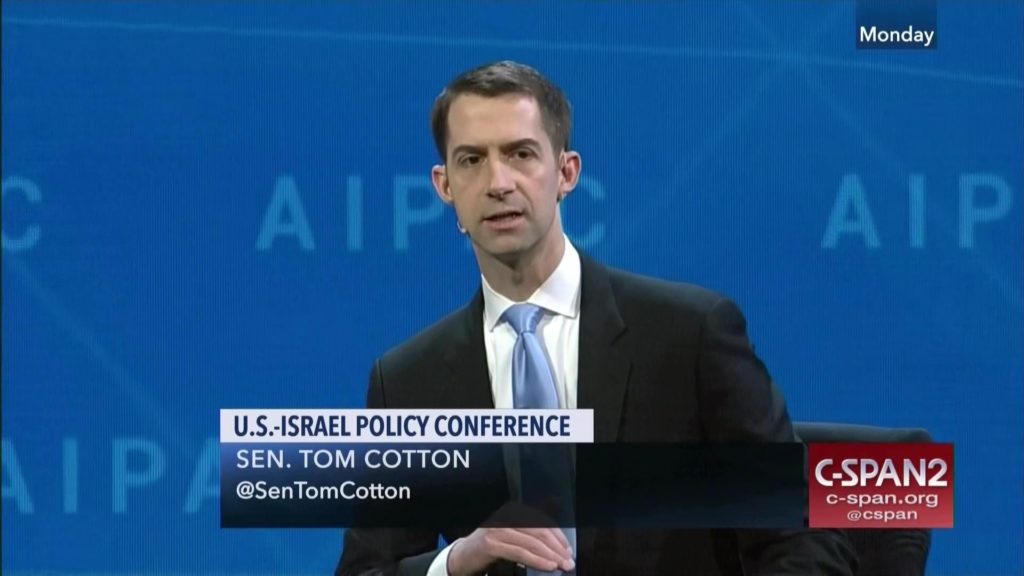 Trump’s withdrawal from the JCPOA apparently stalled action on most Iran sanctions measures. Two exceptions were S. 2353, the “Iran Leadership Asset Transparency” bill, introduced in the Senate in January by Sen. Tom Cotton (R-AR), which now has 12 co-sponsors, including Cotton, and S. 2365, the “Iran Human Rights and Hostage-Taking Accountability” bill, introduced in January by Rubio. It now has five co-sponsors, including Rubio.

H.R. 4821, introduced in January by Roskam, to “impose sanctions against entities owned or controlled by the armed forces of Iran,” still has 31 co-sponsors, including Roskam. However, the AIPAC-pushed H.R. 5132, introduced in March by Royce, which would expand sanctions against Iran’s Revolutionary Guard Corps, has gained 22 co-sponsors and now has 215, including Royce.

The previously mentioned measures regarding U.S.-Gulf nuclear cooperation have made scant progress. The positive H.Res. 795, “Recognizing the U.S. role in the evolving energy landscape of the Gulf Cooperation Council countries,” introduced in March by Reps. Joe Wilson and Donald Norcross (D-NJ), still has no more co-sponsors.

The opposing measure, H.R. 5357, was introduced in March by Ros-Lehtinen.  Consistent with her history of opposing anything that might benefit Saudi Arabia, it would “require congressional approval of agreements for peaceful nuclear cooperation with foreign countries.” It now has seven co-sponsors, including Ros-Lehtinen. A new measure, S.Res. 541, was introduced June 12 by Sen. Jeff Merkley (D-OR), with two co-sponsors. It would “express the sense of the Senate that any U.S.-Saudi Arabia civilian nuclear cooperation agreement must prohibit the Kingdom of Saudi Arabia from enriching uranium or separating plutonium on its own territory, in keeping with the strongest possible non-proliferation ‘gold standard.’”

S.J.Res. 59, “authorization for the use of military force against the Taliban, al-Qaeda, the Islamic State in Iraq and Syria, and designated associated forces,” introduced in April by Sens. Bob Corker (R-TN) and Tim Kaine (D-VA), still has two Democrat and two Republican co-sponsors. The measure does not include a sunset clause, but instead would require presidential and congressional review, to “include a proposal to repeal, modify, or leave in place this joint resolution.” S.J.Res. 61, an AUMF measure introduced May 23 by Merkley, does include a sunset clause, and also specifically limits the use of force to Iraq and Afghanistan, so it may draw broader support, although this hasn’t happened yet.

NEW BILL WOULD REQUIRE REPORT ON U.S. STRATEGY IN SYRIA

While H.R. 4681, introduced in December by Rep. Eliot Engel (D-NY) “to limit assistance for areas of Syria controlled by the government of Syria or associated forces,” still has 26 co-sponsors, including Engel, a new Syria bill, S.2882, was introduced May 17 by Sen. Catherine Cortez Masto (D-NV).  It would require the president to submit to Congress a report “that sets forth a detailed description of the strategy of the U.S. in Syria.” 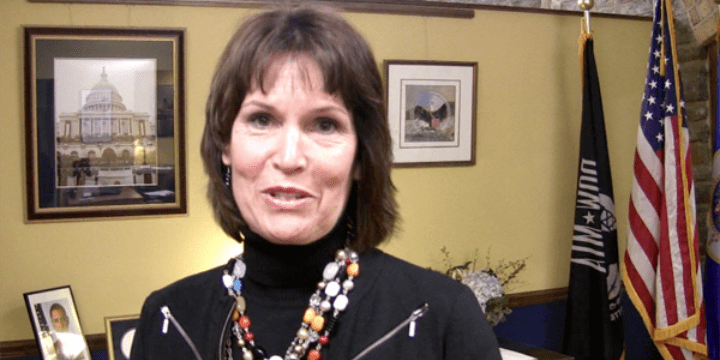 The increasingly timely bill introduced in November by Rep. Betty McCollum (D-MN), H.R. 4391, which would “require the secretary of state to certify that U.S. funds do not support military detention, interrogation, abuse, or ill-treatment of Palestinian children,” continues to gain support. It now has 30 Democratic co-sponsors, including McCollum.

Shirl McArthur is a retired foreign service officer. He lives in the Washington, DC metropolitan area. This article is from the Washington Report on Middle East Affairs.