You Are Here: Home → Israel vows to ‘worsen’ conditions for Palestinian prisoners 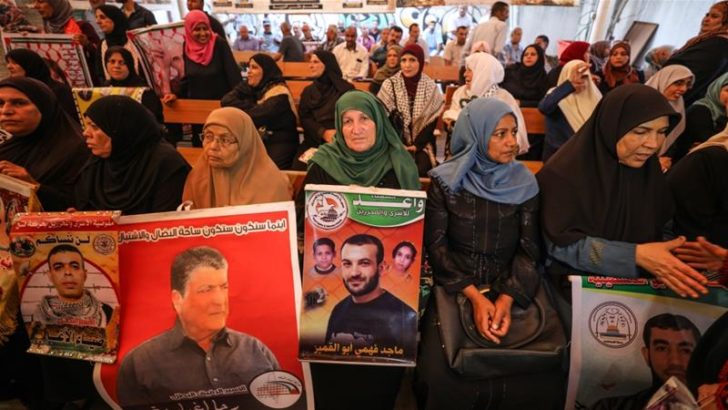 People gather in front of International Committee of the Red Cross office in Gaza City to show their support to Palestinian prisoners in Israeli jails [File: Anadolu Agency]

Israel is already on legal shaky ground when it comes to its prison system, with 5,500 Palestinian prisoners currently incarcerated, torture a common experience, a 99% conviction rate for Palestinian brought to court, and sentences up to 20 years for throwing stones.

The Israeli security minister has unveiled new plans to make the prison experience even more problematic, such as limiting water supplies and cutting number of family visits.

Past experience should suggest to Israel that more vigorous oppression only makes Palestinians more determined and shines a brighter light on the illegal occupation – but as usual, the option of greater cruelty is too attractive to resist.

The planned moves, which are expected to come into force in the coming weeks after being approved by the Israeli cabinet, were sharply criticised by Palestinian leaders and activists who described as them as another escalation of human rights violations by Israel.

Speaking to reporters on Wednesday, Erdan said the plan will also see jails removing cooking rights and limiting prisoners’ access to television as well as blocking funds to the Palestinian Authority.

The minister said that family visits had already been halted for prisoners affiliated with the Palestinian movement Hamas.

“The plan also includes preventing members of the Knesset [Israel’s parliament] from visiting Palestinian detainees,” added Erdan, who last year set up a committee to make prison conditions harsher for those who “committed acts of terrorism”.

The policy of separating Hamas prisoners from those affiliated with rival Palestinian faction Fatah will also come to an end, as Erdan said that holding inmates in cells based on organisational affiliation resulted in “strengthening their organisation identity”.

The minister also said that there will be “clear limits” on the amount of water a prisoner consumes each day, including a cap on the number of times they are allowed to shower.

‘Israel behaving as if above international law’

Mustafa Barghouti, head of the Palestinian National Initiative party, told Al Jazeera that the Israeli government acts like it has a free hand to oppress Palestinians in any way they want.

“The only way to force Israel to abstain from this behaviour is to impose sanctions on Israel,” he said, speaking from the occupied West Bank city of Ramallah.

“Israel is behaving as if it is above international law and this must change.”

The Palestinian Prisoners’ Commission denounced Erdan’s plans and said they were an attempt to make Palestinian prisoners’ lives even more unbearable.

Qadri Abubaker, the head of the Prisoners’ Commission, called for a strong national stand against these measures.

Such decisions and laws “calls for everyone to rally at the official, popular, legal, media and human rights level to expose these arrogant policies against our heroes in prisons”, he told Wafa, the official Palestinian news agency.

According to official statistics, the number of Palestinian prisoners behind bars has reached 5,500, including 230 children and 54 women.

Rights groups say more than 1,800 are in need of medical care, with about 700 suffering from serious or chronic illnesses.

Many Palestinian prisoners say they have been subject to torture and violence while in custody. There have been many protests against poor conditions in recent years, including several hunger strikes.

During Wednesday’s press conference, Erdan said the Israeli government would “not be deterred by threats and [hunger] strikes”.

“We must make conditions worse [for prisoners] to fulfil our moral duty to terror victims and their families,” he added, going on to assert  that the Israeli prison service was ready to “deal with any scenario”.