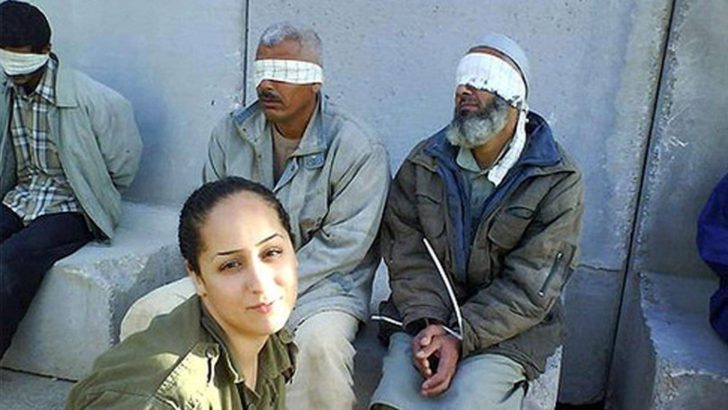 Israeli soldiers periodically take “selfies” with their prisoners. This 2015 photo is by a soldier who posted a series to her Facebook account in an album entitled: “Army… the most beautiful time of my life. :)”

After handcuffing and beating two brothers, one a teenager, Israeli soldiers took a “selfie” with the injured prisoners, a common practice. Israeli forces conducted 196 search and arrest operations across the West Bank, including nine children, between October 10 and October 23.

Two Palestinian prisoners, including one teenager, gave testimonies to the Palestinian Committee of Prisoners’ Affairs, detailing the abuse and harassment they faced at the hands of Israeli forces during their arrests.

The committee released a statement on Monday saying that Israeli forces raided the home of brothers Tariq Baajeh, 26, and Ahmad Baajeh, 19, in the Qalqilia-area town of Jayyus in the northern occupied West Bank around midnight on Sunday.

According to the brothers’ testimonies, soldiers handcuffed and blindfolded the brothers before transferring them to a military zone near Qalqiliya in a military jeep.

“The Baajeh brothers were assaulted and insulted the entire time they were held at the military zone,” the statement said, adding that after the soldiers beat up the brothers, soldier took a “selfie” with the injured brothers “in order to provoke them.” [Such actions are common. See this article about a 2015 incident.]

The brothers were then transferred to the Huwwara detention center near Nablus, and then to the Megiddo prison north of the West Bank, where they were strip searched.

According to United Nations documentation, Israeli forces conducted 196 search and arrest operations across the West Bank, including nine children, between October 10 and October 23.

Human rights groups have widely documented the abuse of Palestinians by Israeli forces during night raids, and the harsh interrogation practices used to force their confessions, which has long been the target of criticism by the international community.

Defense for Children International – Palestine has said their research showed that almost two-thirds of Palestinian children detained in the occupied West Bank by Israeli forces had endured physical violence after their arrest.