You Are Here: Home → The Legitimacy of Family Compensation for Palestinians Killed, Injured, and Imprisoned 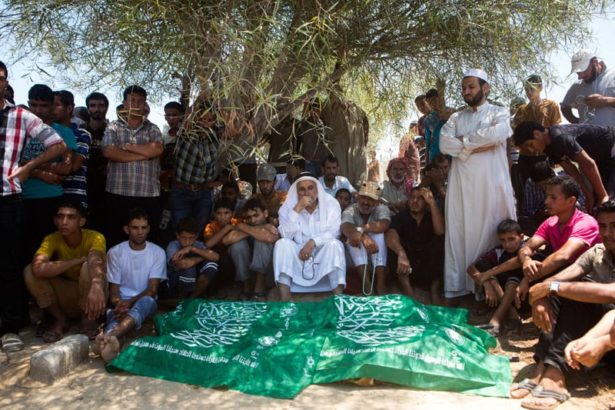 Members of the Abu Jameh family gather in the cemetery to mourn their loved ones. 24 family members were killed in an attack on July 20, 2014.

JTA reports on what would seem to be a no-brainer: a bill requiring that aid money to the PA be withheld if the PA continues its Martyrs Fund or “pay to slay” policy. Of course nothing is quite as simple as meets the eye.

WASHINGTON (JTA) — Top Senate Democrats said they were closer to signing on to a Republican-backed bill that would slash aid to the Palestinian Authority if it did not stop subsidizing Palestinians jailed for attacks on Israel. [Ed. note: Info on bill is here]

Senate Minority Leader Charles Schumer told attendants at the Orthodox Union’s annual Washington action day on Thursday that he would support the Taylor Force Act or legislation similar to it if the Trump administration is unable to get the Palestinian Authority to stop the payments. [Ed. note: Senator Schumer is a major advocate for Israel; see video.]

“Abbas has to stop making payments to terrorists and their families, and all elected officials should call them out,” Schumer said.

The United States now gives the Palestinian Authority about $500 million in annual aid. The bill, which was introduced by Republican Senators Ted Cruz and Lindsey Graham, would only leave the portion for security assistance — about $60 million in 2013. Cruz also attended the Orthodox Union event.

“We’re going to find a way to pass the Taylor Force Act,” Senator Cardin said, suggesting that he wanted changes to the bill before he could fully endorse it. The measure was named for the American killed in a 2016 stabbing attack in Tel Aviv.

The Taylor Force Bill “prohibits certain assistance…from being made available for the West Bank and Gaza” unless the State Department is satisfied that the PA is working to end violence against US and Israeli citizens, is publicly condemning such acts and cooperating in investigating them, and has “terminated payments for acts of terrorism.” (Here is a list of cosponsors of the bill.)

If the bill becomes law, the US may withhold 88% of aid to the Palestinian Authority until it complies.

Israel has also withheld money from the PA in the past—tax revenues that are collected by Israel but that actually belong to the Palestinians, about $125 million per month. For example, funds were held back by Israel in November 2012 as a punishment for the UN vote which brought de facto recognition of Palestine’s statehood, and again in January 2015 as a penalty for Palestine’s application to join the ICC.

The transfers are an important revenue source for the cash-strapped Palestinian government.

Palestinians already suffer economically from the hardship of a brutal fifty-year occupation. According to a study by the UN Conference on Trade and Development, agriculture and industry have suffered huge losses. One reason is the inaccessibility of “Area C,” which accounts for over 60% of West Bank land (66% of its grazing land) and is off-limits to Palestinians. The report estimates that “the occupation of Area C costs the Palestinian economy the equivalent of 35% OF GDP.”

Gaza is also barred from half of its farmland and 85% of its fishery resources. Over 2.5 million productive trees have been vandalized or uprooted since 1967; 82% of Palestinian groundwater has been confiscated by Israel, and must be bought back by Palestinians at inflated prices.

Even tourism has been “annexed”: Israel has “rebranded” popular West Bank sites as being in the “Holy Land,” obscuring their Palestinian identity. Israeli tour guides control most visitors, making it easy to take a day trip to Bethlehem, but then stay in an Israeli hotel.

Adding to its many economic advantages, Israel garners $10 million a day in aid from the United States, compared to the $500 million per year that Palestine receives now and is in danger of losing.

Israel uses its huge aid budget to finance the occupation and fight wars with Gaza—both of which are illegal according to international law and condemned by almost every country in the world. Its assaults on women and children, as well as noncombatant men, is well documented. For example, the Middle East Children’s Alliance reported that “1,518 Palestinian children were killed by Israel’s occupation forces from the outbreak of the second Intifada in September 2000 up to April 2013…meanwhile the number of children injured by the Israelis since the start of the Second Intifada against Israel’s occupation has now reached 6,000. That number means that one Palestinian child was killed by Israel every 3 days for almost 13 years.”

However, Israeli leaders argue that the “hate-filled climate” against Israel was created not by occupation and war, but by “fiery speeches” by Palestinian leaders and “venomous” Facebook posts.

Compensation in the event of death or injury

Payment to the family of a service member killed or injured in the line of duty is a common practice. In America, for example, families receive a one-time payment to help surviving members deal with financial hardships connected with the loss of their loved one. This “death gratuity” is currently $100K.

Israel too has a compensation program for families of IDF soldiers killed or injured in the line of duty.

Because the Palestinian Territories are forbidden from having armed forces, their resistance against the occupation is carried out by civilians. In the event of their death, injury, or imprisonment their families face the same type of struggles that any service member’s family would face, and the Palestinian Authority provides for them through the so-called “Martyrs Fund.”

Prime Minister Benjamin Netanyahu plans to withhold revenue from the PA until the fund is dismantled, as he considers these payments “an incentive for murder.”

Republican Senator Lindsey Graham, leading sponsor of the Taylor Force bill, fails to make the connection between the US and Israeli compensation programs and the Palestinian Martyrs Fund, declaring that “the practice is inconsistent with American values, inconsistent with peace, and inconsistent with decency.”

Not a reward for violence

Nasser Tarayreh, whose son was killed after stabbing an Israeli girl, explains, “I don’t think anyone is willing to sacrifice his life for money. And for us as a family, all the money in the world won’t replace my son.” In fact, the money would be needed to provide shelter soon, as their home was scheduled for demolition—an Israeli practice in retribution against the families of attackers. Nasser will receive $350 a month from the Martyr’s Fund.

Many “martyrs” were not killers or attackers, but were themselves killed while walking to school, participating in a peaceful demonstration, or sleeping in their beds. If they died as a result of Israel’s brutality, they bear the title of martyr.

The fund also compensates families of prisoners and detainees. Samidoun Palestinian Prisoner Solidarity Network reported that “the Israeli occupation arrested 6,440 Palestinians in 2016, including 1332 children and 164 women,” in addition to members of the Palestinian Legislative Council and journalists.

The fund had a budget of $170 million in 2016 and makes monthly payments to about 35,000 Palestinian families. Qadora Fares, who works with the system, explains, “This is a kind of social protection for the family. The children of the prisoners and martyrs and wounded have the right to go to schools, hospitals and get food.”

Fox News reported that the Washington Post strongly condemned the support of victims’ families in the Palestinian resistance. Fox quoted the WP as saying, “The PA is running a bounty system. Payments to terrorists and their families are enshrined in Palestinian law, provided for in the PA budget, and indirectly supported by foreign aid…incentivizing the murder of civilians is barbarism…”

It should be noted that this quote is not from a WP journalist, but part of an opinion piece by Israel partisan Thane Rosenbaum. Ironically, Rosenbaum authored Payback: The Case for Revenge, a book presenting the theory that “if the law won’t set things right, which it so often fails to do, then it’s ok, indeed moral, for us to do so ourselves”—a theory with which many Palestinians would, to Rosenbaum’s dismay, agree. Rosenbaum has elsewhere implied that a child whose father works for Hamas is actually a target by association, and that therefore it is morally acceptable to kill children.

Daniel Larison of the American Conservative said in his review of Payback, “Rosenbaum’s argument is extremely similar to the justifications that terrorist groups use when they target civilians in their own attacks…It is very important to reject this logic no matter where it comes from or whose cause in a conflict it is being used to advance, because this is the logic that has been used to justify countless atrocities down through the years.”

In an interview for the Institute for Palestine Studies, Palestinian psychiatrist Eyad al Sarraj explained that many Palestinians who turn to violence have themselves witnessed great violence perpetrated on their families. “During the first intifada, studies showed that 55 percent of the children had witnessed their fathers being humiliated or beaten by Israeli soldiers.

“The psychological impact of this is stunning. The father, normally the authority figure, comes to be seen as somebody who is helpless, who can’t even protect himself–let alone his children. So children became more militant, more violent…The militant ones believe that if they die as suicide fighters in the struggle for justice, they are conquering defeat and death itself.” Sarraj continued, “they wouldn’t turn their bodies into bombs if they had F-16s, Apache helicopters, tanks, or a tiny fraction of the weapons Israel gets from the United States.”

Sarraj describes violence as a manifestation of a deep-seated issue: “Suicide bombings and all these forms of violence–I’m talking as a doctor here–are only the symptoms, the reaction to this chronic and systematic process of humiliating people in effort to destroy their hope and dignity. That is the illness, and unless it is resolved and treated, there will be more and more symptoms of the pathology.”

Sarraj expressed deep opposition to Palestinian violence, but distinguished between the martyrs and their families: “As a Palestinian, as an Arab, as a Muslim, and as a human being, I feel obliged to support them. I cannot leave their children in poverty–I have to do what I can to leave them some hope and dignity.”

The face of the Fund

One story that illustrates both the tragedy that qualifies Palestinians for the Martyrs Fund and the experience that produces even more martyrs, is that of Abu Jameh. At dinnertime on July 20th 2014, Israeli planes bombed an apartment building in Gaza, killing 24 members of family—a woman, her son, four of her daughters-in-law, and 18 of her grandchildren. One member of Hamas was also present for the meal. Abu Jameh who survived but was injured, lost his pregnant wife and six of his seven children. He reflected, “there is nothing left. It is the end for us,” and added later, “I will marry again four times, and I will have 10 sons with each wife, and they will all be in the resistance.”

Emmanuel Nahshon, Israeli Foreign Ministry spokesman got it wrong when he stated, “Terror has become a comfortable business for families.”