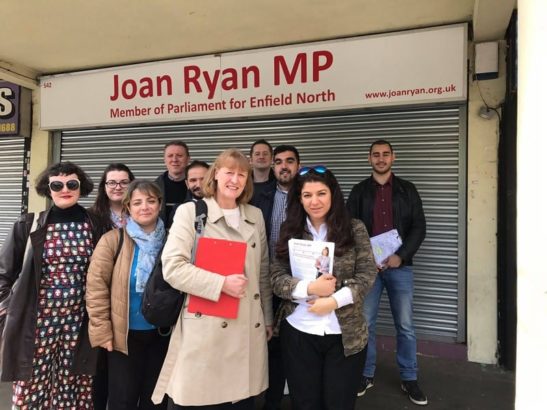 Labour Friends of Israel chair Joan Ryan, center, suggested Theresa May would be a better prime minister than Jeremy Corbyn.

“I was wrong about Jeremy Corbyn” said failed Labour leadership challenger Owen Smith the day after the UK general election.

Corbyn gained 30 seats for Labour despite media predictions he could lose as many as 80.

In so doing, Corbyn denied Conservative Prime Minister Theresa May her majority – a triumph for Labour relative to the consensus that the party was heading for disaster.

Smith’s line summed up the general attitude of Corbyn’s critics in the Parliamentary Labour Party.

Three-quarters of them called for him to go last year, in a failed coup which was swiftly followed by Smith’s leadership challenge.

But in the wake of last week’s unexpected electoral gains, once-critical Labour lawmakers and political commentators have lined up to eat some of the same humble pie as Smith. In a gesture of reconciliation, Corbyn brought Smith back into the Shadow Cabinet this week.

Some hardliners, however, have rejected Corbyn’s outstretched hand – none more so than the party’s internal Israel lobby.

Writing in the right-wing Jewish Chronicle on Wednesday, Labour Friends of Israel chair Joan Ryan demanded that Corbyn cut ties with the Palestine Solidarity Campaign to prove Labour is a “credible party of government.”

Ryan’s demands are extraordinary, especially since she used the general election campaign to bad-mouth her own party and its leader.

The PSC responded to Ryan, saying that “our values are those of principled respect for the human rights of everyone – Palestinian and Israeli – as well as international law.”

“We know that these are the values to which Jeremy Corbyn subscribes,” the group added. “That is why we are proud to have him as a patron.”

Ryan also slammed Corbyn as having “long-standing involvement with anti-Israel activism” and called for him to atone by holding talks with Israel’s Labor Party – a racist organization which has recently been in talks to join the hard-right government of Prime Minister Benjamin Netanyahu.

She also threatened to revive yet again the anti-Semitism witch hunt which engulfed Labour last year, when dozens of members were suspended without due process, often based on grossly exagerated or entirely fabicated charges. [Editor’s note: See related article.]

Ryan herself was caught personally engaging in concocting false anti-Semitism charges against a party member who questioned Labour Friends of Israel’s position on Israeli settlements, which are illegal under international law.

Yet in her Jewish Chronicle article, Ryan demanded that Corbyn “address adequately the problem of anti-Zionist anti-Semitism within Labour’s ranks.”

In fact, over the last year, Corbyn repeatedly denounced anti-Semitism and ordered an independent inquiry – the Chakrabarti report – which has led to institutional changes within Labour.

Ryan ran a defeatist election campaign, which amounted to sabotage of the Labour leader’s chances of entering 10 Downing Street as prime minister.

“Many” local people “tell me they have more confidence in Theresa May as prime minister than they would have in Jeremy Corbyn,” she wrote in a letter to voters in her district.

Despite her attacks on Corbyn, Ryan, like dozens of other Labour lawmakers who had worked against him, was re-elected on the coattails of his popular manifesto.

Yet anonymous “figures” and “sources” have continued to denounce Corbyn to The Jewish Chronicle and other right-wing media this week.

The Jewish Chronicle quoted a “senior pro-Israel Labour” source explaining that the tactic used by Ryan of talking down the party’s chances had been part of a broader pro-Israel strategy.

“I told people Corbyn absolutely would not win and they could vote Labour,” the source said. “We managed to get people who hate Corbyn to vote for Corbyn’s Labour Party.”

“Bang on his door”

But these pro-Israel elements are evidently shocked and disappointed that under Corbyn’s leadership the party did too well at the ballot box.

The source indicated that the pro-Israel forces would continue to undermine Corbyn just as the Labour Party is more confident than it has been in years.

“Communal groups” – a reference to pro-Israel organizations that claim to speak on behalf of the Jewish community – “will have to do what they did before and either ignore him [Corbyn] or work around him,” the source said.

The source also predicted that pro-Israel lawmakers will “be happier to bang on his door now – about anti-Semitism or Israel.”

Like other Corbyn critics, Tulip Siddiq, a Labour Friends of Israel supporter, was re-elected with an increased majority – despite her own efforts to keep the anti-Semitism witch hunt rumbling.

After the election, she told the Jewish News that “there are elements of anti-Semitism in the party that have not been dealt with properly.”

She vowed the she, along with Labour Friends of Israel leader Ryan and fellow member Wes Streeting “will stand up … we can’t go on like this.”

Failed Labour parliamentary candidate Jeremy Newmark, a veteran leader in the UK’s Israel lobby, wrote in The Times of Israel on Wednesday that after the election, “many things remain unchanged” and “we still need to turn a corner regarding anti-Semitism in the Labour Party.”

Newmark called for the Chakrabarti report to be “revisited,” despite the fact that the Jewish Labour Movement, the internal party pro-Israel group that he heads, had initially welcomed it last year as “sensible and firm.”

Newmark also called for a mooted Labour Party rule book change put forward by his pro-Israel group to again be pushed at the party conference in September.

The change would “recognize that it is not acceptable to use Zionism as a term of abuse” – potentially making criticism of the Israeli state’s official ideology an infraction punishable by expulsion from Labour.

The rule change would also apply to Zionism a definition of a racist incident “which places particular value upon the perception of the victim/victim group.” In other words, a concept developed to protect vulnerable groups from bigotry would be co-opted to protect Israel from criticism by giving Israel’s apologists the right to determine which criticisms of Israel they deem “anti-Semitic.”

If adopted, such a rule would further conflate anti-Semitic bigotry against Jews, on the one hand, with anti-Zionism – opposition to Israel’s exclusivist ideology that discriminates against Palestinians – on the other.

Blurring the line between anti-Semitism and anti-Zionism has been a key objective of Israel and its surrogates.

Newmark also revealed the lines of attack the Israel lobby will use against Corbyn. “The immediate agenda is clear,” he wrote, calling for two prominent Labour critics of Israel to be expelled: former London mayor Ken Livingstone and Jewish anti-racism activist Jackie Walker.

None of the smears used by hostile media and right-wing Labour lawmakers last year seemed to work.

Even the false and grossly exaggerated charges of anti-Semitism had their limits.

But bereft of ideas to stop Corbyn eventually entering Number 10 – as now looks increasingly plausible – Israel’s allies in the Labour Party appear determined to bring this manufactured crisis back.