You Are Here: Home → Review of Thomas Suarez’s “State of Terror” 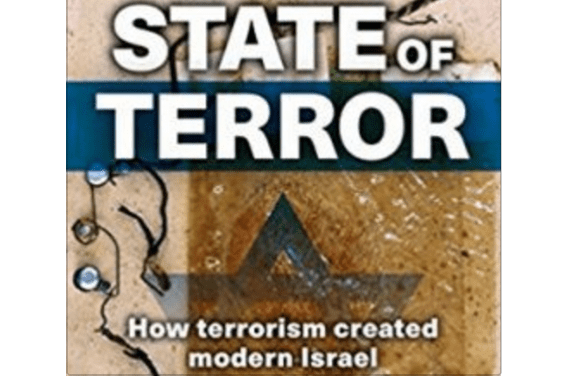 Thomas Suarez’s “State of Terror” is a meticulously documented history of Zionism from its early stages in Israel until 1956. It is the story of how a number of secular Jews successfully installed a religious state located on the land of another nation. The established myth is that after centuries of antisemitism culminating in the Holocaust, the Jews ‘deserved’ Israel, the ‘land without a people for people without a land.’ Historical accounts often deepen and are refined with time and study. Suarez’s book (along with a few others such as Alison Weir’s “Against Our Better Judgment”) convincingly refutes the generally accepted history entirely.

Suarez points out that in 1897 an early Zionist cabled the news to his co-conspirators that Palestine was already densely populated. What followed was a terrorist conspiracy to take that land that is shocking in its scope and violence.

Starting around 1918, in what is now Israel, the Irgun, the Lehi (Stern Gang) the Haganah and the Jewish Agency operated at various times as competing and cooperating gangs of thugs. They raised money by robbery and extortion, extracting ‘tributes’ from local businesses, bombing those who failed to pay. The Zionist gangs assassinated Palestinians, police, the British, and Jews whose opinions diverged from theirs.

The war did not temper their violence. When the British consolidated three boats of refugees onto the ship Patria in Haifa with the intention of taking them to a displaced persons camp in Mauritus, the Haganah bombed the ship of refugees. Over 267 people died, among them 200 Jews. Zionists spun the story as a reenactment of the biblical story of Masada, claiming that the passengers of the Patria heroically committed mass suicide by bombing their own ship when they failed to reach Israel.

During and after World War II, the Zionists demanded with remarkable if not complete success that Jews be segregated from other soldiers and then segregated within displaced persons camps. Suarez cites pro-Zionist Churchill’s discomfort with such segregation: Churchill wrote that nearly every race in Europe had been shipped to concentration camps and “there appears to be very little difference in the amount of torture they endured.” (page 120). Jews who wanted to stay in their home lands or who successfully negotiated the resettlement of European Jews anywhere but Israel were denounced and thwarted.

How did the Zionists succeed in insisting that they spoke for all Jews when it is clear that they did not? What gave them the right, as murderers of Jewish refugees, to speak for displaced Jews after the war?

Zionists consistently claimed to speak for all Jews. No wonder the Zionists insisted on the use of Hebrew (a number of early German and Yiddish language newspapers were bombed). Suarez points out that the settlers spoke the language of the biblical era because they claimed to be its people (page 25). Ben Gurion claimed that the “Bible is our mandate.”

Israeli’s official birth in 1948 purged a million Palestinians and destroyed 400 of their villages. The UN had established Israel’s borders, but Israel already stretched beyond the borders and claimed sovereignty over all the land it held. Both England and the United States knew that Israel would not give back any land. Reuven Shiloah, the first director of the Mossad, not only told them so but declared Israel’s right to take more land as necessary (page 277).

Israel’s theft of Palestinian land and assets was not simply a result of claiming land Israel was granted by the UN. Suarez makes the point that: “economic analysis…illustrates that the Israeli state owes its very existence to its wholesale theft of Palestinians’ worldly possessions…Despite the massive infusion of foreign capital into Israel and its claims of modern efficiency, it was the end of the Palestinians’ [assets] that saved the Israeli state from stillbirth” (page 288).

Israel’s treatment of its Palestinian benefactors after 1948 was atrocious. It is painful to read through Suarez’s partial listing of atrocities: rape, torture, murder and robbery. Arab villages, Christian and Muslim, friendly and not, were destroyed. In one instance, Arab villagers were murdered by being forced to stay in their homes as they were bombed. (page 309).

At the time, Israel itself was the site of “alarming proportions” of murder, rape and robbery within its own citizenship. One Israeli speculated that this arose from a “general and contemptuous disregard for law” (page 298). A British report stated: “intolerance explodes into violence with appalling ease in Israel.”

Israel reached into Iraq (with false flag operations against Iraqi Jews to prompt immigration) and into North Africa to obtain citizens for its new settler state. The Iraqi and North African Jews were kept in miserable conditions until they were deployed as place holders to live on newly acquired land.

In 1954 Israelis planted bombs in Egypt in a false flag operation intended to convey that Egypt was unstable. When the plan was exposed in 1955, the United States and the United Kingdom considered military action against Israel to stop its murderous seizure of land. In a cold war series of events detailed by Suarez, France and England ended up siding with Israel against Egypt in the Suez Crisis, ending any chance that England and the United States would conduct any action against Israel.

So far in his book Suarez has delivered a careful, albeit painful, history. And then Suarez delivers his indictment, “with the conclusion of Suez,…Israel had fully established its techniques of expansion and racial cleansing that continue to serve it today: its maintenance of an existential threat, both as a natural consequence of its aggression and of provocation for the purpose; its expropriation and squandering of the moral weight of historic anti-Semitism and the Holocaust; its dehumanization of the Palestinians; its presence as the prophet-state of the Jews; and its seduction of its Jewish population with the perks of blood privilege.”