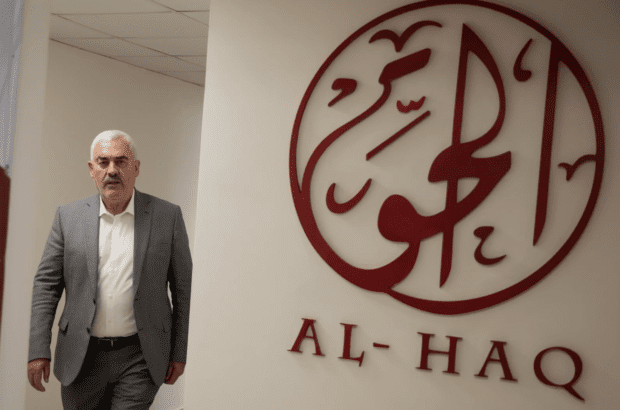 Shawan Jabarin, director of the al-Haq (The Truth), one of the Palestinian human rights groups that Israel designated – without offering evidence – as terrorist organizations (Ramallah, October 30)

Israel is silencing Palestinian human rights groups that expose the cruelty of Israel’s occupation – as usual, with no proof, and with an eye to ending the international funding that helps the Palestinian people survive.

Did someone forget to tell Benny Gantz that Donald Trump is no longer the United States president? [NOTE: Trump consistently did the bidding of Israel-firster Sheldon Adelson and the Israel lobby.]

It certainly looked that way last Friday as Israel’s defence minister – who has been presented as a force for moderation in an Israeli government led by the settler right – declared six leading Palestinian human rights groups to be “terrorist organisations”.

The move effectively outlaws the most prominent organisations in the Palestinian human rights community.

Despite the eternal bonds so often lauded by Israeli and US officials, President Joe Biden’s administration appeared to be caught off-guard by the announcement, despite claims from Israel that Washington had been forewarned.

Israeli officials were reported on Sunday to be preparing to fly to the US to share intelligence justifying the new “terror list”.

The targeted groups – most funded by European states – include those assisting farmers and promoting women’s rights and democratic values, as well as others documenting Israeli violations of the rights of prisoners and children, and exposing war crimes.

Israel offered no evidence that any of the Palestinian lawyers, field researchers, community organisers, and press officers that staff these organisations are carrying weapons or making bombs.

Shawan Jabareen, director of al-Haq, one of the organisations listed, noted the obvious paradox: “Gantz says we are a terror organisation, when he himself is a war criminal”.

Al-Haq has been at the forefront of efforts by the Palestinian human rights community to supply evidence to the International Criminal Court (ICC) at The Hague that Israeli military commanders and politicians have been responsible for war crimes against Palestinians.

Gantz, for example, was head of the Israeli military back in 2014 when it laid waste to parts of Gaza, killing at least 1,450 civilians, including some 550 children. He later boasted that he had sent Gaza “back to the Stone Age”.

So how exactly does Israel think most of the Palestinian human rights community qualifies as “terrorists”?

The indications so far are that Israel plans to construct a murky narrative for western capitals based on supposedly secret evidence tying the organisations financially to the Popular Front for the Liberation of Palestine (PFLP).

It has spoken vaguely of the human rights groups being “controlled by senior [PFLP] leaders” and acting as a “central source” of money for the PFLP by redirecting “large sums of money from European countries and international organisations”.

There is a twofold advantage for Israel in presenting its claim this way.

The first is that almost certainly the intelligence – given its classified nature – will be all but impossible for the organisations to refute. The US and Europeans will largely have to take Israel’s word for it.

We have been here many times before. Israel makes extravagant claims about links to terror groups no one is in a position to check. If an investigation does eventually take place, by the time the truth emerges everyone has moved on and the false impression is rarely corrected.

This is what happened when Israel bombed a tower block in Gaza back in May that had been serving as a base for many media organisations. Israel claimed it also housed Palestinian militants, though it never produced any evidence to support such an improbable claim.

It was also Israel’s approach after soldiers shot dead Ahmad Erekat in his car in June 2020 at a West Bank checkpoint as he was doing errands for his sister’s wedding. Israel said it was a terrorist car-ramming. A reconstruction by experts, however, indicated that Erekat’s brakes had malfunctioned.

The case of Mohammed el-Halabi is even more pertinent. A charity worker in Gaza, he has spent five years in an Israeli prison without trial, accused of diverting huge sums of international aid money to Hamas. Israel’s claims against Halabi have proved so obviously unsupportable that even the western media has started to doubt them.

Secondly, Israel will hope that the central thrust of its allegations will be treated uncritically: that any connection by anyone in these groups to the PFLP can be cited as definitive proof of the organisation’s ties to terrorism. It is doubtless true that some staff in these human rights groups have an ideological affiliation with the PFLP – and for good reason.

Most Palestinian political leaders have either been co-opted by Israel, as with Fatah, which is invested in a “sacred” security cooperation with Israel’s occupation forces, or they have prioritised a struggle that, through its Islamist character, fails to represent large sections of the Palestinian population, as with Hamas and Islamic Jihad.

The only significant political alternative is provided by the PFLP. Its vision is of a secular, single democratic state offering all inhabitants of the region, Jews and Palestinians, equal rights. That platform is growing politically more powerful, for Palestinians and solidarity activists, as Israel makes it even clearer that it has no interest in ever allowing partition of the land and the establishment of a Palestinian state.

But, as with most national liberation movements, there have been historic divisions within the PFLP about how best to achieve its goal of decolonisation and a single democratic state.

As in Fatah and Hamas, some believe liberation will require armed resistance, which is allowed under international law against a belligerent occupier like Israel, while others are committed to political struggle.

Israel, of course, is keen to blur these distinctions and avoid any examination of the PFLP’s central political aspiration: a state based on equal rights rather than absolute rule by one ethnic group exported by Israel into the Palestinian territories through military occupation.

Instead, Israel has issued a blanket proscription on the PFLP, hounding all its prominent members. That has included Khalida Jarrar, a PFLP legislator, who was recently released by Israel after two years’ imprisonment. Jarrar worked on Palestine’s application to the ICC. According to Human Rights Watch (HRW), Israel “never claimed that she had any personal involvement in armed activities”.

There should be no doubt that these six Palestinian human rights organisations have prioritised organised, communal resistance to Israel’s occupation rather than armed struggle.

Some, like the Union of Agricultural Work Committees and the Union of Palestinian Women’s Committees, are there to internally strengthen Palestinian society. They hope to make Palestinian communities better able to withstand Israel’s relentless efforts to drive Palestinians off their land to be replaced by illegal Jewish settlements – a process Israel ominously calls “Judaisation”.

These agricultural and work committees encourage a long-standing Palestinian principle known in Arabic as sumud, or steadfastness. But given Israel’s desire to ethnically cleanse Palestinians and destroy any hope of a future Palestinian state, steadfastness is easily equated in the Israeli imagination with terrorism.

The other groups on the list, such as al-Haq, Addameer, and Defence for Children International, have been highly effective at documenting Israel’s war crimes against Palestinians, from killing civilians and abusing Palestinian children and prisoners to forcible transfer policies and settlement building.

The data collected by Palestinian groups is shared with international and Israeli human rights organisations such as HRW and B’Tselem, both of which recently issued reports declaring Israel an apartheid state.

Israel has been targeting these groups too.

Omar Shakir, the regional director of HRW, was expelled by Israel two years ago. Last year, Israel refused to renew work visas for United Nations human rights officials after they published an investigation into the collusion of international firms with illegal West Bank settlements.

And B’Tselem, Israel’s foremost occupation watchdog, and Breaking the Silence, a group of whistleblowing former Israeli soldiers, are denied the right to speak in Israeli schools and are regularly vilified by Israeli politicians and the media. This assault by Israel on the entire human rights community – at home and abroad – is obviously explained.

These organisations have been gradually making an unassailable case: both for Israeli leaders to be prosecuted at the ICC for war crimes, and for boycotts and sanctions to be imposed on Israel of the kind that was used against apartheid South Africa.

That work is polarising Jewish communities abroad, traditionally a reliable support base for Israel. And it is making an overpowering case for Israel to be shunned, exposing the yawning gulf between the expectations of western publics and the inaction of their leaders.

For Israel, all this is truly terrifying – and therefore those responsible for it must be deemed terrorists.

Gantz’s suggestion that Israel has new information tying these Palestinian human rights groups to terror is belied by the fact that Israel has been abusing them for many years.

Staff have been arrested and jailed or denied the right to travel abroad. Jerusalem residency permits for their workers have been revoked. And the army has raided their offices, seizing computers and documents. Those abuses have intensified as these organisations have found more purchase at international forums for their research into Israeli war crimes and apartheid practices.

Israel will now be able to exploit its new “terror list” to justify intensifying the crackdown. It will be even easier to find pretexts for harassing and jailing staff.

But there are other advantages for Israel. It will make it even harder for international and Israeli partners to collaborate with Palestinian groups on work exposing the crimes of Israeli occupation.

And undoubtedly Israel and its advocates abroad will use the terror designation to further vilify these groups and discredit their findings.

But perhaps the biggest prize for Israel will be using this new “terror list” to try to bully European states and the European Union into ending their funding for the Palestinian human rights community.

Israel will bundle all this supposed “hate” into its existing narrative that it is facing a campaign from all sides to “demonise” the only Jewish state in the world.

The reality is that Israeli leaders are conflating their own terror at being held to account for their crimes with an imagined “terrorism” being waged by lawyers and researchers trying to show the reality of occupation.

Will anyone fall for it? The record suggests western governments just might.

Please go here to contact your Congress member and demand that they support human rights.

Jonathan Cook is the the author of three books on the Israeli-Palestinian conflict, and a winner of the Martha Gellhorn Special Prize for Journalism. His website and blog can be found at: www.jonathan-cook.net