You Are Here: Home → Netanyahu & Israel lobby lead Trump to war with Iran on behalf of Israel 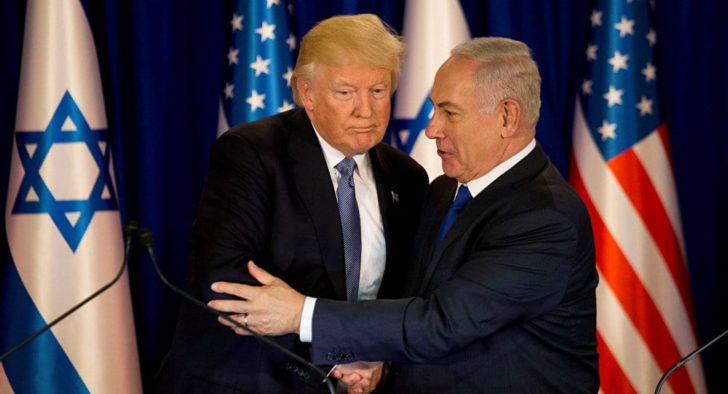 In December 2016, Netanyahu claimed there were “at least five” ways of undoing the Iran nuclear deal, and he intended to discuss them with President Trump.

Can Generals James Mattis (US Secretary of Defense) and John Hyten (Head of US Strategic Command) Prevent a Disaster?

Israeli Prime Minister Benjamin Netanyahu and the Presidents of the 52 Major Jewish American Organizations are leading President Trump, like a puppy on a leash, into a major war with Iran. The hysterical ’52 Presidents’ and ‘Bibi’ Netanyahu are busy manufacturing Holocaust-level predictions that a non-nuclear Iran is preparing to ‘vaporize’ Israel, the most powerful, nuclear-armed state in the Middle East.  The buffoonish US President Trump has swallowed this fantasy wholesale and is pushing our nation toward war for the sake of Israel and its US-based supporters and agents.  We will cite ten recent examples of Israeli-authored policies, implemented by Trump in his march to war (there are scores of others).

President Trump’s irresponsible pandering to Israel and its American-Jewish agents has caused deep unease among the Generals in his cabinet, as well as among active duty and retired US military officers, who are skeptical about Tel Aviv’s push for open-ended US wars in the Middle East.

The Netanyahu-Israel First power configuration in Washington succeeded in convincing Trump to tear-up the nuclear accord with Iran.  This went against the advice and wishes of the top US generals in the White House and active duty officers in the field who support the agreement and recognize Iran’s cooperation.

The Generals have ten solid reasons for rejecting the Netanyahu-Trump push to shred the accord:

Trump’s decision not to certify Iran’s compliance with the accord and his handing the ultimate decision on an international agreement signed by the six members of the UN Security Council over to the US Congress is ominous:  He has effectively given potential war making powers to a corrupt legislature, often derided as ‘Israeli occupied territory’, which has always sided with Israeli and US Zionist war mongers.  Trump is snubbing ‘his’ State Department, the Pentagon and the various US Intelligence agencies while giving into the demands of such Zionist zealots as New York Senator Charles Schumer, Netanyahu’s alter ego in the US Senate and a huge booster for war with Iran.

Trump’s refusal to certify Iran’s compliance with nuclear accord reflects the overwhelming power of Israel within the US Presidency.  Trump’s rebuke of his generals and Secretary of State Tillerson, the UN Security Council and the 5 major cosigners of the 2015 accord with Iran, exposes the advanced degradation of the US Presidency and the US role in global politics.

All previous US Presidents have been influenced by the billionaire and millionaire diehard Israel-Firsters, who funded their electoral campaigns.  But occasionally, some ‘Commanders in Chief’ have decided to pursue policies favoring US national interest over Israel’s bellicose ambitions.  Avoiding a catastrophic war in the Middle East is such a case:  Obama chose to negotiate and sign a nuclear accord with Iran.  Tel Aviv’s useful fool, Donald Trump, intends to break the agreement and drag this nation further into the hell of regional war.

In this regard, international opinion has sided with America’s generals.  Only Israel and its US acolytes on Wall Street and Hollywood applaud the blustering, bellicose Trump!

James Petras is the author of more than 62 books published in 29 languages, and over 600 articles in professional journals, including the American Sociological Review, British Journal of Sociology, Social Research, and Journal of Peasant Studies. He has published over 2000 articles in nonprofessional journals such as the New York Times, the Guardian, the Nation, Christian Science Monitor, Foreign Policy, New Left Review, Partisan Review, TempsModerne, Le Monde Diplomatique, and his commentary is widely carried on the internet.

His publishers have included Random House, John Wiley, Westview, Routledge, Macmillan, Verso, Zed Books and Pluto Books. He is winner of the Career of Distinguished Service Award from the American Sociological Association’s Marxist Sociology Section, the Robert Kenny Award for Best Book, 2002, and the Best Dissertation, Western Political Science Association in 1968. His most recent titles include Unmasking Globalization: Imperialism of the Twenty-First Century (2001); co-author The Dynamics of Social Change in Latin America (2000), System in Crisis (2003), co-author Social Movements and State Power (2003), co-author Empire With Imperialism (2005), co-author)Multinationals on Trial (2006).

Petras has a long history of commitment to social justice, working in particular with the Brazilian Landless Workers Movement for 11 years. In 1973-76 he was a member of the Bertrand Russell Tribunal on Repression in Latin America. He writes a monthly column for the Mexican newspaper, La Jornada, and previously, for the Spanish daily, El Mundo. He received his B.A. from Boston University and Ph.D. from the University of California at Berkeley.