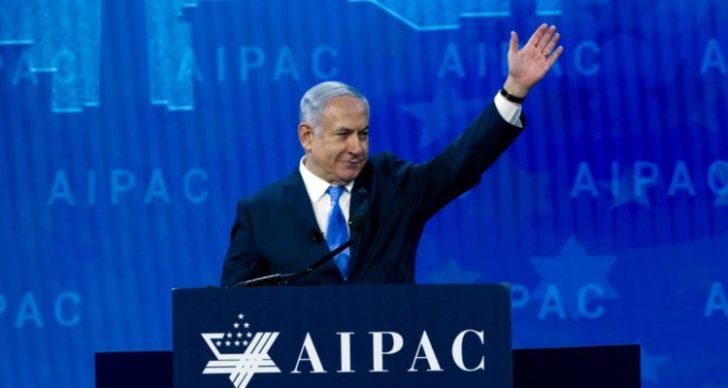 One of the best-known American lobbying groups for strong bipartisan support for Israel jumped into campaign financing for the first time last December, but one of its two new political action committees (PACs) doesn’t mention Israel, the Jewish Telegraphic Agency (JTA) reported.

AIPAC, the American Israel Public Affairs Committee, has for seven decades been a lobbying group whose mission is to “encourage and persuade the U.S. government to enact specific policies that create a strong, enduring and mutually beneficial relationship with our ally Israel.”

This includes promoting Israel’s security with military aid and joint missile defense development as well as “strategic cooperation” in areas such as technology, agriculture, energy and intelligence sharing.

[This has succeeded in funneling billions of Americans’ tax dollars to israel, most recently this.]

With a membership of well over a million citizens, its powerful advocacy efforts on both sides of the political aisle have been credited with keeping bipartisan support for the Jewish state strong on almost every issue affecting the Middle East.

Four months ago, the organization added a new element to its work due to the “profound change” in Washington’s political environment, as AIPAC president Betsy Berns Korn explained in her introduction of two money-funneling tools.

“Hyperpartisanship, high congressional turnover and the exponential growth in the cost of campaigns now dominate the landscape,” she said.

AIPAC, as its mission statement says, “supports pro-Israel Democratic and Republican members of Congress and congressional candidates to secure the future of the U.S.-Israel relationship.” American law allows such a PAC to donate up to $5,000 to a candidate or their campaign committee per election.

Its new PAC (public affairs committee), however, says nothing about the Jewish state in its official mission statement. Named the United Democracy Project, its webpage says that its goal is “to elect candidates that share our vision of Americans coming together to support our mutual interests and belief in democracy.”

Curiously, according to the JTA report, neither does it state that its main backer is AIPAC, although the report said that out of the almost-$10 million the PAC has already raised, $8.5 million comes from AIPAC, as per data from the Federal Election Committee.

In contrast to its sister-committee, the Project is a ‘super PAC,’ meaning that it can spend any amount of money to help or hinder a candidate or issue as long as it is not directly synchronizing its efforts with a specific campaign.

The JTA noted that in an advertisement in The Hill for a political director, the United Democracy Project did say it would be concentrating on the Israel-U.S. relationship. Its CEO, Rob Bassin, is also an obvious link, as he served as AIPAC’s political director for the last 22 years before switching positions.

AIPAC spokesman Marshall Wittmann did not respond to an email asking why the word “Israel” is missing from the mission statement, said the JTA report, stating only, “The creation of a PAC and a super PAC is an opportunity to significantly deepen and strengthen the involvement of the pro-Israel community in politics.”

The premier Israel-advocacy organization has recently come under fire from both sides of the political map.

The Left bashed its federal PAC for endorsing 37 Republicans who refused to affirm Joe Biden’s presidency, backing former president Donald Trump’s claim that the 2020 elections had been “stolen.”

Meanwhile, the Right protested the PAC’s support of 27 Democratic lawmakers who had voted for the Obama-era Iran nuclear deal in 2015, despite pledging to “excommunicate” any legislators who did so because of the profound danger it posed to Israel.