You Are Here: Home → Billions more of Americans’ tax money to go to Israel

Billions more of Americans’ tax money to go to Israel 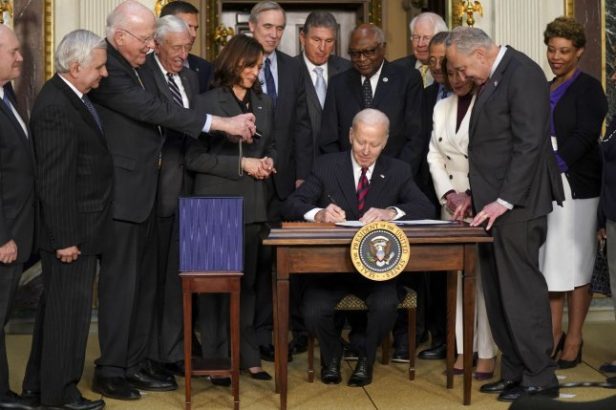 Biden signs 2022 spending bill as Senator Schumer, VP Harris, and others look on.

Almost $5 billion goes directly to Israel, and another $3 billion (at least) goes to projects because they benefit Israel. This works out to approximately $22 million per day of Americans’ tax money expended for a small, rich foreign country that regularly brutalizes an entire population and causes damage to the US…

President Biden just signed legislation that will give Israel an additional billion dollars of American’s tax money this year, on top of the approximately $4 billion Israel was already slated to get from Americans who never have any say about it, since the media virtually never tell them about how much of their money is being given to a small, rich foreign country.

The funding is included in the omnibus spending bill to fund the federal government through September (the end of the 2022 fiscal year).

And the ~$4 billion is only the most obvious funding to Israel – which has already received more U.S. tax money than any other country. On top of that are hundreds of millions more of our tax dollars expended on behalf of Israel scattered throughout the massive 2,741-page spending bill.

The total amount of money going directly to Israel, combined with the money expended on items because they benefit Israel and/or are caused by our support of Israel, is difficult to decipher, but is at least $8 billion, which comes to approximately $22 million per day. (It may be considerably more.)

Yet, virtually none of this is reported in mainstream news stories about the spending bill.

Israeli and Jewish media, however, pleased at U.S. politicians’ generosity with our tax money, covered it widely, and  the powerful lobby group American Israel Public Affairs Committee (which likely wrote much of the Israel-related sections) issued a jubilant statement: “AIPAC applauds the U.S. Congress for providing historic funding for Israel’s security and other key provisions in the omnibus funding bill for Fiscal Year 2022.”

It listed a number of the additional “important provisions” for Israel on top of the baseline $4.8 billion:

While Senator Rand Paul held up the additional funding for awhile, there was little doubt, given the influence of the Israel lobby in both parties, that it would eventually go through.

And, as the Times of Israel (TOI) reports, House Majority leader Chuck Schumer from New York helped to ensure passage by bringing in Senate Minority Leader Mitch McConnell “to help shape the bill in hopes of getting bipartisan support.”

Like Schumer, Pelosi often brags about her service to Israel, as pro-Israel billionaires fund both parties.

AIPAC also thanked the many other Congress members who did its will:

The politicians seem unconcerned that Israel consistently causes profound harm to the U.S. (see this and this), and the media rarely, if ever, mention it.

Also in the bill: $500 million for Jewish security

TOI reports that also included in the legislation is  “substantially increased funding for nonprofit security, a key request by major Jewish groups over the last year” – up from $180 million to $250 million.  TOI states that the Orthodox Union, the Jewish Federations of North America, and Agudath Israel of America “are all longtime backers of the program.” (All these groups advocate for Israel, as do the groups receiving the funding.)

The Jewish Federations of North America, representing hundreds of groups, took credit for the increase in funding, stating it was “the culmination of months long advocacy efforts that we led.”

“At least two proposed laws are seeking further increases: Reps. Benny Thompson, a Democrat from Mississippi and the chairman of the Homeland Security Committee, along with John Katko, a Republican from New York, last week got the committee to approve a bill that would increase funding for the security grants portion of the security increase to $500 million.”

In the Senate, Ted Cruz (R-TX) says he plans to introduce a bill to increase the funding to $540 million.

While the security grants also go to other religious groups, there is a reason that Jewish institutions were responsible for the legislation: most of the money goes to synagogues, schools, and lavish Jewish community centers around the country – despite the fact that only 2.4 per cent of the population is Jewish, reportedly the wealthiest religious group in the country.

Most of these institutions fly the Israeli flag, and virtually all sponsor pro-Israel programs.

Chabad institutions in Montgomery County, Maryland, will receive over $100,000 of security grants. Chabad features the teachings of The Rebbe, who called for providing arms to Israel and enunciated some supremacist views.

The Times of Israel reports some additional funding: “Other funding backed by Jewish groups in the omnibus includes $6 million for assisting elderly Holocaust survivors.”

It is unclear whether non-Jewish survivors of the Holocaust will be included; nor whether survivors of Stalin’s massacres, survivors of slavery, Nakba survivors, or native Americans, Armenians, or survivors of history’s other holocausts will receive any of the money.