You Are Here: Home → Mike Pence and the (alarming) company he keeps

Mike Pence and the (alarming) company he keeps 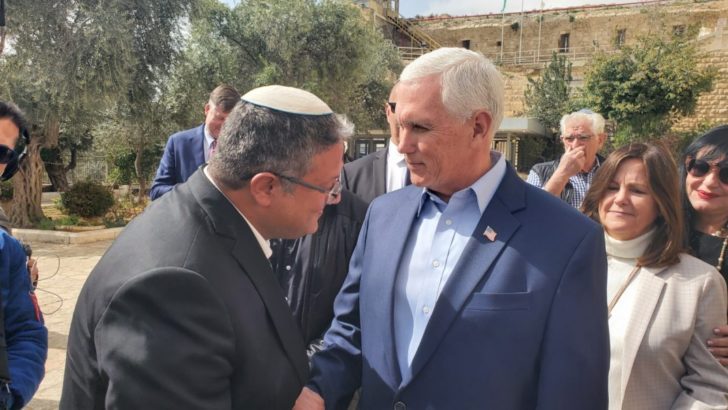 Former VP Mike Pence recently visited Israel, where he spent time with Israeli extremists associated with a banned terrorist movement and meeting with mega-donor and Israel hawk Miriam Adelson, who is willing to pay big bucks for policymakers’ loyalty.

Former Vice President Mike Pence is an outspoken evangelical Christian, unafraid of voicing opinions that make progressives uncomfortable. But lately, he has entered territory that would make a lesser man blush: spending time with people scorned by even Israel’s most uncritical supporters.

As an evangelical and Christian Zionist, Pence has pledged to support Israel as the modern embodiment of the ancient biblical kingdom. His conviction – that Jews have a divine right to the land currently under Israeli control, including the occupied Palestinian territories – gives him common ground with Israel’s right wing. Perhaps he’s unaware that many Christians, including many evangelicals and top theologians, don’t share his interpretation of scripture.

In his visit to Israel last week, Mike Pence stopped off in the flashpoint city of Hebron (called Khalil by Palestinians), located in the occupied West Bank. Hebron the traditional birthplace of Abraham and the site of several shrines revered by Muslims, Jews, and Christians.

Pence took a consciously Israel-centric view of Hebron, visiting with Israeli Jewish leaders, touring Jewish areas of the Tomb of the Patriarchs, and commenting on the Jewish connection to the city – although Hebron is a Palestinian city in occupied Palestine.

Extremist Jewish settlers dominate the city, although they are a small minority of the population (800-1,000 extremist Jews – supported by thousands of Israeli soldiers – vs. more than 200,000 Palestinians). Jewish dominance has forced Palestinians to live as virtual prisoners in their homes.

In violation of international law, Israel has facilitated the Jewish takeover of a large portion of the Ibrahimi Mosque, and at times banning Muslim worship. The site, also known as the Tomb of the Patriarchs, is revered by Muslims, Jews, and Christians.

Ben-Gvir and Marzel are disciples of the late Rabbi Meir Kahane, whose politics were so openly racist and violent that his political party, Kach, was deemed by both the US and Israel a terrorist organization and banned from Israeli politics. Kahane pushed for a Jewish theocracy in which non-Jews would be “obliged to assume duties, taxes, and slavery [or] be forcibly deported.”

After Kahane was assassinated by a Jewish extremist, Ben-Gvir and Marzel continued to lead his party, often employing anti-Palestinian violence. In Hebron, they have focused for years on cleansing portions of the city of Palestinians.

These two men are considered toxic even by the standards of the pro-Israel right. AIPAC, the American Israel Public Affairs Committee, called Ben-Gvir’s political party, Otzma Yehudit – of which Marzel is a member – “racist and reprehensible”; the Anti Defamation League (ADL) said “No American public figure should be associated with these types of extremists.”

For years, Itamar Ben-Gvir’s radical politics made him a political outcast in Israel. As Israeli tastes have grown more and more conservative, though, his popularity has increased. Last November he spoke to an enthusiastic group of 2,000, where he was introduced as “the man and the legend, fighting for democracy.”

What happened at the 2 November event in that plaza seems almost like the political crystallization of a “Jewish supremacy” movement. It is about preserving the exclusivity of having Jewish ethnic identity at the helm of government, with Jewish privilege portrayed as the supreme goal, the common denominator for the entire rightist camp.

This approach has, of course, been there in Zionism and the state of Israel from the outset. Now, however, it has been openly declared and explicitly celebrated, a banner uniting all parts of the right-wing – Likud, ultra-Orthodox, the rightist settler movement.

Until recently, Ben-Gvir was known to display in his home a photo of Israeli mass murderer and fellow Kahanist Baruch Goldstein, who in 1994 gunned down 29 Palestinians as they prayed in the Ibrahimi Mosque. Goldstein had moved to Israel from Brooklyn, New York.

Baruch Marzel served as Rabbi Meir Kahane’s chief of staff and as a spokesman for his Kach party. After Kahane’s death, Marzel led the party.

A settler in Hebron, Marzel is known for referring to a 1990s murder of two Palestinians by Israeli settlers as “holy work,” and for throwing parties in remembrance of Baruch Goldstein’s massacre of 29 Muslim Palestinians.

Marzel has a long criminal record that includes attacks on Palestinians and human rights defenders.

Ben-Gvir and Marzel are also remembered for participating in a rally protesting a visit from the Pope to Israel. He was to hold mass in the room believed to be the site of Jesus’ Last Supper. The site also holds significance for both Muslims and Jews.

During the rally, the two men were part of a group holding signs calling Christianity “accursed.” One of the group declared that “The Pope needs to come quietly…and see that Christianity has lost in its war against the Jews.”

In spite of this background, according to Israel National News, Pence said it was a “great honor” to meet Ben-Gvir, and told him, “Stay strong, and we’ll stand with you.” Apparently Pence did not recognize Baruch Marzel.

The group then had a photo op in front of the Tomb of the Patriarchs.

Although Pence’s time in Hebron was “all about heritage and the Bible and not about politics,” his visit to Israel was primarily political.

His itinerary also included a meeting with Miriam Adelson, billionaire widow of Sheldon Adelson, the Republican mega-donor who reportedly donated close to $500 million to the GOP during his lifetime. (Sheldon once said, “I am not Israeli. The uniform that I wore in the military, unfortunately, was not an Israeli uniform. It was an American uniform.”) The meeting led some to speculate that Pence is planning a presidential run in 2024.

Israel appears to be a mandatory destination for presidential hopefuls. In 2021-2022, Mike Pompeo, Ted Cruz, Nikki Haley, and Lindsey Graham have already made the pilgrimage.

Money meets politics – and no one seems to notice

Miriam and Sheldon Adelson used their financial clout during the Trump administration to promote a number of high profile US actions in Israel, including the US Embassy move from Tel Aviv to Jerusalem, recognition of the occupied Golan Heights as part of Israel, and the US departure from the Iran nuclear deal.

Responsible Statecraft noted regarding Pence’s Israel trip that, while it is widely known that he flew on Miriam Adelson’s jet and met with her, and that she is wildly wealthy and willing to invest in political campaigns – there’s an elephant in the room:

If one listens to Miriam Adelson, it’s clear what motivates her outsized political giving: pursuit of a hawkish US foreign policy in lockstep with Israel’s far-right…But news coverage of the Republican Party’s biggest donor is superficial at best, and negligent journalism at worst.

Americans are left to speculate on what both Pence and Adelson want from each other, and what they are willing to offer.

It’s not hard to guess.

RELATED READING ON EVANGELICALS AND ISRAEL:

RELATED READING ON THE ADELSON CONNECTION: