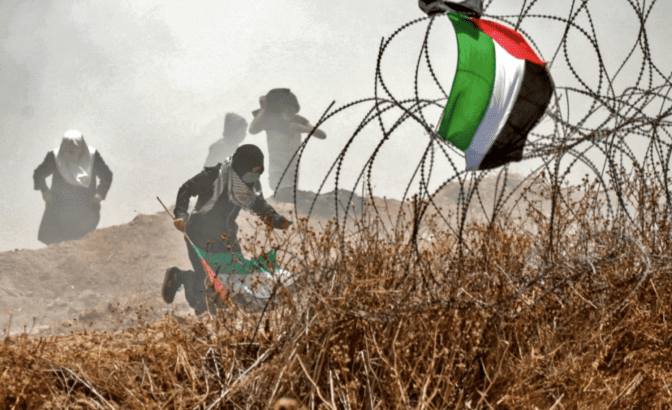 A Palestinian protester runs past barbed wire near the Gaza fence on 14 May 2018 – a snapshot of Israel’s system of apartheid, as referenced by the UN Special Rapporteur in his latest report.

Israel is planning a campaign to discredit the UN commission investigating Israel’s May attacks on Gaza and the root causes of the conflict in the occupied West Bank and Gaza… Israeli officials are concerned that the commission’s report will refer to Israel as an “Apartheid state” and that its findings could damage Israel’s reputation, particularly among progressives in the West…

The Special Rapporteur on human rights in the Occupied Palestinian Territories(OPT), Michael Lynk, has submitted a report to the Human Rights Council, concluding that the situation in the OPT amounts to apartheid.

“The Special Rapporteur’s findings are an important and timely addition to the growing international consensus that Israeli authorities are committing apartheid against the Palestinian people.

The report details how Israel has established a system of racially motivated oppression against Palestinians, explicitly designed to maintain Jewish Israeli domination, and maintained through the commission of grave human rights violations.

“Palestinian human rights organizations have been calling the situation apartheid for years, and this report is a landmark moment of recognition of the lived reality of millions of Palestinians.

Like Amnesty International and many other human rights groups, the Special Rapporteur examined Israel’s treatment of Palestinians through the lens of international law and reached the unmistakeable conclusion that this is apartheid.

“In recent months Israel has intensified its efforts to censor and discredit anyone who uses the word apartheid. Instead of engaging with serious allegations made by human rights organizations and now the UN, Israeli authorities continue to limit their response to attacking the messenger with groundless accusations of bias.

This failing strategy cannot hide the growing consensus among experts that the harsh reality of the grinding oppression to which Israel subjects Palestinians on a daily basis is a textbook example of apartheid.

“The report emphasizes the need for the international community to accept the findings of human rights organizations, including Amnesty, and start calling Israel’s apartheid what it is.

The international community, in particular countries allied to Israel, must stop making excuses for this cruel system of racial domination and oppression and take immediate action to help end apartheid and protect Palestinian rights. ”

Amnesty International’s February 2022 report sets out how Israel is enforcing a system of apartheid against Palestinians wherever it has control of their rights, including within Israel. Amnesty is calling on the International Criminal Court (ICC) to consider the crime of apartheid in its current investigation in the OPT, and for all states to exercise universal jurisdiction to investigate and prosecute persons suspected of the crime against humanity of apartheid.

The report of the Special Rapporteur examines the current human rights situation in the OPT, with particular focus on the question of apartheid. It finds that Israeli Jews and Palestinians in Occupied Palestinian Territories live “under a single regime which differentiates its distribution of rights and benefits on the basis of national and ethnic identity, and which ensures the supremacy of one group over, and to the detriment of, the other.”

It sets out how this system “endows one racial-national-ethnic group with substantial rights, benefits and privileges while intentionally subjecting another group to live behind walls, checkpoints and under a permanent military rule”, and concludes that this “satisfies the prevailing evidentiary standard for the existence of apartheid”.

In January, a leaked cable [see below] from the Israeli Foreign Ministry described a planned campaign to discredit the Special Rapporteur’s work, and Israeli authorities have prevented UN human rights staff and investigators from entering Israel and/or the OPT. This is part of a wide-ranging attack on human rights which has also seen Palestinian organizations outlawed, harassed and silenced.

Israel is planning a campaign to discredit a UN commission formed to investigate the violence in Gaza last May and the root causes of the protracted conflict in the occupied West Bank and Gaza, according to an Israeli Foreign Ministry cable seen by Axios.

Why it matters: Israeli officials say they are highly concerned that the commission’s report will refer to Israel as an “Apartheid state” and that its findings could damage Israel’s reputation, particularly among progressives in the West. The report is expected in June.

The backstory: The UN Human Rights Council in Geneva voted narrowly last May to form the Commission of Inquiry. The Western democracies on the committee objected to the fact that the commission’s mandate was unusually broad when it came to investigating Israel, and didn’t specifically mention investigating Hamas.

Behind the scenes: Last week, the international organizations department of Israel’s Foreign Ministry sent a classified cable to all Israeli diplomatic missions around the world. It designated the commission of inquiry as its “top priority” at the UN in 2022.

The other side: A spokesperson for the commission of inquiry declined to comment directly on Israel’s criticism but said the commission was comprised of three independent and impartial experts who are not paid for their work and will investigate allegations of international law violations by all parties — state or non-state — without distinction.