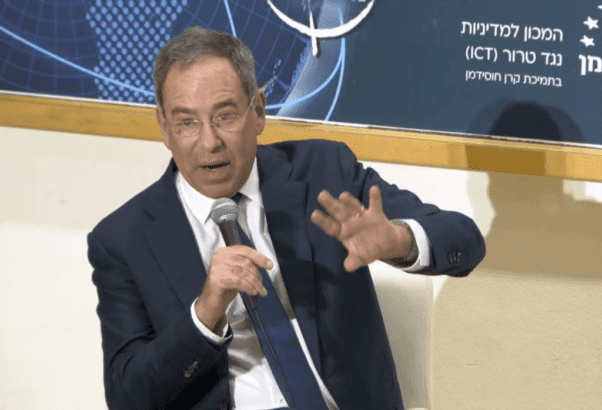 US AMBASSADOR TO ISRAEL TOM NIDES, SPEAKING TO THE INTERNATIONAL INSTITUTE FOR COUNTER-TERRORISM IN ISRAEL ON SEPT. 11, 2022. SCREENSHOT (mondoweiss.net)

Nides did not mention the 49 Gazans, among them 17 children, killed by Israeli missile strikes in those “relatively calm” three days in August… Nides recently said: “I have done hundreds of events with the IDF and they are a phenomenal military.”]

(Nides is a lifelong Israel partisan who was a top executive at a firm that helped precipitate the 2007–08 financial crisis, received a $10 billion bailout from the government, then fought efforts to reform the financial sector…)

US ambassador to Israel Tom Nides yesterday praised Israel’s treatment of Gaza, saying that it had been able to “lean in” and make life better for Gazans, with the result that last month’s onslaught was “relatively calm.”

Nides did not mention the 49 Gazans, among them 17 children, killed by Israeli missile strikes in those “relatively calm” three days in August.

The ambassador spoke at an Israeli “summit on counter-terrorism” and echoed Israeli talking points: permits that Israel issued to impoverished Gazans in the last year to work inside Israel have neutralized Hamas.

I will tell you, interestingly enough, and not to use this as an example… decisions about how Israel has looked at Gaza, and what they have done to try to keep a not-a-great situation relatively calm was proven out five weeks ago. Again I’m not saying that will be the future indication– past performance not an indication of future performance– but it shows you when you lean in, when you lean in and you try to make things a little bit better– you can do that with the work permits and a variety of other things that they’re allowing to happen– ultimately when the rockets were flying, as we all know, Hamas did not engage principally in that activity…

Those rockets were fired by Palestinian Islamic Jihad. No Israelis died during that exchange. [See this]

Nides has made it a practice to overlook Palestinian deaths. He surely does so for the Democratic Party’s political interests back in the U.S., and also to help out Israeli PM Yair Lapid, and the right-center Israeli coalition that ended Netanyahu’s reign a year ago but is running against him again now.

Nides yesterday echoed the Israeli justification for killing 88 Palestinians in the West Bank this year: Israel is fighting terrorism. The same “characters” who brought down the World Trade Center in 2001 are trying to hurt Israel, Nides said:

Nides did not mention the killing of Palestinian-American journalist Shireen Abu Akleh in the occupied West Bank on May 11, which Israeli leaders have justified as a response to terrorism. In the four months since an Israeli soldier killed Abu Akleh, Nides has apparently mentioned her in public only once, the day she was killed, saying he was “very sad” to learn of her death and encouraging a “thorough” investigation of her death.

That investigation has never taken place, and the U.S. goes along with the Israelicoverup.

Nides explained yesterday that the US and Israel are bound by “soul,” “DNA,” and democracy:

It’s not just the leaders, it’s in our soul, it’s in our DNA in how we operate… Listen.. the bond between our countries… is I think people don’t understand, it’s sort of in our soul, it’s in the souls of Americans and in the soul of the professionals who wake up every day. Because we have an enormous amount in common. We’re both democracies who care deeply about democratic values. We’re not perfect…

Nides gently raised the Palestinian issue. Asked what the biggest threats to Israel are, Nides said Iran but “equally” Palestinian conditions in the West Bank.

I spend an inordinate amount of my time trying to keep the vision of the two state solution alive. Not because I want the Nobel Peace prize…. It is because I fundamentally believe to preserve Israel as a democratic Jewish state, we must have a two state solution. And I’m under no illusions here that that’s going to happen anytime soon.

But I have lots of conversations with Ronen [Bar, head of the Israeli internal security agency Shin Bet] and other people in the government about trying to help the conditions on the ground to make that possible which means trying to help the Palestinian people… to try to make things better, to keep a vision of that alive, and to try to get the parties not do do things that make it more difficult to try to achieve that goal… I think it’s important for us not to lose sight of the importance of what impact it could have on the state of Israel if the Palestinian situation gets dramatically worse in the West Bank and Gaza, and the smart people in this government understand that and we as the United States try to encourage it.

Nides said both political parties in the U.S. are fully behind Israel.

As President Biden constantly says it’s an unbreakable bond. I don’t care whether it’s a Democrat president or a Republican president or members of Congress who are Democrat or Republican, it’s an unbreakable bond, and it’s expressed principally in our cooperation for national security, security for the homeland of Israel and the homeland of the United States.

So because of that unbreakable bond in our souls, Nides takes Israel’s side when it kills a Palestinian journalist and 17 children.

Nides comes out of the Minnesota Jewish community and was a strong supporter of Israel in the Obama administration.

[Editor’s note – Nides recently said: “I have done hundreds of events with the IDF and they are a phenomenal military.”]