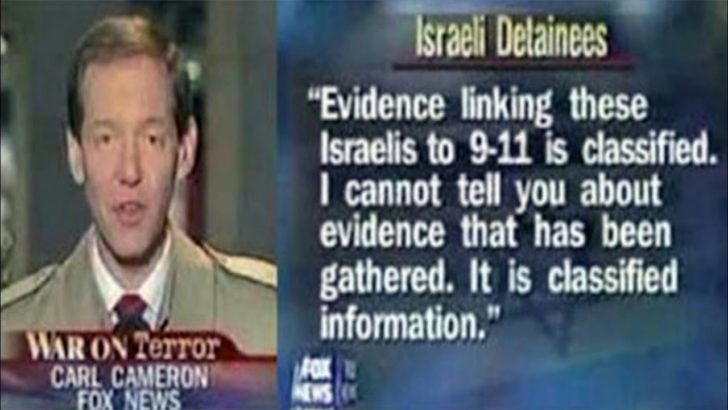 It is undoubtedly the largest case of Israeli spying in the United States – that has been made public – since 1986. In June 2001, an investigative report detailed the activities of more than one-hundred Israeli agents, some presenting themselves as fine arts students, others tied to Israeli high-tech companies. All were challenged by the authorities, were questioned, and a dozen of them are still imprisoned. One of their tasks was to track the Al-Qaida terrorists on American territory – without informing the federal authorities. Elements of this investigation, taken up by American television Fox News, reinforce this thesis: that Israel did not transmit to the United States all the evidence in its possession on the preparation of the September 11 attacks.

The latest issue of the Online Intelligence Letter, a publication specializing in questions of information, has revealed that a vast Israeli spy network operating on American territory was dismantled.

It is the biggest affair involving the Mossad (the Israel’s external security agency) in activity against the United States since Jonathan Pollard, an employee of the US Navy, was condemned to life in prison, in 1986, for spying for Israel’s benefit. Which was the real scale of this network? The facts evoked by an American investigative report do not indicate if the network obtained the information it was after, or if the authorities dismantled it in its initial phase.

According to the chief editor of Online Intelligence, Guillaume Dasquié, this “vast network of Israeli intelligence agents was neutralized by the counter-espionage services of the Department of Justice.” The Americans “would have apprehended or expelled close to 120 Israeli nationals.”

M. Dasquié gives a report on a “61-page review article” from June 2001, given to the American justice department by a “task force” made up of agents of the DEA (Drug Enforcement Administration) and some INS (Immigration and Naturalization Service) agents “who were associated with the FBI and the office of investigation of the US Air Force.” Questioned by Le Monde, Will Glaspy, of the Public Affairs department of the DEA, authenticated this report, and said the DEA “holds a copy.”

This is not the first time that information relating to Israeli espionage appeared in the United States since the Pollard affair. In June 1999, the review Insight had described, at length, a “secret” investigation by division 5 of the FBI regarding Israeli phone-tapping targeting the White House, the State Department and the National Security Council.

After the attacks of September 11, very little detailed information had come out about the arrest of some sixty Israelis. Finally, from the 11th to the 14th of December 2001, the Fox News television channel aired an investigation in four parts into Israeli espionage in the United States, in the broadcast “Carl Cameron Investigates.” [See video below] The Israeli embassy in Washington immediately responded by stating that it did not contain “anything true.” American Jewish organizations such JINSA (Jewish Institute for National Security Affairs), AIPAC (America-Israel Political Action Committee) and others, denounced the report as a “machination.” Fox withdrew from its Internet site, one day and half after its posting, all the material related to this investigation.

Le Monde requested three times with Fox News to provide a tape of the broadcast. It was never done. On February 26, Fox told our correspondent in New York that sending it posed “a problem,” without being specific. Le Monde, however took note of the whole script in this investigation. Carl Cameron evokes “a vast secret investigation held there” relating to “140 Israelis made to pass for students of the University of Jerusalem or Betzalel Academy of Arts [which have] unceasingly sought to come into contact with civil servants and, according to a document, targeted and penetrated military bases, dozens of buildings of the DEA, FBI, and others.”

His investigation focused on two aspects. Firstly, could the Israelis have had preliminary knowledge of the September 11 attacks and not informed the Americans? His sources, explains Carl Cameron, tell him: “The principal question is ‘how they could they have not known?’” On the screen, his editor-in-chief tells him thus: “Certain reports confirm that the Mossad sent representatives to the United States to warn them, before September 11, of the imminence of a major terrorist attack. That does not go in the direction of an absence of warning.” Cameron’s response: “The problem is not the absence of warning, but the absence of useful details” compared to those which American services suspect Israel of having held.

The second round of the investigation touched on Israeli companies providing administrative services for American companies, which would conceal information. It was aimed at the manufacturer of Amdocs software, placed on Wall Street, which lists, for the 25 major telephone companies of the United States, all the calls coming into and originating from American territory, as well as the companies Nice and Comverse Infosys, the latter providing the data-processing programs to American law enforcement agencies authorized to eavesdrop on private phone conversations. Comverse is suspected of having introduced into its systems of the “catch gates” in order to “intercept, record and store” these wire-taps. This hardware would render the “listener” himself “listened to.”

Question to Cameron: “Are there reasons to believe the Israeli government is implicated?” Answer: “No, none, but a classified top-secret investigation is underway.” The broadcast had been shown beforehand to the highest persons in charge of the CIA, the FBI, the NSA (the agency in charge of phone-taps), the DEA and the American Justice Department, none of which objected to its airing.

The report submitted to the American Justice Department, to which Le Monde had access, shows that many of the “fine-arts students” suspected of illicit activity have a military past in Israeli information or advanced technology units. Some entered and left the United States on several occasions, remaining each time for short periods. Several are related to the hi-tech Israeli companies of Amdocs, Nice and Retalix.

Challenged, a “coed” saw her guarantee of $10,000 paid by an Israeli working at Amdocs. Questioned, two others admitted being employed by Retalix.

Le Monde obtained other information not contained in this report. Six of the intercepted “students” had a cellular telephone bought by an Israeli ex-vice-consul in the United States. Two others, at an unspecified time, arrived in Miami by direct flight from Hamburg, and went to the residence of an FBI agent, to try to sell him artwork, left again for the Chicago airport to go to the residence of an agent of the justice department, then again took a plane directly for Toronto – all in one day.

More than a third of these “students,” who, according to the report, moved in at least 42 American cities, stated they resided in Florida. Five at least were intercepted in Hollywood, and two in Fort Lauderdale. Hollywood is a town of 25,000 inhabitants to the north of Miami, close to Fort Lauderdale. At least 10 of the 19 terrorists of 9/11 were residing in Florida.

Four of the five members of the group that diverted American Airlines flight number 11 – Mohammed Atta, Abdulaziz Al-Omari, Walid and Waïl Al-Shehri, as well as one of the five terrorists of United flight 175, Marwan Al-Shehhi – resided all at various times in… Hollywood, Florida. As for Ahmed Fayez, Ahmed and Hamza Al-Ghamdi and Mohand Al-Shehri, who took over United flight 75, like Saïd Al-Ghamdi, Ahmed Al-Haznawi and Ahmed Al-Nami, of United flight 93 which crashed September 11 in Pennsylvania, and Nawaq Al-Hamzi, of AA flight 77 (crashed into the Pentagon), they all at one time resided at Delray Beach, in the north of Fort Lauderdale.

This convergence is, inter alia, the origin of the American conviction that one of the tasks of the Israeli “students” would have been to track the Al-Qaida terrorists on their territory, without informing the federal authorities of the existence of the plot.

Two enigmas remain. Why was the Israeli network a priority of drug enforcement agents? An assumption: the DEA is the main American agency inquiring into the money laundering. A network such as Al-Qaida used “dirty” [funding], and the Taliban’s Afghanistan was the primary exporter of opium in the world. Why this astonishing “cover” of false students canvassers for poor artwork? The Israeli network seemed to hold lists of names. Its members knew at which office or which private residence to go. The objective was apparently to make contact, even for a short time.

According to an Israeli specialist in espionage, “this story is a ridiculous joke, and is not serious.” Contacted, the services of the Israeli Prime Minister still had not, as of Monday evening March 4, answered our questions. The American Justice Department indicated to us that “a dozen” of these “students” would still be imprisoned indefinitely, and all the others had been released or deported. The FBI indicated to us that it will not make “any comment at this stage.” The CIA, the FBI, the DEA, the INS, the NSA, the Justice Department and the Pentagon have all designated an investigator on this file.

Sylvain Cypel is a Jewish French journalist who lived in Israel for 12 years.

Broadcast report that Fox News took down and would not provide to Le Monde: