You Are Here: Home → Flashback: The Night of the Broken Clubs

Flashback: The Night of the Broken Clubs 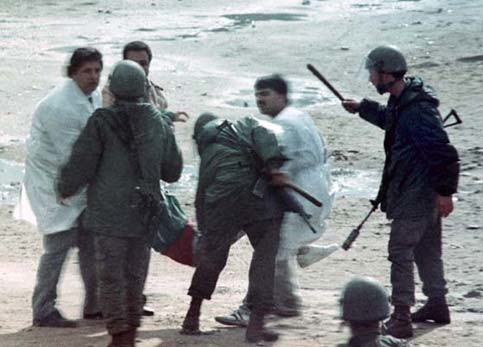 …And then the soldiers carried out the orders they had been given: To break both arms and both legs by clubbing the Arabs…

…I am withholding the names and a few other identifying details, but the rest is presented in full and accurately. It could happen to almost anyone.

When the lieutenant colonel gave the orders, other officers of different ranks were present in the room and did not comment or interfere. Incensed, Captain A. said he would carry out the mission only under protest.

That afternoon, Colonel Z. summoned Captain A. to discuss “how all this would affect the company’s morale.” Captain A. said that if Colonel Z. personally talked to the company it could help matters, so a talk was scheduled for the next day, after the night action in the village of Hawara.

In the evening, the company—40 soldiers and four officers—boarded a civilian bus and met three more officers in two jeeps. One of the officers, Major G., complained to Captain A. that he needed the whole operation like a hole in the head and that it could ruin his relations with the muhktar of the village.

At approximately 11 p.m., the bus and the two jeeps arrived in Hawara. Major G. proposed that rather than have the soldiers go from house to house, he would instruct the muhktar to gather the wanted men in one spot. Major G. gave the muhktar a list of 12 persons, and they were rounded up without any problems. They sat on the sidewalk, by shops in the center of the village and didn’t resist.

Then, shackled with their hands behind their backs, they were led to the bus. Major G. left the site and disappeared. The bus left the village but, after 200 to 300 meters, it stopped beside an orchard. “The locals” were taken off the bus and led into the orchard in four groups of three. Each group was accompanied by an officer. Captain A., although not psychologically prepared to take part in the action, ensured that it was being carried out in accordance with the orders. He later commented that dividing the men into groups of three was necessary in order to remain “on top of the situation.”

In the darkness, in the orchard, the soldiers also shackled the Hawara residents’ legs and laid them on the ground. The officers urged the soldiers to “get it over with quickly, so that we can leave and forget about it.” Flannel was stuffed into the Arabs’ mouths to prevent them from screaming and the bus driver revved up the motor so that the noise would drown out the cries.

And then the soldiers carried out the orders they had been given:

The mission was completed. Most of the wooden clubs used broke. The soldiers who would not participate in the beatings were allowed to remain in the bus.

Four and a half months later, at the beginning of May 1988, the Red Cross lodged a complaint with the police about the brutality of the IDF soldiers toward the residents of Hawara. An investigation was launched and some of the findings are presented here. If the Red Cross had not complained, the entire affair would have remained buried in the orchard.

We are not talking here about an “aberration.” Exactly two days before, in accordance with the same instructions, the same actors and additional officers carried out the same action in the nearby village of Beita.

The officer in charge didn’t hear, didn’t see and didn’t know anything.

The commander, Colonel Z., didn’t hear, didn’t see and didn’t know anything, although others testified that he met with the support company prior to and following the action in the village of Hawara.

The regional commander, Lieutenant Colonel Y., refus0  ed to give his version in writing or orally Major G. confirmed that there had been no need to employ force while making the arrests.

Captain A. said that immediately after the action he promised the disconcerted soldiers that he would ask Colonel Z. “not to give us any more such tasks.” He justified that “this case, among other things, made me leave the IDF.”

Although the military police inquiry established that “Colonel Y. deviated from his authority by ordering the beating of locals,” since the incident in Hawara some of the officers involved have been promoted, and no one has been brought to trial.

Yossi Safid was a writer and journalist who became an Israeli government official. Israel Shahak was an Israeli author.