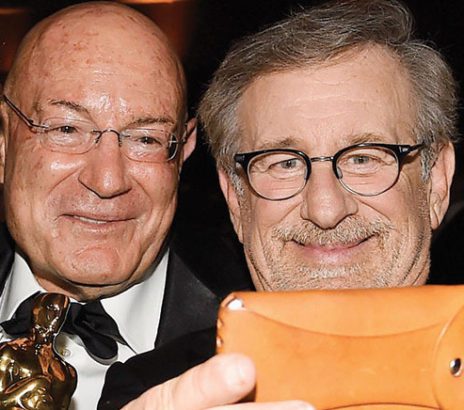 Producer Arnon Milchan and Director Steven Spielberg attend the 88th Annual Academy Awards Governors Ball, February 28, 2016 in Hollywood, California. Milchan says he spent his many years in Hollywood as an agent for Israeli intelligence, helping obtain embargoed technologies and materials that enabled Israel to develop a nuclear weapon. He says that “other big Hollywood names were connected to [his] covert affairs.” (PHOTO: Hollywood Reporter)

Israel has been allowed to get away with massive espionage directed against the US and the theft of material and technology – while also being engaged in a conspiracy that distorts America’s foreign policy, largely done to keep getting the billions of dollars that it is not entitled to receive under existing American law…

By Philip Giraldi, reposted from Strategic Culture (images and annotations added by IAK)

Few Americans are aware of the fact that no U.S. government official, to include congressmen, can in any way mention or discuss Israel’s nuclear arsenal, which is estimated by some observers to consist of as many as 200 tactical nuclear weapons which can be delivered on target by air, land or sea.

The prohibition is spelled out in a Department of Energy “classification bulletin” graded Secret, which was issued on September 6, 2012 and bears the file number WPN-136. The subject line reads “Guidance on Release of information Relating to the Potential for an Israeli Nuclear Capability.” It would be interesting to learn exactly how the text of the memo reads, but in spite of repeated attempts to obtain a copy under the Freedom of Information Act, the entire body of the document is completely blacked out. 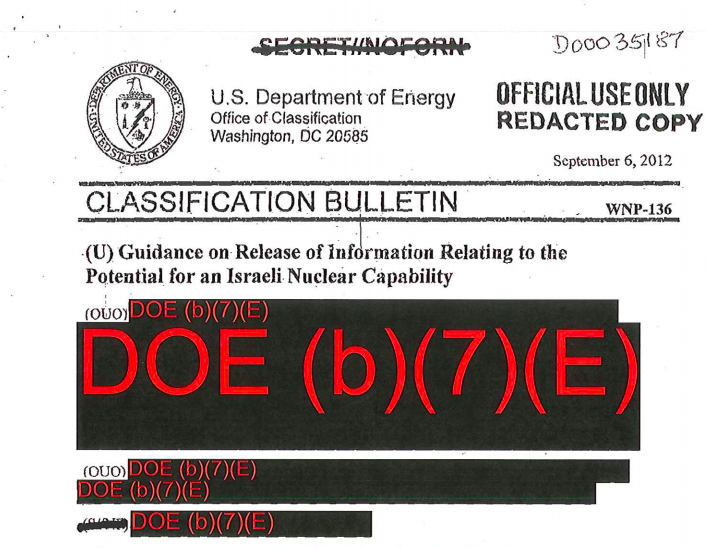 What is known in that the memo is basically a gag order, presumably issued by the Barack Obama Administration to block any official from making a comment that might be interpreted to mean that the federal government recognizes that Israel has nuclear weapons. The silence over the Israeli arsenal dates back to an agreement made by President Richard Nixon with Israeli Prime Minister Golda Meir. In its most recent manifestation, President Barack Obama, when asked if he knew of “any country in the Middle East that has nuclear weapons,” responded “I don’t want to speculate.” He was, of course, lying.

The bulletin’s first known victim was Los Alamos National Laboratory nuclear policy specialist James Doyle who in 2013 wrote a sentence suggesting that Israel had a nuclear arsenal. It appeared in an article entitled “Why Eliminate Nuclear Weapons?” which had been security cleared by Los Alamos and appeared in the journal of the International Institute for Strategic Studies. An unknown congressional staffer demanded a review and Doyle had his home computer searched before being fired. [This article has been removed from the IISS website, but is archived here.]

Israel, as is so often the case, gets a free pass on what is for others criminal behavior. Its nuclear program was created by stealing American uranium and weapons technology. Preventing nuclear proliferation was in fact a major objective of the U.S. government when in the early 1960s President John F. Kennedy learned that Tel Aviv was developing a nuclear weapon from a CIA report. He told the Israelis to terminate their program or risk losing American political and economic support but was killed before any steps were taken to end the project.

Israel accelerated its nuclear program after the death of President Kennedy. By 1965, it had obtained the raw material for a bomb consisting of U.S. government owned highly enriched weapons grade uranium obtained from a company in Pennsylvania called NUMEC, which was founded in 1956 and owned by Zalman Mordecai Shapiro, head of the Pittsburgh chapter of the Zionist Organization of America. NUMEC was a supplier of enriched uranium for government projects but it was also from the start a front for the Israeli nuclear program, with its chief funder David Lowenthal, a leading Zionist, traveling to Israel at least once a month where he would meet with an old friend Meir Amit, who headed Israeli intelligence. NUMEC covered the shipment of enriched uranium to Israel by claiming the metal was “lost,” losses that totaled nearly six hundred pounds, enough to produce dozens of weapons. Such was the importance of the operation that in 1968 NUMEC even received a private incognito visit from a top Israeli spymaster Rafi Eitan who later ran the spy Jonathan Pollard.

Also there was physical evidence relating to the diversion of the uranium. Refined uranium has a technical signature that permit identification of its source. Traces of uranium from NUMEC were identified by Department of Energy inspectors in Israel in 1978. The Central Intelligence Agency has also looked into the diversion of enriched uranium from the NUMEC plant and concluded that it was part of a broader program to obtain the technology and raw materials for a nuclear device for Israel.

Milchan with News Corp. President/Chief operating officer Peter Chernin and Co-Chairman of Fox Filmed Entertainment Tom Rothman at the premiere of “Mr. & Mrs. Smith” on June 7, 2005. Both Chernin and Rothman are Israel partisans. In 2008 Chernin presented Milchan with a lifetime achievement award at an event honoring Israel, and during Israel’s 2014 onslaught against Gazans, Rothman signed a pro-Israel letter.

With the uranium in hand, the stealing of the advanced technology needed to make a nuclear weapon, which is where Hollywood movie producer Arnon Milchan comes into the story. Milchan was born in Israel but moved to the United States and eventually wound up as the founder-owner of New Regency Films. In a November 25, 2013 interview on Israeli television Milchan admitted that he had spent his many years in Hollywood as an agent for Israeli intelligence, helping obtain embargoed technologies and materials that enabled Israel to develop a nuclear weapon. He worked for Israel’s Bureau of Science and Liaison acquisition division of Mossad, referred to as the LAKAM spy agency.

Milchan admitted in the interview that “I did it for my country and I’m proud of it.” He was not referring to the United States. He also said that “other big Hollywood names were connected to [his] covert affairs.” Among other successes, he obtained through his company Heli Trading 800 krytons, the sophisticated triggers for nuclear weapons. The devices were acquired from the California top secret defense contractor MILCO International. Milchan personally recruited MILCO’s president Richard Kelly Smyth as an agent before turning him over to another Heli Trading employee, future Israeli Prime Minister Benjamin Netanyahu for handling. Smyth was eventually arrested in 1985 but insofar as is known neither Milchan nor Netanyahu has ever been questioned by the FBI regarding the thefts.

Israel’s nukes are now in the news because of an Op-Ed that surprisingly appeared in the New York Times on August 11th written by Peter Beinart entitled “America Needs to Start Telling the Truth About Israel’s Nukes.” Beinart wrote that “Israel already has nuclear weapons. You’d just never know it from America’s leaders, who have spent the last half-century feigning ignorance. This deceit undercuts America’s supposed commitment to nuclear nonproliferation, and it distorts the American debate over Iran. It’s time for the Biden administration to tell the truth.”

Beinart points out that the American public can hardly make an informed judgement regarding what should be done in the Middle East if it is uncertain whether Israel is a nuclear power or not, but one issue he does not discuss is the issue of money.

US aid to Israel illegal under US law

IRMEP’s Grant Smith, who has been challenging the secrecy surrounding the Israeli arsenal, recently observed that “The Symington & Glenn provisions of the Arms Export Control Act (22 USC §2799aa-1: Nuclear reprocessing transfers, illegal exports for nuclear explosive devices, transfers of nuclear explosive devices, and nuclear detonations) forbid U.S. foreign aid to countries with nuclear weapons programs that are not signatories to the Treaty on the Proliferation of Nuclear Weapons, absent required special procedures… But no member of Congress has taken up this issue — or even mentioned Israel’s nuclear weapons arsenal.”

Smith is frustrated by the reluctance of progressives in Congress, who have opposed recent additional $735 million in military aid to Israel permitting it to rearm after its assault on the Gazans, to ignore the gag order and raise the issue of the nuclear arsenal.

He writes “It seems as though even these members of Congress, as well as the rest of the U.S. government, are abiding by this secret gag order when they could take action which would challenge the administration’s refusal to acknowledge Israel’s nuclear weapons and possibly stop $3.8 billion in taxpayer money from going to Israel.”

That the Energy Department document exists at all is recognition of the astonishing power of the Israeli Lobby over the U.S. government at all levels, particularly as it is intended to ignore or even negate other legislation passed by congress to combat nuclear proliferation. And the denial of what everyone knows to be true, i.e. that Israel has a nuclear arsenal, appears to all come down to the ability of the United States government to continue to reward a wealthy Israel with billions of dollars of taxpayer money every year.

To suggest that the arrangement is nefarious would be to put it mildly, but it is more that that. It is criminal. Israel has been allowed to get away with massive espionage directed against the United States and the theft of material and technology while also since the 1970s being engaged in a conspiracy with the U.S. government that distorts America’s foreign policy, largely done to keep getting the billions of dollars that it is not entitled to receive under existing American law. It is shameful. Beyond that, it might be construed as treason.

[Because of the influence of the pro-Israel lobby, US politicians from both parties consistently vote to give Israel over $10 million per day of Americans’ tax money. To tell Congress to stop sending this money to Israel, go here.]

Philip M. Giraldi, Ph.D., is a former CIA counter-terrorism specialist and military intelligence officer who served nineteen years overseas in Turkey, Italy, Germany, and Spain. Giraldi was awarded an MA and PhD from the University of London in European History and holds a Bachelor of Arts with Honors from the University of Chicago. He speaks Spanish, Italian, German, and Turkish. He is currently executive director of the Council for the National Interest, which seeks to promote a U.S. foreign policy in the Middle East that is consistent with American values and interests.