You Are Here: Home → Senator Patrick Leahy speaks out on killing of Shireen Abu Akleh 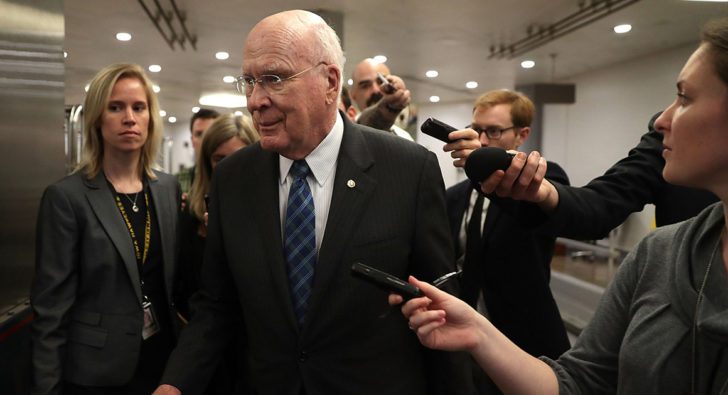 Senator Patrick Leahy (D-VT) calls out the Biden administration’s feeble response to Israel’s killing of a prominent American citizen: he asks the hard questions (why haven’t they been asked before?) that could trigger the withholding of US military aid to Israel.

On May 19th, I echoed Secretary of State Blinken’s call for an “independent, credible investigation” of the violent death of widely respected Palestinian-American journalist Shireen Abu Akleh.  At that time, several Members of Congress called for the FBI to be involved, as did I.  That would be customary and appropriate after a tragedy like this involving a prominent American killed overseas under questionable circumstances.

Secretary Blinken later said, and I agree, that “[w]hen that investigation happens, we will follow the facts, wherever they lead.  It’s as straightforward as that.”

Unfortunately, there has been no independent, credible investigation.  Two weeks ago, without providing any details, the Israeli government, after first blaming the Palestinians for Ms. Abu Akleh’s death, stated that she was likely shot, by mistake, by an unnamed Israeli soldier.  The State Department has concluded that gunfire from Israeli Defense Force (IDF) positions was likely responsible, but that there was “no evidence to indicate her killing was intentional.”

The Department acknowledges that conclusion was not the result of an investigation, but rather a review of information provided by the IDF and the Palestinian Authority (PA).  We are told that “the Administration continues to believe that cooperation among Israel, the Palestinian Authority, and the U.S. Security Coordinator (USSC) is the best path to support a thorough, transparent, and impartial investigation.”

No one can credibly think that the PA, which does not have access to the IDF soldier who likely fired the bullet that killed Ms. Abu Akleh or to other IDF personnel who may have information about it, or Israel which has a history of investigations of shootings by IDF soldiers that rarely result in accountability, can be completely relied on to determine and make public all the facts of what happened in this case.

The USSC, echoing the conclusion of the IDF, apparently did not interview any of the IDF soldiers or any other witnesses.  To say that fatally shooting an unarmed person, and in this case one with PRESS written in bold letters on her clothing, was not intentional, without providing any evidence to support that conclusion, calls into question the State Department’s commitment to an independent, credible investigation and to “follow the facts”.

What specific evidence led to the USSC’s conclusion “that there is no reason to believe that this was intentional but rather the result of tragic circumstances?”

What were the “tragic circumstances” the USSC was referring to?

If the soldier who fired the fatal shot did not intend to kill Ms. Abu Akleh, what did he intend?

If, as the Israeli authorities appear to be saying, the soldier missed who he was aiming at and hit Ms. Abu Akleh by mistake, who was he aiming at?  What evidence is there, if any, that anyone in the immediate vicinity of where Ms. Abu Akleh was shot was firing at the IDF soldier who killed her?

What steps will the State Department take to ensure the independent, credible investigation the Secretary, and many others, have called for?

What steps has the State Department taken to determine whether the Leahy Law applies in this case? [NOTE: read about the Leahy Laws here.]

I have also urged Israeli authorities to discipline those who were responsible for, and participated in, the chaos that erupted during Ms. Abu Akleh’s funeral procession, when Israeli police needlessly beat mourners with batons, including the pallbearers, causing them to momentarily drop one end of the casket.  Has anything been done?

There is an increasing foreboding that, as in so many other cases and like the murder of Jamal Khashoggi, there will never be the independent, credible investigation and accountability that Ms. Abu Akleh’s family, the Secretary of State, I, and others have called for.  That would further jeopardize the safety of journalists everywhere who courageously risk their lives to inform the public.

An independent, credible investigation – meaning not by the IDF and not by the PA – but with their full cooperation, must be conducted and the findings made public.

READ MORE ABOUT THE KILLING OF SHIREEN ABU AKLEH: