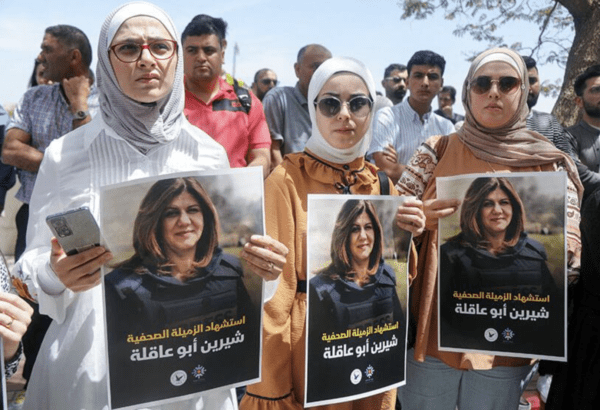 Women hold images of Al Jazeera reporter Shireen Abu Akleh, killed during an Israeli raid in the West Bank on 11 May 2022.

CNN investigates the killing of Palestinian-American journalist Shireen Abu Akleh on May 11 and says she was targeted by an Israeli sniper positioned 600 feet away from her with a clear line of sight.

Today CNN published its own investigation of the killing of Palestinian-American journalist Shireen Abu Akleh on May 11, and it says that new eyewitnesses, videos and ballistic analysis bear out what Abu Akleh’s colleagues said that day: The AlJazeera correspondent was targeted by an Israeli sniper positioned about 600 feet away from her with a clear line of sight.

[A]n investigation by CNN offers new evidence — including two videos of the scene of the shooting — that there was no active combat, nor any Palestinian militants, near Abu Akleh in the moments leading up to her death.

Videos obtained by CNN, corroborated by testimony from eight eyewitnesses, an audio forensic analyst and an explosive weapons expert, suggest that Abu Akleh was shot dead in a targeted attack by Israeli forces.

CNN’s devastating report shows the media are not dropping the killing of Shireen Abu Akleh, even if the Israeli government is. Hopefully this will bring added pressure on the U.S. government to investigate the case on its own, as 57 Congresspeople have urged it to do, and demand accountability for the killing.

The new investigation, which follows on similar forensic analyses by Bellingcat and B’Tselem, supports the assertions of journalist eyewitnesses, in the face of Israeli denials.

All of the journalists were wearing protective blue vests that identified them as members of the news media. ​

“We stood in front of the Israeli military vehicles for about five to ten minutes before we made moves to ensure they saw us. And this is a habit of ours as journalists, we move as a group and we stand in front of them so they know we are journalists, and then we start moving,” [reporter Shatha] Hanaysha told CNN…

CNN points out that an Israeli army spokesperson Ran Kochav described the journalists as “armed with cameras” later that day.

His video captures the moment that shots were fired at the four journalists — Abu Akleh, Hanaysha, another Palestinian journalist, Mujahid al-Saadi, and Al Jazeera producer Ali al-Samoudi, who was injured in the gunfire — as they walked toward the Israeli vehicles.

In the footage, Abu Akleh can be seen turning away from the barrage. The footage shows a direct line of sight towards the Israeli convoy.

“We saw around four or five military vehicles on that street with rifles sticking out of them and one of them shot Shireen. We were standing right there, we saw it. When we tried to approach her, they shot at us. I tried to cross the street to help, but I couldn’t,” Awad said.

Jamal Huwail, a professor at the Arab American University in Jenin, who helped drag Abu Akleh’s lifeless body from the road, said he believed the shots were coming from one of the Israeli vehicles, which he described as a “new model which had an opening for snipers,” because of the elevation and direction of the bullets.

“They were shooting directly at the journalists,” Huwail said.

The investigation analyzed videos and photos of the scene with the help of two military experts, to conclude that the shot that hit Abu Akleh was fired by a sniper aiming at a target in a manner that points to Israeli soldiers positioned about 600 feet away.

“The number of strike marks on the tree where Shireen was standing proves this wasn’t a random shot, she was targeted,” [Chris] Cobb-Smith [a weapons expert and British army veteran] told CNN, adding that, in sharp contrast, the majority of gunfire from Palestinians captured on camera that day were “random sprays.”…

At 200 meters, Cobb-Smith said that there was “no chance” that random firing would result in three or four shots hitting in such a tight configuration. “From the strike marks on the tree, it appears that the shots, one of which hit Shireen, came from down the street from the direction of the IDF troops.”

A second expert consulted by CNN was Robert Maher, professor of electrical and computer engineering at Montana State University, who specializes in forensic audio analysis. Maher analyzed the intervals between the sounds of bullets leaving the barrel and the subsequent muzzle explosions recorded on video to assess the distance of the shooter from the camera.

“That would correspond to a distance of something between 177 and 197 meters,” or 580 and 646 feet, he said in an email to CNN, which corresponds almost exactly with the Israeli sniper’s position.

The best thing about the CNN report is that it shows that international media are not going to forget about Shireen Abu Akleh’s killing. We can only hope that more media and free speech organizations become advocates for Abu Akleh in death, as governments try to push the case aside.

Timeline of Israelis and Palestinians killed since 2000