You Are Here: Home → More Disinformation from Israel about Iran

More Disinformation from Israel about Iran 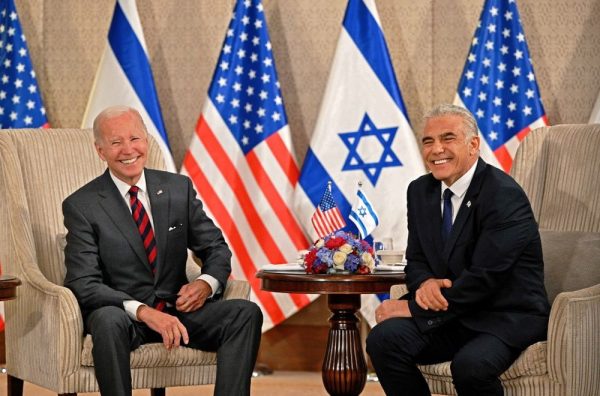 Weakening Iran and possibly even replacing its government is the most compelling issue for Israel and its powerful US domestic lobby, but the Israeli plan is much broader than that: to make the United States the junior partner providing the money and weapons in Israel’s effort to militarily dominate the Middle East…

Joe Biden ran for president in 2020 with a pledge to restore the Joint Comprehensive Plan of Action (JCPOA) with Iran, which Donald Trump had withdrawn from in May 2018 under pressure from Republican Party Jewish donors, most notably underwritten by an estimated $100 million coming from now deceased Sheldon Adelson’s Las Vegas casino fortune.

The JCPOA might plausibly be regarded as the only major diplomatic success for the Barack Obama Administration, which featured Biden as Vice President, and it was good for the US due to its curb on proliferation, as well as being a benefit for the entire Middle East region as it made less likely a “weapons of mass destruction” arms race involving the Egyptians and Saudis.

Predictably, however, the pledge did not please the state of Israel.

For decades Israel has urged the US to attack Iran

For three decades, Israel has been urging the United States to use force to eliminate what it refers to as the Iranian nuclear weapons program, a program that does not exist and might never have existed. The nuclear weapons threat raised by Israel might be seen as a disinformational wedge issue to bring about the complete destruction of the Iranian military capability by the United States. Israel seeks to exploit its influence over the US government and media to bring that about.

To be sure, weakening Iran and possibly even replacing its government is the most compelling issue for Israel and its powerful US domestic lobby, but the Israeli plan is much broader than that: to make the United States the junior partner providing the money and weapons in an effort to militarily dominate the Middle East.

Knowing that both Donald Trump and Joe Biden were willing to concede actual US national interests in response to Israeli pressure, Prime Minister Benjamin Netanyahu and his replacement Yair Lapid have sent waves of top-level officials to cajole both Congress and the White House into giving Jerusalem whatever it wants.

This flow of “experts” arriving with their maps and charts in hand has increased as the realization that a politically weak and clueless Joe Biden will cave under even the slightest pressure has grown.

Biden has demonstrated particular gutlessness in his recent failure to seek a full investigation and consequences for the Israeli Army murder of Palestinian-American journalist Shireen Abu Akleh, deferring to Israel’s complete unwillingness to establish some form of accountability and Prime Minister Lapid’s declaration that the current level of his army’s use of force against the Palestinians will continue.

Biden has also backed down on rejoining the JCPOA, declaring that the issue is now “off the table.” Secretary of State Tony Blinken has confirmed that decision, declaring that any new arrangement with Iran is “unlikely.”

Preceding the Administration’s decision to ignore American interests in deference to Israeli concerns, there were frequent visits to Washington by Israeli Defense Minister Benny Gantz and also by other senior officials who arrived in DC to sell a product.

The latest pitch involves the Iranian threat and the continuation of a free hand to attack neighboring Syria but there also has been a bizarre drive to have the US State Department declare that the Palestinian civic and human rights organizations that Israel has been shutting down are “terrorist organizations.” Even though a US intelligence and law enforcement agency review has declared that not to be the case, the Biden team is predictably waffling under Israeli pressure.

This is how State Department spokesman Ned “Pencil Neck” Price responded to a question regarding the Israeli claims: “Our Israeli partners have in recent days provided us with additional information. They provided this information not only to the department but also to a range of our interagency partners. We are continuing to review this and that process is ongoing.” Price added that he didn’t want to “prejudge” the information. Pretty gutless Ned, huh? Even for you, who also excused the killing of Abu Akleh, saying “it was a horrific tragedy, but not one that should be prosecuted.

This was not an intentional, targeted killing. This was the tragic result of a gunfight in the context of an Israeli raid in the West Bank.” Interestingly, Ned surely knew that there was no gunfight anywhere near where she was killed, which makes him a liar as well as a man bereft of any morality. And I love the fact that Ned declares we Americans are “partners” with Israel. Junior partners, clearly.

Israel has never provided any actual hard intelligence to back up its claims, though it has several times been caught fabricating evidence. Senator Bernie Sanders’ Foreign Policy Advisor Matt Duss tweeted after the latest round of pressure to call the Palestinians “terrorists” that “This isn’t about intel sharing or security. It’s political pressure to justify political repression. The admin knows, as our allies do, that the designations are false. The question is whether [the Biden Administration is] willing to do anything about it.”

One should consider that what for Israel, the United States, Russia, Ukraine and nearly everyone else what is passed off as intelligence is anything but. It is instead more often than not a tightly woven argument to convince other countries, the public and the media that something that is supportive of one’s policies is true and should be considered corroborative. This is how we the people have now come to see global events through the prism of an official lie factory.

Another recent ploy by Israel to enable its continued bombardment of neighboring Syria is a tale of how Israeli intelligence has developed information that Iran is using Syria to construct technically sophisticated weapons that will be used against the Israelis. Defense Minister Benny Gantz, speaking in New York City last Monday, claimed that Iran has used “10 military facilities in Syria to produce advanced missiles and weapons for its proxies.”

One might observe that Gantz’s use of a map to show where the alleged facilities are located was convincing of nothing as it was a graphic produced by the Israeli government, somewhat like the dreck that is flowing out of Ukraine at the moment. And there is a bit of logical inconsistency in the tale in that Iran has its own arms industry and does not need to build weapons in Syria.

There is also the question of why is Gantz speaking in New York? The answer is obvious. Israel is speaking to a gullible American audience about the alleged Iranian threat and Syrian culpability. Predictably, nothing was said about Israel’s recent war crime bombing of the international airport in Aleppo.

And there’s more, as there always is with Israel.

The Israeli government is also running full speed with brand new claims about an alleged secret Iranian nuclear weapons program. The information was presented to the US and German governments by Prime Minister Yair Lapid with the claim that it “proves the Iranians are cheating as we speak.” Lapid told the Germans that the Biden Administration had hardened its stance against Iran vis-à-vis the JCPOA negotiations in response to the new information. What the new intelligence consists of might lead to some speculation, but Israel’s claims along those lines have been frequent for the past twenty years and also regularly found to be both malicious and fabricated.

Finally, who says that the Israelis and their rabid Jewish supporters in the United States don’t have a sense of humor? A story making the rounds in the Jewish media in the US and featured in the Jewish News Syndicate asks the question “[Why] 21 years later, [the] US still doesn’t recognize Iran’s role in 9/11.?”

The discussion features Caroline Glick and David Wurmser, two noted neocons and Israel-firsters. Wurmser is of course described as “an expert on Middle East affairs” rather than as a Zionist extremist while Glick, who lives in Israel, is among the most rabid journalists calling for “deterrence and containment” of Iran, with the US military doing the heavy lifting.

Glick also recalls 9/11, stating that “America’s willful blindness to Iran’s role in global terrorism, including in the September 11 attacks, is part of the collective amnesia about the events of September 11.” When I stopped laughing, I continued reading to see if the two honorable Zionists would also mention the Israeli art students who were all over the place spying on the US and the five Israeli dancing Shlomo “movers” who clearly had prior knowledge of what was about to take place and were seen celebrating the sight of the burning twin towers. And then there was the quote by then Prime Minister Benjamin Netanyahu concerning 9/11 that “We [Israelis] are benefitting from one thing, and that is the attack on the twin towers and Pentagon, and the American struggle in Iraq.” So, Israel actually had a motive. Makes you wonder… Who really did 9/11?

Philip M. Giraldi, Ph.D., is a former military intelligence officer and CIA counter-terrorism specialist  who served nineteen years overseas. He is Executive Director of the Council for the National Interest, which seeks to promote a U.S. foreign policy in the Middle East that is consistent with American values and interests.