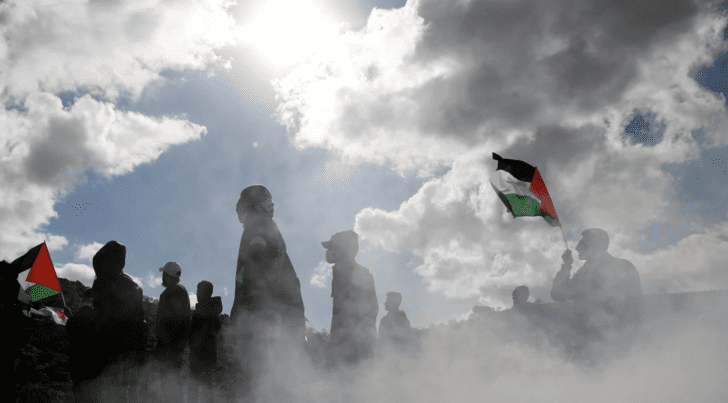 Longing for a genuine peace plan: Palestinian demonstrators protest in al-Mughayyir village near Ramallah, in the Israeli-occupied West Bank, January 3, 2020.

At the UN today, Palestinian President Mahmoud Abbas says: Give peace, not apartheid, a chance, and offers a serious proposal to achieve a just and lasting peace in the Mideast – a peace plan that works for Palestinians.

A vision of peace can never mean legitimizing violations of international law. Donald Trump’s so-called “Peace to Prosperity” Mideast plan, unveiled at the White House, has done just that.

by Saeb Erakat, reposted from Ha’aretz

It is an annexationist plan that well defines the current U.S. administration’s political blindness, arrogance, and ignorance. While both Israel and the Trump Administration try to mislead the world with promises of a “better future,” the fact remains that the ideological synergy between the two populist right-wing leaderships shares only one vision: apartheid.

This annexation plan is a collection of Israeli positions, many of which were presented verbatim by Israeli counterparts in previous negotiations. It’s a negotiated plan between Israeli settlers and U.S. representatives who are infamous supporters of Israel’s illegal colonial-settlement enterprise. It provides a pathway to apartheid as embodied in the map they presented, and not “two states.”

Aaron David Miller, one of the most experienced former U.S. officials involved in the peace process, said he told Jared Kushner not to act as “Israel’s lawyer” if he wanted to succeed. Evidently, Kushner went beyond that – becoming the lawyer of Israel’s annexation and colonization policies.

Arguing that annexation and colonization, manifestly illegal under international law, should be normalized as the outcome of their plan, sets a dangerous precedent for any powerful country to impose any reality it deems necessary, even in violation of international law. Whoever signs on to President Trump’s plan, or those few who suggest that this document could be taken as a basis for any engagement in negotiations, are plainly telling the Palestinian people to accept a war crime as the basis for any talks.

Clearly, this is not about rejecting a peace proposal. This is about saying no to an attempt of legitimizing theft, to say the least, as a tool in international relations.

The distorted logic of Trump’s team suggests that achieving peace means accommodating all the desires of Israeli extremists. The plan downright endorses the perpetuation of Israel’s colonial occupation of Palestine and the fragmentation of its land. It grants Israel full control over Jerusalem and “legalizes” its settlements, the transfer of its population into occupied Palestinian territory, and negates Palestinian refugee rights.

On top of that, Trump’s team expects the people of Palestine to appreciate this as an unprecedented gift. On more than one occasion, Mr. Kushner has declared he was certain that the Palestinians were actually “surprised” by how “good” the plan is for them. What does this show? A combination of ignorance, complicity and disrespect.

On Tuesday, President Mahmoud Abbas will be addressing the United Nations Security Council, the body entrusted with preserving world peace and security, with an urgent message: Give peace, not apartheid, a chance.

Our vision of peace is based on ending Israel’s occupation, towards the achievement of an independent and sovereign State of Palestine on the 1967 borders, with East Jerusalem as its capital. This is the historic concession for peace we made in 1988, accepting Israel’s control over 78 percent of historic Palestine.

We call for a free Palestine that coexists in peace, security and prosperity with the rest of the region. All permanent status issues should be resolved in a just manner that honors international law and relevant UN resolutions. The Arab Peace Initiative will be the entry point for further diplomatic and trade relations between the various parties.

Ensuring that the international community is aware of what both Israel and the Trump administration are doing is not enough. Saving the prospects for peace requires engagement, ending Israel’s impunity, preventing the possibility of annexation and providing the conditions for meaningful talks based on the internationally agreed-upon terms of reference for the Middle East Peace Process.

A peace plan that works

Our proposal includes the establishment of an umbrella group of a number of peace-loving countries to facilitate a meaningful peace process. A group that works to implement international law, rather than to facilitate an annexation process made to violate it.

While endorsing direct negotiations based on international law and UN resolutions, the Arab League and the Organization of Islamic Cooperation have already said no to a plan that neither endorses a sovereign State of Palestine, with East Jerusalem as its capital, nor respects the historic status quo agreement preserving our Holy Sites in the city. The African Union and the European Union have already stated that the Trump plan contradicts international law.

Today, Palestine is offering the world a serious proposal to achieve a just and lasting peace. We are calling upon the international community to make sure that a rules-based world order, and third party responsibility, is the only way forward for everyone. When the world implements fundamental principles of law and justice, Palestine should not be the only exception.

Dr. Saeb Erekat is the Secretary General of the PLO and Chief Palestinian negotiator. Twitter: @ErakatSaeb

Analyses of Trump’s Peace Plan for Israel-Palestine, “Deal of the Century” (Updated)