You Are Here: Home → Adelson to donate $100 million to Trump & Repubs, fundraisers say 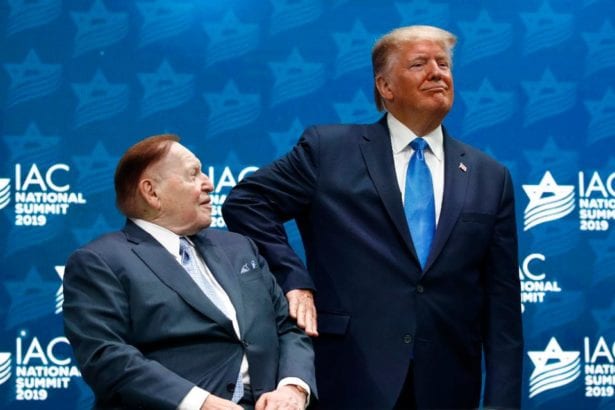 Billionaire casino magnate Sheldon Adelson, a staunchly pro-Israel campaign donor, expected to give to Super Pacs and ‘dark money’ groups. His donations have in the past been followed by strong pro-Israel policy shifts.

by Peter Stone, reposted from The Guardian

Adelson’s hefty checks are expected to be written to several Super Pacs – political groups that have to disclose their donors – as well as “dark money” not-for-profit organizations that can keep their donors secret, say the fundraisers.

One source predicted that Adelson, who in tandem with his Israeli-born wife, Miriam, donated more than $100m to Super Pacs and dark money groups in each of the last two presidential cycles, could wind up contributing close to $200m in 2020 given their recent spending patterns and appreciation for Trump’s policies.

Adelson and his wife have been opening their wallets wider in the Trump era.

The Adelsons, who typically give some of their bigger checks towards the end of campaigns, in 2018 spent a personal record of $124m – just in publicly disclosed donations to Super Pacs, campaign committees and candidates, according to the Center for Responsive Politics.

Ever since the 2016 campaign, Adelson and Trump have courted one another, bonding more closely as Trump has tilted US policies on Israel to favor goals in sync with Adelson and other big conservative donors and activists in the Jewish and evangelical worlds.

With a net worth that Forbes pegs at $39bn, Adelson has long championed several of the hardline pro-Israel moves that Trump has made, including relocating the US embassy from Tel Aviv to Jerusalem and ditching the Iran nuclear deal signed by the Obama administration.

Last month, the Adelsons were at the White House for the unveiling of Trump’s Middle East peace plan, which Palestinians and most Arab countries rejected as too favorable to Israel but Trump dubbed the “deal of the century”.

Before the official ceremony, Adelson met briefly with Trump, according to one source. During his presidency, Adelson has had other meetings with Trump in Washington and Las Vegas, and periodically they talk by phone, say sources.

At least a handful of Super Pacs and not-for-profit groups are expected to receive seven-figure Adelson checks in 2020, including several he has backed heavily in recent cycles that are aimed at helping Trump and congressional candidates.

For instance, Adelson has been a major funder and board member of the Republican Jewish Coalition, a pro-Israel lobbying group that plans a record $10m-plus drive to woo more Jewish voters in key swing states including Florida, Ohio and Pennsylvania, which Trump is hoping to win again as he did in 2016, say RJC donors.

The RJC is chaired by the ex-senator Norm Coleman, a DC lobbyist with the law firm Hogan Lovells, who is said to have strong ties to Adelson that benefit the RJC and other Super Pacs and dark money outfits where Coleman is a big player.

Coleman helps lead fundraising for a Super Pac, the Congressional Leadership Fund, and a dark money outfit, the American Action Network, that respectively back Republican House members and their policies and have received seven-figure checks from the Adelsons in recent elections.

In 2018, according to the non-partisan Center for Responsive Politics, the Adelsons gave a whopping $55m to the Congressional Leadership Fund, which spent a total of $138m in the last elections in an unsuccessful effort to hold on to the Republican House majority.

In 2016, the Adelsons gave $82m overall to Super Pacs and committees that backed Trump and Republican candidates, including the Super Pac Future 45, which received $25m from Adelson to run ads against Hillary Clinton, according to public reports. The Adelsons donated tens of millions more to some dark money groups, say Republican donors.

At an inaugural gala, Trump praised the Adelsons, thanking them for ponying up $120m to help his campaign and other GOP candidates in 2016, say two attendees at the event.

The day before Trump announced in May 2018 that the US was pulling out of the nuclear accord with Iran, Adelson flew into DC from his home in Las Vegas and met privately with Trump and a few top aides, including the vice-president, Mike Pence, and the then national security adviser, John Bolton, with whom Adelson had strong ties.

A few days later, Adelson was in Jerusalem with a few dozen fellow board members of the RJC and some top Trump aides, including Jared Kushner, to celebrate the official ceremony marking the US embassy move to Jerusalem, a top priority for Adelson and the RJC.

The veteran GOP fundraiser Mel Sembler, who also sits on the RJC board, thinks Adelson’s input was significant in Trump’s decisions to move the embassy and pull out of the Iranian nuclear deal. “Adelson was an important factor in all these decisions,” Sembler told McClatchy in May 2018.

“From an Israeli perspective, rejecting the Iranian deal and recognizing Jerusalem as the capital [reveal] support for Israel that is unparalleled and deeply appreciated,” Coleman has said.

Miriam Adelson, a physician, has also garnered attention from Trump. In November 2018, Trump named her one of seven recipients of the Presidential Medal of Freedom at a DC ceremony, just days after her husband attended a White House party with Trump to view the election results.

The president’s courting of the Adelsons contradicts his claims in 2016, when Trump donned a populist mantle and pledged to “drain the swamp” of big money and lobbying.

Watch: Sheldon Adelson regretted he served in the U.S. Army rather than the Israeli military

Trump Megadonor Sheldon Adelson Got $1.2 Billion Richer This Week, In Part Thanks To A Trump Tweet