You Are Here: Home → The Fall of Eliot Engel: Israel-Firster Defeated in Congressional Primary

The Fall of Eliot Engel: Israel-Firster Defeated in Congressional Primary 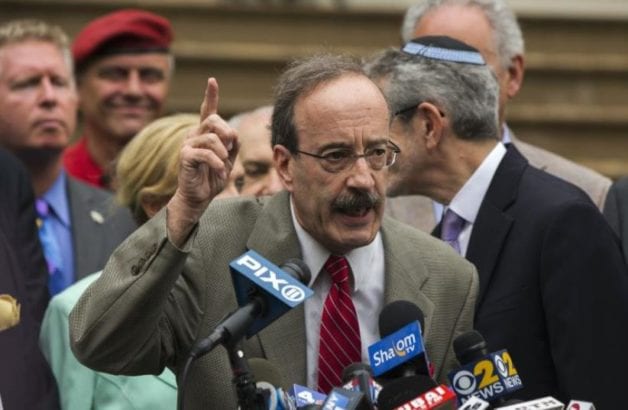 It is early days to be hopeful, but the New York primary election results, coming as they do from a state where Jewish groups wield enormous power, just might be an indication that some things are about to change…

The reality, according to the New York Times tally of the results that morning was that Bowman had beaten Engel by a margin to 60.9% versus 35.6% with more than 82% of votes counted. Even though it posted the numbers, the Times felt compelled to describe the apparently impending lopsided loss as if it were something less than that, as a “stiff challenge” for Engel.

The media deference to Engel derives from the fact that he is a protected species, possibly the leading Israel-firster in Congress.

In 2003, Engel supported the invasion of Iraq and in the following year he organized a group of fellow congressmen to demand cuts in the U.S. contribution to the United Nations office that assists Palestinian refugees. He attended the infamous Israeli Prime Minister Benjamin Netanyahu address to Congress in 2015 that many other Democratic lawmakers boycotted due to the insult to President Obama and afterwards called Netanyahu’s speech “compelling.”

Hillary Clinton, Chuck Schumer, Andrew Cuomo and Nancy Pelosi all had endorsed Engel, who has been in Congress for going on 32 years and currently heads the House Foreign Affairs Committee. Clinton explained that Engel “…is deeply committed to working with our allies to maintain American leadership on the global stage.” She was, of course, referring to Israel.

Engel was also endorsed by the Congressional Black Caucus even though Bowman is black, a demonstration of how politics in Washington works.

[CBC members are listed here. They include Corey Booker and Kamala Harris, consistent voices for the Israel lobby. Analyst Jeffrey Blankfort writes that the Caucus has long been in the Israel lobby’s pocket.]

Engel will in any event likely be replaced to chair the Foreign Affairs committee by a similar Jewish Israel-firster Brad Sherman of California, but his imminent defeat has already sent a shockwave through the centers of pro-Israel power in the United States.

Bowman, a progressive “Justice Democrat,” is on record as favoring cuts in aid for Israel based on its human rights record. He has attacked Engel for being on the dole financially from defense contractors and also for being an active promoter of a military attack on Iran, even though the Iranians pose no threat to the United States.

He has, in fact, made Israel something of an issue in his campaign, pointing out that Engel had been one of the few Democratic members of the House of Representatives to vote against President Barack Obama’s Joint Comprehensive Plan of Action (JCPOA) in 2015. The JCPOA was the major foreign policy achievement of the Obama Administration and it set up a framework to prevent Iran from taking steps to produce a nuclear weapon. It was strongly opposed by Israel and its American lobby even though the agreement enhanced U.S. national security.

Engel often in his career has boasted about his close relationship with Israel.

Speaking at the 2018 national convention of the American Israel Public Affairs Committee (AIPAC), the U.S.’s principal Israeli lobby, Engel boasted: “There’s a bunch of legislation coming out of the Foreign Affairs Committee. I want to tell you that I sit down with AIPAC on every piece of legislation that comes out. I think it’s very, very important.

In the past 30 years I have attended 31 consecutive AIPAC conferences in March, I haven’t missed one.” Some might suggest that serving in one country’s legislature and working for the interests of another country amounts to treason.

The other good news coming out of New York was that Alexandria Ocasio-Cortez won her district with 72.6% of the vote. AOC, controversial to be sure but no friend of the Israel Lobby, was running against Michelle Caruso-Cabrera, a CNBC reporter.

As is often the case, there is considerable back story to the two races and that back story is Jewish establishment money, lots of it, intended to re-elect Engel and get rid of Ocasio-Cortez. Engel received more than $1.5 million from one group alone, the so-called Democratic Majority for Israel and also obtained large sums bundled by the AIPAC-tied group Pro-Israel America as well as from other Jewish groups. AOC was opposed by the not surprisingly well-funded Caruso-Cabrera, whose money largely came from pro-Israel and Jewish affiliated organizations

And more bad news appears to be coming for the Israel lobby from the Hudson Valley district currently held by yet another Israel-first congresswoman Representative Nita Lowey, who is retiring. Mondaire Jones, a gay Harvard-educated lawyer, has the lead based on early returns. Jones calls himself a progressive and he is unlikely to emerge as a cheerleader for Israel if he is elected. [Editor’s note: However, Jones emphasized his support for Israel in an interview with Jewish Insider.]

Representing parts of Queens, Brooklyn and Manhattan in New York City, Carolyn Maloney, who chairs the Oversight and Reform Committee, is meanwhile maintaining a small lead over Democratic challenger Suraj Patel. Maloney describes herself on her website as a strong supporter of Israel and Jewish issues.

In fact, she goes far beyond that, actively sponsoring and otherwise promoting legislation favorable to Israel and the Jewish community, most recently being the sponsor of the waste of taxpayer money in promoting the holocaust myth through H.R.943, the Never Again Education Act.

Maloney is hanging on to a slim lead against Patel, though numerous postal and absentee votes have not yet been counted and the outcome could go either way. Nevertheless, it is undoubtedly a shock to the Israel Lobby that a completely reliable Maloney might be in danger of losing her seat.

To be sure, Congress continues to be Israeli occupied territory, as Pat Buchanan once put it.

Last week 116 out of 198 Republican congressmen signed a letter to President Donald Trump asserting their support for Israel’s annexation of much of the West Bank, due to start shortly. The letter stated that the annexation was justified “based on the critical premise that Israel should never be forced to compromise its security,” indicating very clearly that actual U.S. national interests had nothing to do with it.

What is surprising about the Republican letter is that it was not unanimous, and the loss of Engel, replacement of Lowey and possible defeat of Maloney could be indications of a real shift among voters regarding what has been an assiduously cultivated overwhelmingly positive view of the Jewish State. Recent opinion polls suggest that a majority of Americans do not support either Israeli expansion or its form of apartheid.

Israel is feeling somewhat vulnerable. Its Lobby stalwarts in the media and in politics are working hard to disengage the current anti-racism turmoil in the U.S. from any mention of Israel, which trained American police in their “anti-terror” tactics.

The Jewish state also practices a far more virulent and brutal racism than anything prevailing in America, something that is becoming increasingly clear to the public. It is early days to be hopeful, but the New York primary election results, coming as they do from a state where Jewish groups wield enormous power, just might be an indication that some things are about to change.