You Are Here: Home → Israel Leverages Dubious ‘Nuclear Archives’ to Re-Enlist IAEA in Campaign Against Iran 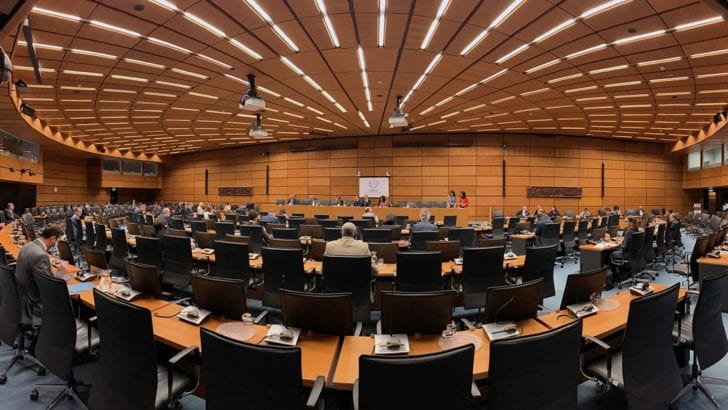 IAEA Board of Governors meeting at IAEA headquarters in Vienna, June 19, 2020. (D. Calma/IAEA)

The International Atomic Energy Agency has once again lent itself to the political interests of Israel, writes Gareth Porter.

The approval by the board of the International Atomic Energy Agency (IAEA) of a June 19 resolution calling on Iran to comply fully with agency demands for cooperation marks a new stage in the long-running Israeli campaign to isolate Iran over alleged covert nuclear weapons activities.

The IAEA has demanded that Iran provide “clarifications” regarding “possible undeclared nuclear material and nuclear-related activities,” as well as access to two sites in question.

Those demands are based on alleged Iranian documents that Israeli intelligence supposedly stole from Iran in 2018. And as The Grayzone has previously reported, their authenticity is highly questionable, and their purported theft may have never occurred.

Israeli Pressure with US Help

The latest phase of the Iran crisis erupted in June 2018, when the Israeli government informed the IAEA that its intelligence services had discovered a new “secret atomic warehouse” in the Turquzabad district of Tehran.

Amano pushed back publicly against the Israeli pressure in October 2018, asserting his independence from Netanyahu’s agenda. Under his watch, the IAEA also failed to accede to Israel’s demand to publicize documents from the “archive” they had provided.

When Brian Hook, a neoconservative operative serving as the U.S. State Department’s lead official on isolating Iran, visited Israel in November 2018, the Israeli Foreign Ministry’s political director told him his government was furious with the IAEA for failing to take the documents seriously.

Hook assured the Israelis that the Donald Trump administration would apply pressure on the IAEA to take action. He assigned the new U.S. ambassador to the IAEA, a protege of John Bolton named Jackie Walcott, as his point person.

In January 2019, as an apparent result of the pressure campaign, the IAEA asked Iran to visit the warehouse that Netanyahu had identified, in order to take environmental samples. Iran agreed, suggesting that Iranian officials did not believe the agency would find anything supporting the Israeli allegations.

Months later, laboratory results showed the presence of what the IAEA called “natural uranium particles of anthropogenic origin.” That meant that the particles had been subject to a process of uranium conversion but not enrichment. The most likely explanation for the finding was that a part of retired equipment or other material that had been used in Iran’s fully monitored uranium conversion program had ended up in that warehouse.

The logical next step for the IAEA at that point would have been to have to request visits to sites where Iran’s declared conversion program has operated so the results could be compared with those of the samples found at the warehouse. That was what precisely Iran proposed to the agency in January 2020. The IAEA did carry out the sampling, but the laboratory tests on those samples are not yet available.

While the IAEA stalled on requesting environmental samples from the declared uranium conversion sites for several months, when it would have made the most sense to do so, the Israeli government exploited the lab results to resume its political offensive against Iran.

With backing from the U.S., Israel pushed a dubious argument that particles of natural uranium confirmed their claim that Iran had run an undeclared program to process natural uranium for use in covert nuclear weapons-related testing.

This Israeli lobbying coincided with the first phase of a transition within the IAEA that would ultimately advance Tel Aviv’s position. Director General Yukio Amano underwent an unspecified medical procedure in September 2018, grew steadily weaker with a serious illness, and died on July 2, 2019.

Before his physical decline, Amano had announced plans to step down by March 2020, touching off a competition between senior IAEA officials for election to the top position. U.S. and Israeli influence was immediately enhanced by the race, because any interested candidate required substantial backing from Washington for the requisite votes among the agency’s board of directors.

The Israelis had focused the IAEA’s attention on an alleged Iranian overt conversion program from the very beginning. Drawn from a covert program that took place from 2000 to 2003, the collection of supposedly purloined documents included a one-page flow sheet showing a process for converting uranium ore into a form of uranium that could be enriched.

But in its December 2015 “final assessment” of questions of “possible military dimensions,” the IAEA had concluded that the process shown in the document “was technically flawed and of low quality in comparison to what was available to Iran as part of its declared nuclear fuel cycle.” In other words, it wasn’t taken very seriously.

Netanyahu’s new “Iranian Nuclear Archive” included what was purported to be a May 2003 letter from the “project manager” of the “Health and Safety Group” for that same alleged covert nuclear weapons program.

The letter described a large covert uranium conversion plant and three plant designs.  But the letter bore no marking that connected it with any Iranian government entity — only a crudely drawn symbol that could have been added by anyone. 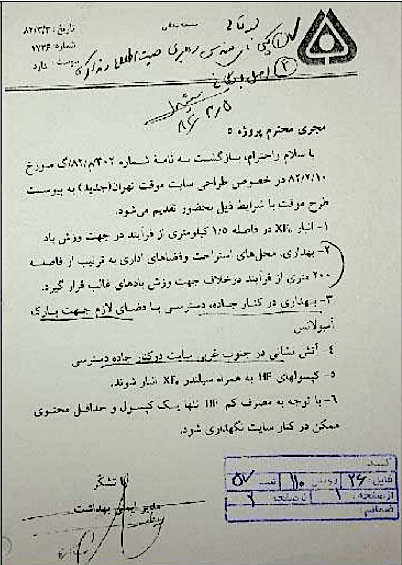 What’s more, nothing about the facility designs supported the document’s authenticity, especially considering a senior Israeli intelligence official acknowledged to pro-Israel lobbyist David Albright that no such plant was ever built.

Israel, nevertheless, continued to deploy those dubious documents to hammer home its point.

IAEA Caves to Israel & US

The documents and photos the Israelis pushed with U.S. support eventually prompted the IAEA to cave in to their demands. The agency sent three letters to Iran on July 5, Aug. 9, and Aug. 21, 2019, based entirely on the Israeli claims about three “undeclared sites.”

In the missives, the IAEA claimed to have “detailed information” about what it called “possible undeclared nuclear material and nuclear-related activities” at each of site. It demanded “clarifications” in each case.

According to the IAEA, the first letter related to the “possible presence” between 2002 and 2003 of a natural uranium metal disc which it said “may not have been included in Iran’s declarations.” The letter was clearly referring to Lavisan-Shian in Tehran, when it said the site “underwent extensive sanitation and leveling in 2003 and 2004.” At the time, the agency decided there was no point in visiting it.

The United States and Israel have always argued that Iran had completely removed the topsoil at the site in order to avoid detection by environmental sampling of some kind of nuclear-related work at the site. But that claim was false. In fact, the buildings belonging to the military contractor of Lavisan-Shian had been torn down, but topsoil remained.

The IAEA did undertake environmental sampling of the site in June 2004, acknowledging that the vegetation and soil samples collected at Lavisan-Shian revealed no evidence of nuclear material. Reuters reported at the time that an IAEA official had said that “on-site inspections of Lavizan produced no proof that any soil had been removed at all.”

In its July 5 letter, the IAEA demanded to know whether an undeclared natural uranium metal disc had been present at the site and, if so, where it was located. That question was clearly based on a slide in the Israeli collection that Albright’s organization has described as summarizing how to make uranium deuteride, which has been used to create a neutral initiator for a nuclear explosion, with uranium metal chips and deuterium gas.

The second site, which has not been otherwise identified, “may have been used for the processing and conversion of uranium ore including fluorination in 2003,” according to the IAEA letter. It said the site “underwent significant changes in 2004, including the demolition of most buildings,” as though that constituted evidence of wrongdoing.

The claim made little sense given that, in April 2003, Iran had formally declared to the IAEA that it was opening lines at its Esfahan nuclear technology center for production of natural uranium metal for use in the production of shielding material.

At the third site, the IAEA stated, “outdoor conventional explosive testing may have taken place in 2003” on “shielding” for use with “neutron detectors.” As part of the rationale for demanding clarification, the agency cited supposed efforts beginning in July 2019 to “sanitize part of the location.” This language was designed to imply that evidence of wrongdoing had been removed from the Iranian site.

We know that the site in question was near Abadeh, because Netanyahu showed satellite photos of the Abadeh site in June 2019 and again in late July of this year, when a set of buildings had been removed by the latter date. Netanyahu bragged that he was revealing “yet another secret nuclear site…exposed in the archives.”

However, IAEA wording suggested its letter was prompted not by any concrete evidence of nuclear activity at the Abadeh site, but by some evidence of the destruction of those buildings.

The IAEA thus chose the three sites based on nothing more than the fact that buildings were razed, and thanks to pressure applied by the Israelis and the United States. The notion that Iran “may have” used and stored undeclared nuclear material at undeclared site, moreover, was based solely on unvetted Israeli documents, contrary to the IAEA claim of “extensive and rigorous corroboration process.”

In provoking a needless crisis over obscure hypotheticals, the IAEA has once again lent itself to the political interests of Washington and Tel Aviv – just as it did during the Bush and Obama administrations. But this time the IAEA’s highly politicized campaign is serving the Israeli aim of making it politically impossible for the next administration to return to the Iran nuclear deal.

On June 8, Iran’s permanent mission to the IAEA demanded that any request for clarification under the additional protocol should be based on “authenticated information” and expressed “concern” over attempts to “reopen outstanding issues” that had been closed in 2015.

Iran views the new IAEA exercise as yet another salient of the U.S,-Israeli “maximum pressure” strategy. Tehran has thus insisted that the IAEA cease its role as a de facto prosecutor for the U.S.-Israeli special relationship.

Gareth Porter is an independent investigative journalist who has covered national security policy since 2005 and was the recipient of Gellhorn Prize for Journalism in 2012.  His most recent book is “The CIA Insider’s Guide” to the Iran Crisis co-authored with John Kiriakou, published in February.