You Are Here: Home → Thanks to the US, the Israeli Military Shot My Cousin, Harun Abu Aram

Thanks to the US, the Israeli Military Shot My Cousin, Harun Abu Aram 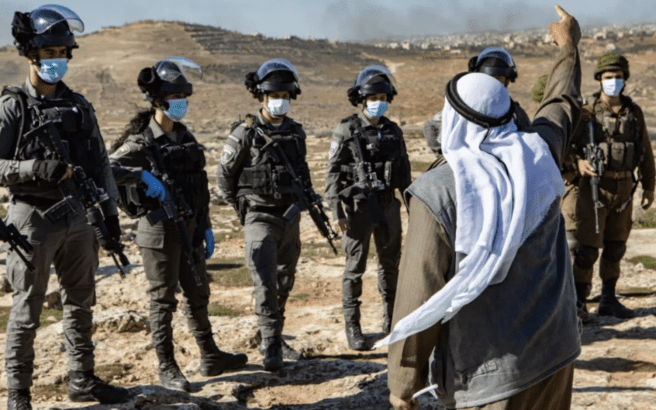 On Jan. 8, 2021, one week after the shooting of Harun Abu Aram by an Israeli soldier, hundreds of Palestinian, Israeli, and international activists gathered for a demonstration at the location of the shooting in the village of Al-Rakeez in the South Hebron Hills. They were met by Israeli police and military.

Americans, if you think the Palestinian issue is unrelated to you, think again: Israeli violence is being perpetrated in your name, with money that should be spent to make your lives better (due to the influence of the Israel lobby on US policies)

‘While Congress refuses to pass a living wage, it continues to supply Israel with copious amounts of military aid, which the country then uses to harm my family.’

by Ryah Aqel with Mohammed El-Kurd, reposted from The Nation, March 2, 2021

January 1, 2021. My aunt Rasmiya Mohammad, 75, began her year with the news that her grandson, my cousin Harun Abu Aram, had been seriously wounded during an Israeli army raid in the Tiwani village in the South Hebron Hills. It was his birthday, and he was turning 24.

A few hours later, and more than 5,550 miles away, I started my morning in Brooklyn by calling my mother, Rasmiya’s younger sister. I wanted to wish her a happy 2021 and share my hope that this year would be more kind to all of us. Instead, she asked, “Did you see what happened to Harun?” I didn’t need to look far to find out, as footage of Israeli apartheid forces, backed by US money and might, shooting Harun in the neck at point-blank range flooded Facebook groups in Yatta, Palestine.

I have always refused to watch videos of violence against Palestinians. But watching the scene unfold on the screen of my phone was the only way to learn what had happened to Harun.

Harun Abu Aram was shot while rebuilding a friend’s barn that had been demolished by the Israeli authorities. His own family home was demolished in mid-November, but this made no headlines, as Israeli dispossession of Palestinians is common across historic Palestine. The army had come to seize the family’s construction material, a tactic Israeli authorities use when they cannot legally stop construction from going forward.

A fight ensued when Harun refused to give up the battered generator the Israelis were trying to confiscate. A soldier beat him to the ground and shot him into permanent paralysis. Harun’s parents were eyewitnesses.

In the video of the attack, Harun’s mother, Shamia, and father, Rasmi, can be heard screaming his name as soon as the shot is fired. It is clear from the sound of their voices that they believe their son has been killed. Then the soldiers flee the scene, and Harun’s friends and family frantically call for a car to transport Harun to a local medical clinic. An ambulance arrives and takes them to the hospital in Yatta and then again to Al-Ahly hospital in Hebron, where he is connected to life support.

Since then, Harun’s parents and grandmother have sat by his hospital bed, day after day, confronting yet another loss. Their lives have been pummeled by loss, one young man taken after another, one family member brutalized after the next.

Harun Abu Aram was not the first

In 1986, the Israeli army shot Rasmiya’s brother, my uncle, Ziad. He survived but was hospitalized for half a year and left with permanent damage to his larynx.

Fourteen years later, in July 2000, Rasmiya’s son and Rasmi’s brother, Khalil, was killed. He was just 14, cut down by an unexploded bomb that had been left behind by the Israeli occupation forces in the family’s own grazing land in the village of Jinba. I was 11 at the time and had just returned with my family to Yatta from a wedding in Amman.

We reached home at 3 AM only to awake a few hours later to the news that Khalil had been killed. I remember riding in my uncle’s jeep that day to be with my grieving aunt. As we drove, my eyes scanned the rocky ground beneath the vehicle, wondering if we, too, would run over something that could kill us.

Years later, my aunt Rasmiya still recalls Khalil asking for new socks that morning. She tells me the story with visceral clarity. He left her after eating the breakfast she had prepared for him in the early hours of the day. She tells me she never saw his body before they buried him.

And now, Rasmiya’s grandson, and my cousin, Harun Abu Aram, lies in a hospital. Before his life was robbed from him, Harun was always willing to lend a helping hand, despite his own long working hours and the difficulties he and his family have endured. Even on his most difficult days, the first thing he would do when entering a room was kiss his grandmother’s hand.

The day he was shot, Harun had so much to look forward to. It was his birthday, and he was engaged to be married.

Today, Harun is paralyzed and breathing through a ventilator. While we do not know what precisely his future will hold, we do know that he will not be the last among us to suffer harm from Israel’s military forces. In fact, it’s already happened. Just a few days after Harun was assaulted, another family member, Mohammad Yousef, 17, lost his hand while attempting to remove unexploded Israeli ordnance from the village land.

Is this what Americans want?

If you are reading this from the safety of the United States, the South Hebron Hills likely feel far and foreign, as if the area and its hardship—as if Harun and his suffering—hold no relevance or connection to your daily life. But there is a connection, and it’s an intimate one: US taxpayers bear direct responsibility for the terror that looms over Palestinian families thanks to this country’s robust sponsorship of Israel’s settler-colonial regime.

The United States sends Israel an annual gift of $3.8 billion in military aid, making it the largest recipient of US military funding in the world. US taxpayers’ dollars go directly towards the dispossession and ethnic cleansing of Palestinians from all parts of Palestine.

In the Masafer Yatta area of the South Hebron Hills, US-funded attacks have occurred for decades. Much of the area was declared an Israeli military zone in 1986, even though Palestinians legally own the land (or, rather, because Palestinians legally own the land). This practice enables Israel to declare Palestinian land off-limits to all but the Israeli military and those with permits issued by the Israeli authorities. The result is that indigenous residents of these so-called military zones are severed from their own lands and face prosecution if they resist such declarations.

Israeli occupation forces now conduct military training dangerously close to the villagers’ homes. It is disturbingly common to find remnants of US-made ammunition, be it bullets or tank shells, in the hills. In fact, schools in the South Hebron Hills are required to teach children how to distinguish between leftover weapons and debris.

Residents of Masafer Yatta are the target of constant raids, arrests, settler violence, land seizures, and home demolitions. It is understood among the people of the area that these obstacles are thrown in their way to terrorize them into leaving. Declaring their lands as military zones is merely one of the many ways the occupation continues to annex Palestinian land. Despite this, the families won’t leave. “They destroy, we build,” Rasmiya always says.

The US government continues to enable this kind of brutality by funneling money to the occupation, even as the American working class struggles to survive in the face of a pandemic, increasing poverty, unemployment, and a homelessness epidemic. Since the beginning of the coronavirus crisis, some 800,000 Americans have applied for unemployment benefits every week. And nearly 11 million Americans will lose unemployment benefits in April if Congress does not pass another Covid-19 relief package soon—just as the CDC-issued moratorium on rental evictions will end.

Meanwhile, the relief bill Congress did manage to agree to last December, while a necessary stopgap, was also widely agreed to be too small. Nonetheless, the bill managed to set aside $3.3 billion in “security assistance” for the Israeli regime and $500 million for US-Israeli missile defense cooperation.

This bizarre prioritizing isn’t unprecedented for the United States. While the US economy was crumbling during the 2008 financial crisis, Washington continued to funnel American dollars to Israel. As of November 2020, Israel has received $146 billion of US taxpayers’ money.

There’s little reason to hope that such fund allocation will change with Joe Biden at the helm of the US empire. Biden has a long history of unapologetically supporting the occupiers of Palestine: During a Senate hearing in 1986, Biden argued that aid to the Israeli military is “the best $3 billion investment we make.” He added, “It’s about time we stop apologizing for our support for Israel, there’s no apology to be made.”

Some 30 years later, in 2016, he doubled down on these comments, saying, “Were there not an Israel, the United States would have to go out and invent an Israel.” In July 2019, he declared his commitment to “sustaining our iron-clad commitment to Israel’s security regardless of how much you may disagree with this present leader.”

Now, as president, Biden looks set to continue a long tradition of US foreign policy. Unconditional and unwavering support for Washington’s self-proclaimed primary ally in the Middle East is the one foreign policy imperative that has been virtually unchanged across US administrations since the Nakba, how Palestinians refer to their formal removal, dispossession, and exile since 1948.

The United States is yet again on the wrong side of history. But the American people can and should object to this increasing careless spending by their government—not only for the sake of the Palestinians but for their own sake. Money currently used to fund Israeli violence should fund health care, safe and accessible water, and a $15 minimum wage, which is truly the bare minimum.

Since Biden’s infamous endorsement of US support for Israeli apartheid at that 1986 Senate hearing, Rasmiya has lost her son, nearly lost her youngest brother, and now her grandson. Harun’s life hangs in the in-between, merely for refusing to give up what’s his. If US sponsorship of this state terror continues, then Rasmiya, and all Palestinians, will ultimately lose what remains—of their families, their homes, and their land.

The world should not wait for the United States to find its moral compass, or for Palestine to drown completely in colonialism, to determine its relationship with Israeli apartheid.

Ryah Aqel is a filmmaker and creator based in Michigan and New York. She holds an MA from New York University, where she researched her family’s decades-long battle to remain on their land in the South Hebron Hills.

Mohammed El-Kurd is a writer from Jerusalem, occupied Palestine, currently living in New York. He writes primarily about dispossession in Jerusalem and colonization in Palestine. His debut book, RIFQA (Haymarket Books), will be released in winter 2021.