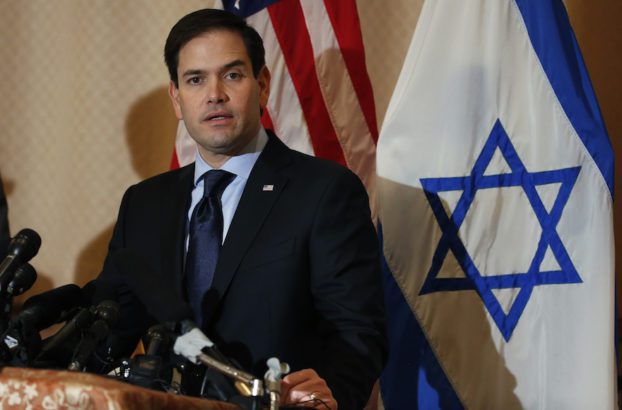 Marco Rubio’s latest legislation would tie the hands of corporate officers who seek to stand for justice and equality by guiding their companies through a boycott of Israel.

US Senator Marco Rubio (R-FL) has introduced a bill, the Mind Your Own Business Act (S.2829), that would hold corporate officers personally liable when actions they take on behalf of the corporation are considered political, “un-American,” or in some other way not in the best interests of the shareholders.

Among other things, Mind Your Own Business would hold corporate officers personally liable for the act of “boycotting a state” – undermining their freedom to boycott Israel over its endemic human rights abuses. This is in spite of the fact that Americans in general are very supportive of boycotts: only about 1 in 5 agree with the anti-BDS legislation of the type that Rubio and others (including many Democrats) have been trying to pass. The BDS movement (boycott, divest, and sanctions) is based on “the simple principle that Palestinians are entitled to the same rights as the rest of humanity.”

The practice of boycott in the 1990s was instrumental in the toppling of apartheid in South Africa, and is a growing movement today. Numerous experts have documented Israel’s profoundly discriminatory system, which amounts to apartheid.

The BDS Movement has declared that “states have a legal responsibility to end complicity and dismantle apartheid” in Israel; all over the US, universities, local governments, and unions are considering BDS actions.

Israel maintains its apartheid regime due to complicity of govs across the world, through arms trade, business & political support.

Interestingly, while laws in 32 states forbid the boycotting of Israeli companies, these same states are in favor of boycotting under different circumstances.

That is, businesses (and in some cases, individuals) that participate in boycotts of Israel are often themselves boycotted. The difference is simply that in the first case, the action is taken on moral grounds (for example, in protest of Israel’s human rights abuses against Palestinians); the second is merely punishment for the entity’s exercise of free speech.

Supporting Israel is damaging to Americans on many levels.

In addition to providing arms to a country that abuses human rights (and that in turns provides arms to other human rights abusers), the US has lost respect globally for its complicity; foreign agents are controlling much of our country’s foreign policy; pro-Israel donors hold many politicians hostage; and American freedoms are being eroded in the name of protecting Israel from criticism. Israel also often spies on Americans and steals our technology.

Sen. Rubio himself, like many other senators, refuses to take responsibility for his actions in Congress that are not in the best interest of his constituents: his support for Israel (and Israel partisans’ support for him) is well-known; Rubio has prioritized Israel over his own country, and worked against American free speech.

Only a quarter of Americans consider themselves Zionists, yet the vast majority of our Congress members vote pro-Israel.

In addition, Americans are increasingly in favor of limiting and/or conditioning aid to Israel, while the majority of our legislators are willing to send Israel $10 million a day (and much more besides) with no strings attached – even though we have laws that prohibit such aid to countries that commit large-scale human rights abuses.

This would suggest that perhaps these Congress members – not corporations wanting to boycott Israel – may be acting in an un-American way, not according our best interests.

Our Congress is failing its shareholders.