You Are Here: Home → New GOP bill would keep illegal settlement products labeled ‘Made in Israel’ 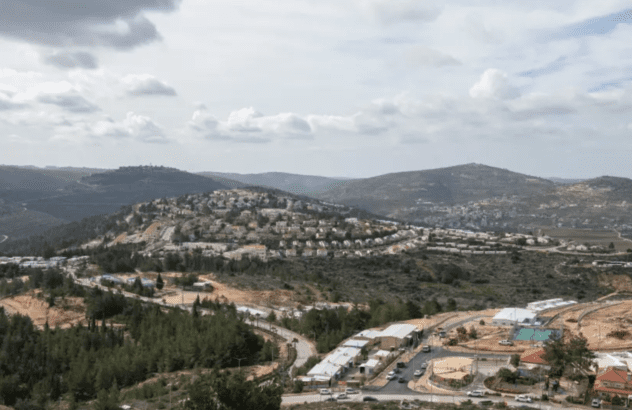 Israeli settlements, where products are made and marketed as “Made in Israel,” are illegally built on Palestinian land. (Pictured: view of the Jewish settlement of Eli, in the West Bank on January 17, 2021.)

Pro-Israel congress members argue that returning to the pre-Pompeo policy, labelling settlement-made products “Made in West Bank,” would empower those who seek to boycott the Jewish state. In reality, the products are made in the West Bank – on land stolen from Palestinians.

by Lahav Harkov, reposted from the Jerusalem Post, September 23, 2021

[NOTE: this is an article from an Israeli newspaper considered “centrist.” Where its narrative fails to include relevant facts, we have inserted the missing information in italics.]

New legislation by Republicans in the US House of Representatives seeks to reinforce the Trump-era instruction to label products of Judea and Samaria “Made in Israel.” [“Judea and Samaria” is the whitewashed nickname for the Palestinian West Bank, the majority of which (82%) is partially or fully controlled by Israel and de facto annexed by Israel – in violation of international law.]

Rep. Claudia Tenney (R-New York), a member of the House Foreign Affairs Committee, was set to introduce what she called the Anti-BDS Labeling Act on Thursday, meant to stop the Biden administration from reversing the instruction from former US secretary of state Mike Pompeo in the final months of the Trump administration.

Pompeo’s November 2020 decision reversed a guideline from the Clinton administration in 1995 that settlement goods must be labeled “Made in the West Bank.” That was not enforced until 2016, when the Obama administration republished those guidelines, warning that violators could incur fines.

[The Trump labelling policy is dangerous as part of Israel’s greater strategy to take over Palestinian land – as Salam Fayyad, former prime minister of the Palestinian Authority, explained,  – its “colonial expansionism and relentlessly oppressive occupation. And it is even about more than merely considering most of the West Bank as part of Israel; it is also about completely eliminating the possibility of any meaningful statehood for the Palestinians on the territory Israel occupied in 1967.”]

US law states that every article of foreign origin imported into the US must be marked with its country of origin unless an exception is provided by law. Though decisions about settlement labeling have been made by the executive branch in recent decades, Congress has the authority to pass laws regarding foreign commerce.

Tenney argued that returning to the pre-Pompeo policy would empower those who seek to boycott Israel. Labeling Israeli products from Judea and Samaria differently from other products makes it easier to seek them out for boycott.

“The Boycott, Divestment, and Sanctions [BDS] movement is fueling antisemitism in the United States and around the world,” she stated. “The United States must remain steadfast in our support for Israel, which is why I introduced this bill. My legislation defends the integrity of the Jewish state and prohibits the Biden administration from targeting specific goods made in Israel by banning ‘Made in Israel’ country-of-origin labels.”

[Actually the BDS movement is focused on human rights for Palestinians, and opposes antisemitism of any kind. These types of baseless charges are common among Israel partisans.]

Earlier this year, The National, based in Abu Dhabi, reported on a leaked memo of the Biden administration’s plans in relation to the Israeli-Palestinian conflict, which included reversing the labeling decision, but they have yet to announce any changes. The US Embassy in Israel’s spokesperson said, “We have no changes to announce to the current guidelines on country of origin markings.”

Tenney accused the Biden administration of not being able to “stand firm against radical activists.”

[Actually, BDS and Palestinian rights are not “radical,” but mainstream and popular.]

She submitted her bill just days after the House Democratic leadership removed funding for Israel’s Iron Dome missile defense system from a bill, because the party’s Left flank refused to support the legislation otherwise. [Read about the removal of Iron Dome funding here] House Democrats introduced a new bill just to fund Iron Dome batteries, which is expected to go to a vote on Thursday.

The Democrats have a majority in Congress, and as such, the anti-BDS bill is unlikely to pass.

The bill’s cosponsors are Republican representatives Lee Zeldin of New York, Ronny Jackson of Texas, Brian Mast of Florida and Joe Wilson of South Carolina, all of whom are members of the House Foreign Affairs Committee. Senators Tom Cotton and John Boozman of Arkansas, Rick Scott and Marco Rubio of Florida, Bill Haggerty and Marsha Blackburn of Tennessee, Ted Cruz of Texas and Thom Tillis of North Carolina were to introduce a companion bill.

Jackson said that were the Biden administration to return to labeling settlement products as “Made in the West Bank,” it would be an antisemitic policy.

[Again, the charge of “antisemitism” is often used inaccurately by Israel partisans – often, as is the case here, to shut down dialogue about the injustice of a policy. Read more here.]

Zeldin expressed concern about a “growing embrace of the BDS movement against Israel and attempted normalization of antisemitic and anti-Israel ideals by private companies, institutions of higher education and political activists.”

“This legislation takes important steps to combat anti-Israel and antisemitic boycotts by protecting American companies from being roped into international boycotts targeting Israel and other US allies, and firmly establishing Congress’ position in opposition to the BDS movement,” he stated.

The recent decision by ice cream company Ben & Jerry’s to boycott settlements [more here] by opting out of renewing its contract with its Israeli licensee has led a number of US states – New Jersey, Florida, Arizona and Texas – to move toward divesting from its parent company Unilever.