You Are Here: Home → Israel to get another billion dollars – Time for an Iron Dome for Palestinians 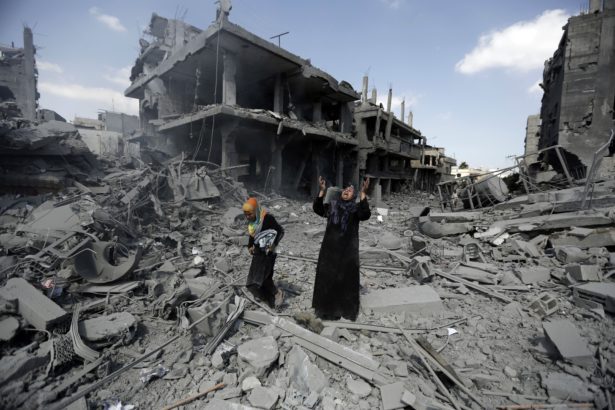 A Palestinian woman pauses amid destroyed buildings in the northern district of Beit Hanun, July 26, 2014. (Ha'aretz)

U.S. politicians just voted another billion dollars to Israel – allegedly to protect civilian lives. If they really wish to save civilian lives, it’s time for our Congress members to introduce legislation for a missile defense system for Palestinians, who are being killed in vastly larger numbers… Use the form below to contact Congress now

The House of Representatives just voted 420-9 in favor of a fast-tracked bill (H.R. 5323) to give Israel an additional $1 billion dollars. The bill is now in the Senate (S.2839), where it is expected to be passed with little or no dissent.

In other words, once again, the vast majority of U.S. politicians from both parties obeyed Israel’s demand that American taxpayers give Israel their hard-earned tax dollars. Keep in mind that this $1 billion is over and above the $3.8 billion – $10.5 million per day – in military aid Israel currently receives from the U.S. Plus, our reps plan to expend an additional $3 billion on behalf of Israel.

This is on top of decades of receiving more U.S. tax money than any other country on earth. On average, Israelis have received 7,000 times more aid from the U.S. per capita than others around the world.

In voting for this latest billion dollars to Israel, members of the Israel lobby were elated at this demonstration of their power. Other Congress people explained that they were supporting the bill because it would ‘save civilian lives’ in Israel. Speaker of the House Nancy Pelosi, for example, said that Iron Dome has “saved thousands of lives.”

Pelosi and the other 408 politicians who voted for the bill didn’t explain why Israel’s numerous billionaires and millionaires shouldn’t pay for this system themselves.

More important, our politicians failed to note that the population whose civilians have been killed in vastly larger numbers are actually Palestinians, including multitudes of children.

The bill that our politicians voted for states that the billion dollars “shall be provided to address emergent requirements in support of Operation Guardian of the Walls.”

The bill leaves out the fact that during this operation Israeli forces killed 260 Gazans, 66 of them children (Palestinian resistance groups killed a total of 13 people in Israel).

Amnesty stated: “There is a horrific pattern emerging of Israel launching airstrikes in Gaza targeting residential buildings and family homes – in some cases entire families were buried beneath the rubble when the building they lived in collapsed.”

And this is typical. Previous “wars” between Israel and Gazans (the large majority of whom are from families that were ethnically cleansed by Israel) have been just as one-sided. Over the years, Israeli airstrikes have killed approximately 4,000 Gazans, while Palestinian rockets have killed a total of 49 people in Israel.

In other words, Iron Dome actually costs lives – It allows Israel to attack and oppress Palestinians time after time, without being constrained by concern that such attacks could lead to retaliation that would endanger Israeli citizens.

It is clear that civilians in Gaza are in desperate need of protection.

Therefore, I suggest that our Congressional representatives who say they are so deeply concerned about civilian deaths now support an Iron Dome-like system for Palestinians.

If any of our Congress members truly care about all human beings, regardless of race, religion, ethnicity, or nationality, they will immediately introduce such a bill.

Anyone who agrees with this can use the form below to contact their Congress members and ask them to introduce such life-saving legislation: