You Are Here: Home → What the Iron Dome Means to Us Palestinians

What the Iron Dome Means to Us Palestinians 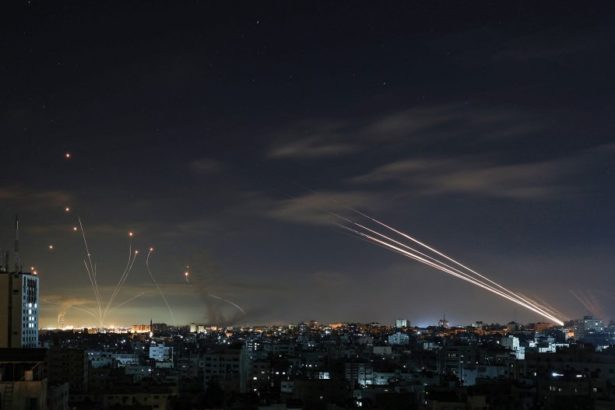 A writer from Gaza reflects on Israel’s “defensive weapon,” Iron Dome: it reminds Palestinians of their own defenselessness and how the world apparently places greater inherent worth on the protection of Israeli lives.

Progressive House Democrats sparked a charged debate after they got their party to remove $1 billion of additional funding to Israel to replenish its Iron Dome from a congressional bill earlier this week. The Iron Dome is a defense missile technology that shoots down rockets, which Israel uses to defend itself from attack.

Some praised the progressives for an act of resistance to the near unquestioned support Israel receives from Congress. Others criticized the push to remove funding for the Iron Dome as wrong, given that it is meant to save Israeli lives. Still others pointed out that Israel, with a GDP of nearly $400 billion, doesn’t need and shouldn’t be receiving such generous amounts of U.S. aid that other countries need more desperately—an argument made last year by Yossi Beilin, former Israeli Minister of Justice, and Daniel Kurtzer, former Ambassador to Israel under President Bush.

The effort to defund the Iron Dome was short-lived; a Thursday vote on an independent bill ensured the funding would go through. But for many of us Palestinians, the effort in and of itself was a victory.

This is not malicious jubilance at the thought that Israel’s protective shield would be disabled so we might attack at free will. Nor was it a premature celebration of a historic shift in U.S. politics vis-à-vis Israel-Palestine. It was crystal clear from the start that successfully taking out that $1 billion from the H.Res.667 bill would not impede a strongly pro-Israel Congress from overwhelmingly voting to provide the Iron Dome funding in another bill—just as it is clear that even if the Iron Dome was entirely defunded by the U.S., Israel would have enough resources to replenish it on its own.

No similar efforts to save Palestinian lives

The Iron Dome saves lives. And saving any life is an infinitely noble goal. But this conflict has two peoples trapped in it, and there are simply no similar efforts to save Palestinian lives and deter fatalities against us. That is what the Iron Dome symbolizes to Palestinians.

And for us, the progressive push to defund the Iron Dome was quite simply a recognition of our pain. It was a symbolic display of solidarity from the progressive wing that is deeply cherished, regardless of the result.

Even when the final outcome doesn’t lead to a tangible change on the ground, making noise about our cause in the U.S. halls of decision-making gives us hope. At a very minimum, it evokes a discussion that brings our grievances back into the spotlight at a time when Israel’s government, the Biden Administration and the world all seem to have moved on.

And while the Iron Dome is a defensive system, to us it represents our own defenselessness. We of course don’t have our own Iron Dome, which means that my home, Gaza, is pummeled every time there is a conflict. And to the child whose home is destroyed and whose father and brothers are killed by an Israeli bomb, it doesn’t really matter who shot the first rocket.

This is why on the Palestinian street, the Iron Dome is often frowned upon, not for what it actually is but for symbolizing the disparity in power between Palestinians and Israel, for being part and parcel of an oppressive apparatus, an integral shield which maintains Israel’s near impunity and allows its government and military to recognize—correctly—that they will always be able to hurt us more than we can hurt them.

They will always be able to raid or demolish Palestinian homes in the West Bank at night and arbitrarily arrest and even sometimes kill civilians. They will always be able to send entire neighborhoods in Gaza “back to the stone age,” as Israel’s current Defense Minister once put it. Even a legal “Iron Dome” like the Palestinian bid at the International Criminal Court to investigate war crimes by Israel and Hamas was heavily demonized and firmly opposed in D.C. and Israel.

That’s why most Palestinians see in the U.S.’s generous funding of the Iron Dome a double standard: While D.C. is hyper-focused on providing endless lines of defense to Israel, be they physical, legal, or political, virtually no effort or even serious discussion is put into saving the lives of Palestinians and defending them against the injustices and abuses we suffer under occupation.

This focus on saving some lives and neglecting others is interpreted by Palestinians as granting Israel a blank check to carry out its occupation and blockade without feeling any consequences whatsoever, beyond the occasional meaningless verbal expressions of concern.

If the message of the Iron Dome is that every life is infinitely precious, it’s a message that is unequally heard, unequally enforced.

Between 2008 and 2020, 5,600 Palestinians and 250 Israelis were killed. Each one of those people has a story. Each of their lives was equally sacred. The loss of each one of them is equally painful to each of their loved ones, and every one of them should have been spared such a fate, dying on the crucible of a political stalemate.

It is morally incumbent on the U.S., as Israel’s closest ally and biggest military donor, to ensure by any means necessary that the number of Israeli and Palestinian casualties over the next decade will be brought to zero.

Otherwise, making no serious effort to save the lives of Palestinians, or even standing in the way of Palestinian pursuit of defense and protection—in international forums, for example—will continue to discredit and delegitimize the U.S. funding for the Iron Dome in the eyes of Palestinians and their supporters.

Muhammad Shehada is a writer and civil society activist from the Gaza Strip and a student of development studies at Lund University, Sweden. He was the PR officer for the Gaza office of the Euro-Med Monitor for Human Rights. He is a columnist at the Forward.

To contact your Congress member about this, go here.