You Are Here: Home → Levy: Netanyahu Isn’t the Problem. The Israeli People Are

Levy: Netanyahu Isn’t the Problem. The Israeli People Are 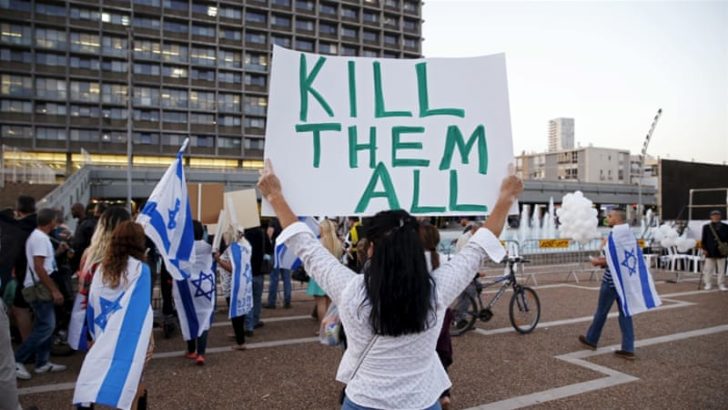 Supporters of an Israeli soldier, Elor Azaria, charged with manslaughter after he shot a wounded Palestinian alleged attacker as he lay on the ground in Hebron in 2016 [Reuters]

“The apartheid did not start with him and will not end with his departure; it probably won’t even be dented. One of the most racist nations in the world cannot complain about its prime minister’s racism.”

It’s not Prime Minister Benjamin Netanyahu, or at least not just him. One cannot blame one person, influential and powerful as he may be, for every evil, as his opponents and enemies do. The racism, extreme nationalism, divisiveness, incitement, hatred, anxiety and corruption is all because of Netanyahu, they say.

But it’s not so. His sins are innumerable and the damage he’s done immeasurable, and it would be great to have him out of our lives, but blaming everything on him is deceiving and a shirking of responsibility.

If Netanyahu is to blame for everything, then if we could just be rid of him, everything will go back to being good. Not so. If Netanyahu is to blame for everything, then we had nothing to do with the current state of affairs. Not so. Netanyahu has caused heavy damage, but behind him there’s a nation and voters and other elected officials, most of them not much different than him, and a public and a society and media outlets. The blame rests with them at least as much, if not more.

There are those who think that after the Holocaust, they are permitted to do anything. There are those who believe that Israel is tops in the world in every field, that international law doesn’t apply to it, and that no one can tell it what to do.

There’s brainwashing to an extent unknown in a democracy. Is Netanyahu responsible for all of this? Come on.

The problem is the atmosphere, the spirit of the times, the values and outlooks that have become ingrained here during decades of Zionism.

Netanyahu did not sow them and they will not be uprooted when he goes. Racism and xenophobia are deeply entrenched here, far more deeply than any Netanyahu. How could this be ascribed to the man on Balfour Street when it began long before he was chosen to be an envoy in Washington?

The apartheid did not start with him and will not end with his departure; it probably won’t even be dented. One of the most racist nations in the world cannot complain about its prime minister’s racism.

When public discourse is dominated by the right, is that because of Netanyahu? When the media is controlled by a single narrative, in which the right becomes the center, is that his fault? How much can one dismiss a people’s wishes, beliefs, values and choices? How can this all be blamed on one politician?

That there is no ideological alternative has nothing to do with Netanyahu.

That the election campaign is dealing only with nonsense is not because of him. That the center-left is afraid to utter a word is not his fault.

Netanyahu is the best thing to ever happen to Israeli politics – you can dump everything on him; he’s an inciter who sows fear and spreads lies, but too many are buying what he’s selling and his opponents are too few. Don’t make him the scapegoat – we are to blame.

The problem is not Netanyahu, but the admiration for him and the vacuum of opposition around him. Incitement is for the weak. If Israelis are so easily swayed by their prime minister, the problem is with them, not with him. Netanyahu, whom people call cynical, directs his poison at places where he knows he’ll be able to spread it easily.

It would be great if some local Nelson Mandela would arise, a brave leader with vision who would change the country’s basic values and lead a revolution. But no such person has been born here, and it’s doubtful he ever will be. I wish Netanyahu would disappear. But don’t say he ruined everything and that once he’s gone all will flourish. Netanyahu is Israel, and Israel is Netanyahu, even if Benny Gantz succeeds him.