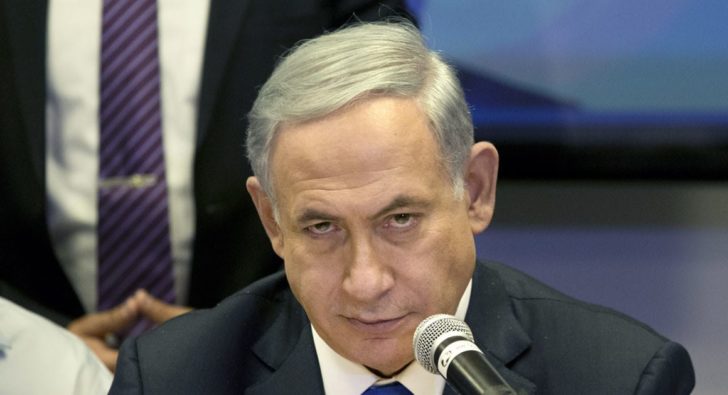 Benjamin Netanyahu has been elected Prime Minister of Israel four times, and hopes to be re-elected next month. Since December 2016 he has been under investigation for corruption scandals; the Israeli attorney general recently announced his intent to file indictments, which would make him the first sitting Israeli prime minister to be charged with a crime.

How is the camel’s back not broken yet?

Fifty years of occupation, twelve years of blockade, 600,000 Israeli settlers, 250 dead unarmed Gazan protesters, three one-sided “wars” in which 3,500 Palestinians in Gaza (and about 150 Israelis) have been killed–that’s not a big enough deal for us to utter a word of reprimand or turn off the financial spigot to Israel.

The US is shelling out $10 million a day, $7,000 a minute in aid–not humanitarian, but military aid, mind you–to a country that last summer passed the openly racist Nation-State Law, that last month saw its prime minister create a coalition including disciples of a Jewish supremacist, that last week disqualified pro-Palestinian parties from even appearing on the election ballot, while welcoming an anti-Palestinian candidate who is a member of a Jewish terror group.

These outrageous acts did not outrage our politicians; Israel’s leaders are emboldened.

Israel for Jews only

Prime Minister Netanyahu went on record over the weekend in defense of that indefensible Nation-State Law.

On Sunday, when a TV personality dared to suggest that “Israel is a state of all its citizens and that all people were created equal,” he felt compelled to respond:

[Arabs in Israel] have equal rights.

(Question: Equal to what? Answer: Equal to the rights of second-class citizens.)

Netanyahu’s next statement completely disassociated the Palestinian people from their own homeland:

The Arab citizens have 22 nation states around them and they do not need another.

This is something you can say when you call those people “Arabs” instead of “Palestinians.” Their centuries of constant connection to this particular land are invisible, irrelevant–all Arabs are the same, all Arab countries are the same. And the “Jewish State” is not for “Arabs” because Israel (which only came into existence a few decades ago) is calling the shots. “Pick an Arab state, any Arab state, and go there. Or if you want to stay in this non-Arab state, you’ve been warned: it’s not your state. It’s ours.”

This is bald-faced racism.

But have no fear! The Anti-Defamation League stepped in.

ADL: the voice of reason?

This anti-Arab rhetoric is a deeply troubling trend that, if continued, could undermine Israel’s vibrant democracy. The representation of Israeli Arabs in the Knesset has historically been a source of pride for Israel, highlighting its democratic character, despite the enduring conflict with its Arab neighbors, and attesting to its genuine efforts to include the Arab community as equal citizens.

It’s not really possible to be a “democracy” or to “include the Arab community as equal citizens” within the context of the Nation-State Law.

And the ADL’s conspicuous inability to use the word “Palestinian” when talking about Palestinians indicates the organization’s place on the Zionist continuum: Palestinian-ness is unthinkable. The very word “Palestinian” recalls non-Jewish historic ties to the land; only the monolithic term “Arab” will do. This puts the ADL only a step away from Netanyahu’s position that 22 “Arab states” is plenty.

ADL has never been an ally of Palestinians. It endorsed the US Embassy move to Jerusalem with all its anti-Palestinian baggage, it supports the Jewish-only “right of return” to the land that most Jews left 2,000 years ago, but Palestinians were exiled from only 70 years ago.

ADL’s language as it scolds Israel’s far-right government demonstrates how similar the two ideologies really are.

Is it time for outrage yet?

The United States–particularly its government–has looked the other way as Israel perpetrated atrocity after atrocity. Will the latest round of blatant racist, anti-Palestinian statements from Israel’s prime minister tip the scales?

Only if American civil society makes some noise. Contact your senator and representative. Tell them to denounce Netanyahu’s racist ideology; remind them that your tax dollars are subsidizing this nonsense.