You Are Here: Home → Israel’s attacks on Gaza bookshops are an attack on Palestinian culture 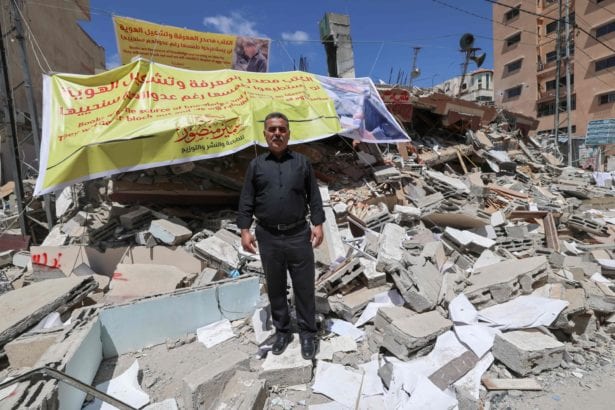 Samir Mansour, Palestinian bookstore and publishing house owner, stands in front of the rubble of his bookshop after it was destroyed by Israeli airstrikes, Gaza City, Palestine, May 22, 2021

Two iconic bookshops in Gaza were destroyed as part of Israel’s attack last week. One of them published Palestinian writers: “It was a way to lift the siege on Gaza through literature.”

Prior to the latest Israeli attacks on Palestine, the country’s inhabitants in the blockaded Gaza Strip had for decades bought books on numerous topics – from school texts to the Quran to Arabic translations of European literary classics – from Samir Mansour Bookstore.

But last Tuesday, owner Samir al-Mansour watched in disbelief as the bookshop and publishing house he had poured his life into was bombarded by an Israeli airstrike and destroyed.

“Forty years of my life were obliterated in less than a second,” said the man in his 50s, a cigarette between his fingers, staring at a mound of concrete, paper and squashed plastic chairs.

Samir Mansour, 53, received a phone call from the military at 6am on Tuesday asking if he was in his shop, about a mile away from him home, NBC reports.

After confirming he was not, the local institution was blown up, reducing a building that once housed “happy and loving memories” to a pile of rubble.

Mr Mansour founded the bookshop in Gaza, which also published stories and books by local authors, 21 years ago.

“The bookstore was like my soul,” Mr Mansour told the news channel. “Books are my life.”

“I have nothing to do with an armed group, a political faction,” Mansour told Agence France-Presse (AFP).

“It’s an attack on culture.”

There are hopes that the Mr Mansour’s bookstore may be rebuilt with donations after an online fundraiser was set up, managed by the non-profit organisation Reprieve.

A post to the bookshop’s Instagram page laments the loss of the sense of community the store offered to people in Gaza. It reads:

What did we lose by losing the library?

We lost the happy and moving memories and situations that our day was not without. We lost the stories and stories that housed the corners, the whispers and wishes of the children who used to come to visit us eager to carry whatever their innocent eyes fell on, for we lost the aged smell of paper and the old thick covers that certain readers are looking for! The smell of coffee that was prepared on a daily basis and incense to welcome you.

We lost the faces of the books, hundreds of thousands of valuable and irreplaceable books, which were not easy to bring into besieged Gaza. We lost the steps of passersby back and forth from students, adults and children. We lost a lot, friends!

Mosaab Abu Toha, a poet and the founder of the Edward Said library established after the Gaza war in 2014, said the Gaza Strip had lost “one of its main cultural resources.”

“Mansour was more than a bookshop,” he said. “It was a publishing house publishing Gazan writers.”

“The books were printed in Egypt – some to come back to Gaza, but others to stay there and be circulated around the Arab world,” Toha said.

“It was a way to lift the siege on Gaza through literature,” he said of the years-long Israeli blockade on the Palestinian territory in place since 2007.

For Gazan readers, the publishing house had printed around 1,000 copies of the works of local authors such as Ghareeb Askalani and Yusri al-Ghoul.

Mansour is not the only book or stationery shop destroyed in the latest Israeli bombing campaign. Gaza’s largest bookshop, owned by Shaban Aslim, was also destroyed by an air strike earlier this week.

Mr Aslim spoke of the work he put into creating his store in an interview with Middle East Eye, saying: “This was my dream. It cost me so much.

“I stayed up long nights. I stopped eating so that I could afford to open the shop,” he said in tears.

“I stopped eating so that I could afford to open the shop.”

The owner of Gaza’s largest bookstore, Shaban Aslim, stands in front of the rubble of his bookstore which was destroyed by an Israeli airstrike. pic.twitter.com/GvG2jkBIzX

Nearby in Gaza, Iqraa was also leveled, and the Al-Nahda stationery and bookshop was reduced to a pile of pulverized cinderblocks.

In front of what remains of Al-Nahda, a poster assured loyal customers it would re-open soon.

A ceasefire was agreed on Thursday after 11 days of attacks, which unleashed the heaviest fighting seen since 2014. Israel’s bombing campaign has killed more than 230 people, including 65 children. Palestinian rockets attacks have killed 12 in Israel.

Palestinians gathered in Gaza’s streets in the early hours of Friday morning, waving flags and setting off fireworks as the ceasefire came into effect at 2am.