You Are Here: Home → Mass arrests of Palestinians in Israel’s Operation Law & Order is “a war declaration” 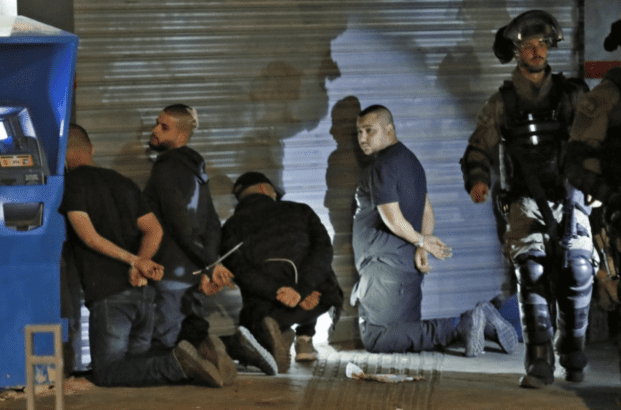 Israeli police say some 1,550 Palestinian citizens of Israel have been arrested since May 9 in “Operation Law and Order,” with many more to come.

Operation Law and Order: Israeli police launch a wave of arrests targeting Palestinian citizens of Israel who rallied in support of Sheikh Jarrah, Al-Aqsa, and Gaza.

Israeli police announced they will arrest hundreds of Palestinian citizens of Israel over the coming days for their participation in recent sit-ins in support of Palestinians in occupied East Jerusalem and the besieged Gaza Strip.

The wave of mass arrests will take place as part of what police called “operation law and order”. It is intended to penalise those who have taken part in demonstrations against settler violence, the Israeli forces’ crackdown on the Al-Aqsa Mosque compound, and the military’s 11-day bombardment campaign of Gaza, which killed 248 people.

In a statement on Sunday night, Israeli police said some 1,550 people have already been arrested since May 9 and the campaign is a “continuation” that aims to “prosecute” demonstrators who have over the past two weeks taken to the streets in towns and cities across Israel.

Thousands of security forces from “all units” will be deployed to carry out raids, it said, in towns and cities predominantly inhabited by Palestinian citizens of Israel, who make up about 20 percent of the country’s population.

The statement did not say the campaign would target Jewish settlers who have attacked Palestinians and their homes, as documented in videos and images widely shared on social media.

Police – including border guards and reserve brigades – will search homes and conduct “investigations” until charges are submitted and prison sentences are imposed, it added.

Hassan Jabareen, the general director of Adalah, the Legal Center for Arab Minority Rights in Israel, declared the campaign a “war” against Palestinian demonstrators, political activists and minors.

The massive arrest operation is a “militarised war against Palestinian citizens of Israel,” Jabareen said in a statement sent to Al Jazeera on Monday, urging a “rapid response” from all Palestinian political movements, parties, and from the High Follow-up Committee for Arab Citizens of Israel.

The purpose of the arrests is to “intimidate and to exact revenge on Palestinian citizens of Israel – ‘to settle the score’ with Palestinians, in the Israeli police’s own words – for their political positions and activities”, he said.

Rallies in cities including Haifa, Yafa, Lydd and Nazareth started earlier this month in solidarity with Palestinian families facing the imminent forced expulsion from their homes in Sheikh Jarrah.

During the sit-ins, several Palestinians were assaulted by Jewish settlers who at times, backed by Israeli police, marched in the streets chanting anti-Palestinian slogans, including “death to Arabs”.

Others were killed as the demonstrations quickly grew following Israeli forces’ attack on worshippers in Al-Aqsa Mosque compound and the subsequent Israeli military assault on Gaza.

On May 10, a Palestinian resident was shot dead by a Jewish settler who was part of a far-right mob. And on May 19, Mohammed Kiwan, 17, succumbed to his wounds after being shot in the head by Israeli police in the town of Umm al-Fahem.

Dozens of others have been arrested with some still awaiting formal charges.

To date, 140 indictments have been brought against 230 people, the majority of whom are Palestinians, including minors, local media reported. They have been charged with assaulting police officers, endangering the lives of citizens in the streets, demonstrating, throwing stones and arson.

In Yafa, Bashar Ali, a 25-year-old university student, was among the 1,550 arrested during the past two weeks.

He was with a group of protesters who suffered beatings and tear gas inhalation after protesting against Israel’s bombardment and continuing siege of Gaza on May 11.

“It was a peaceful sit-in of some 250 people,” Ali said. “Some of us were working on raising funds for those wounded in Jerusalem and Gaza.”

After gathering for nearly two hours at one of Yafa’s community parks, protesters began making their way home at about 6:30pm, but the police blocked the main streets.

“They didn’t want us to go home. Some police officers began assaulting us, I saw them beat an elderly man and a young lady,” Ali recalled.

“We confronted them and that’s when a group of armed policemen gathered and arrested me along with several others,” he added.

Ali was released the following day, but is now under house arrest for one month. He is currently in Kokab, a village in al-Jalil (Galilee), where, according to him, six people were arrested from their homes overnight.

Janan Abdu is a Haifa-based lawyer with the Public Committee Against Torture in Israel who has volunteered to defend imprisoned Palestinians.

“These are not just police forces but also include special units – border police, secret services and undercover forces,” she said of Operation Law and Order.

Abdu said she noticed similarities in the “kind of violations and ill-treatment” these same units used against Palestinians in Jerusalem and the occupied West Bank.

“They treat their citizens as an enemy. There has always been two systems: one for Arabs and one for the Jews,” said Abdu.

“Police have attacked and arrested people recording and documenting the assaults. In some cases, police also collected false evidence from minors during interrogation sessions during detention.”

Meanwhile, Ahmad Tibi, a member of the Israeli parliament with the Joint List, the Palestinian-majority electoral alliance, said Israel did not expect the Palestinian citizens of Israel to rally in support of others in Jerusalem and Gaza.

The “major miscalculation” by Israeli police came even though this is not the first time Palestinian citizens of Israel have rallied against Israeli policies in Jerusalem and other parts of the occupied territories.

In the latest round of sit-ins, police “lost control” inside Israel, Tibi said, describing the latest campaign as a “show” and a bid by Israeli police to assert control at the expense of the Palestinian people.

It is a “miserable attempt to intimidate our youth to stop them from exercising their right to express their opinion”, he said.

“The Israeli police lost their ability to frighten and terrorise the Palestinians. This is why they launched this campaign,” he told Al Jazeera.

More than 500 Palestinian homes are expected to be raided in the next 48 hours, Kayyal said, citing Israeli police and media reports.

“They want to restore this feeling of terror in us, to teach us a lesson. But they also want to disrupt Palestinian unity – which is what this is uprising is all about.”

Meanwhile, calls for action on social media by Palestinians in Israel – who amount to 1.8 million people – have spread with many also describing the announcement as a “declaration of war”.

Palestinian citizens of Israel have long been discriminated against in many aspects of life, including the right to due process.

But according to Kayyal, protests are not enough to stop the cycle of violence.

“We need to start a new chapter as Palestinians inside Israel. We need to rip apart and dismantle Israel’s fragmentation policy [of Palestinians under its control],” he said.

“Our fight as Palestinian citizens of Israel is a part of the collective fight of the Palestinian people against Israel’s settler-colonial project.”