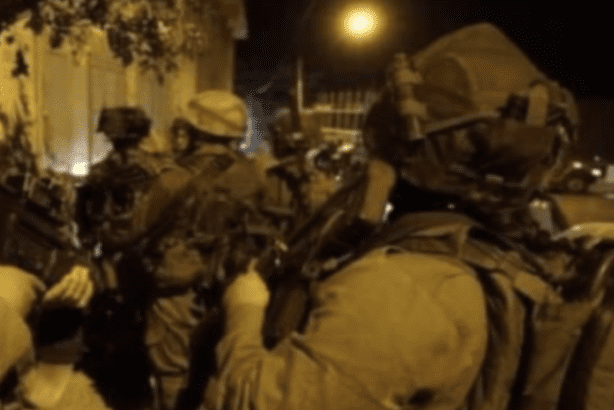 Israeli soldiers invade a West Bank village as part of an ongoing policy of harassment and abduction of Palestinians.

A day after abducting 22 Palestinians around the West Bank, dozens of Israeli soldiers storm more homes and abduct 2 more.

Israeli soldiers invaded, on Sunday evening, the at-Tiwana Palestinian village, south of the southern West Bank city of Hebron, before storming and ransacking homes and assaulting the families, wounding one child, in addition to abducting a father and his son.

Rateb Jabour, the coordinator of the National Committees against the Annexation Wall and Colonies east of Yatta and Southern Hebron, said dozens of soldiers invaded the at-Tiwana village in the Masafer Yatta area, before storming and violently searching Palestinian homes.

Jabour added that the soldiers assaulted families while violently searching their homes, and injured a child, identified as Dima Mohammad Rib’ey, 5, who suffered bruises to her face, especially around the eyes.

The soldiers also abducted Fadel Ahmad Rib’ey, 55, and his son, Bilal, 33, before moving them to a base in the illegal Ma’on colony, which was built on stolen Palestinian lands in the area.

In Salfit, in the central West Bank, the soldiers installed an iron gate on the main road leading to several villages and towns, west of the city.

The gate was installed on the road that leads to Qarawat Bani Hassan, Sarta, Bidya, Masha, az-Zawiya, Rafat, and Deir Ballout.

It is worth mentioning that Israeli soldiers abducted, overnight and on Sunday at dawn, twenty-two Palestinians from their homes, in several parts of the occupied West Bank, including six who were taken prisoner after illegal colonialist settlers and soldiers invaded the courtyards of the Al-Aqsa Mosque in occupied Jerusalem.

In addition, a group of Israeli colonialist settlers, illegally squatting on Palestinian lands, attacked many Palestinians in the Wadi Qana Natural Reservation area, northeast of Salfit, in central West Bank, and injured seven.