You Are Here: Home → Undercover Israeli Soldiers Kill A Palestinian, Bleeds to Death 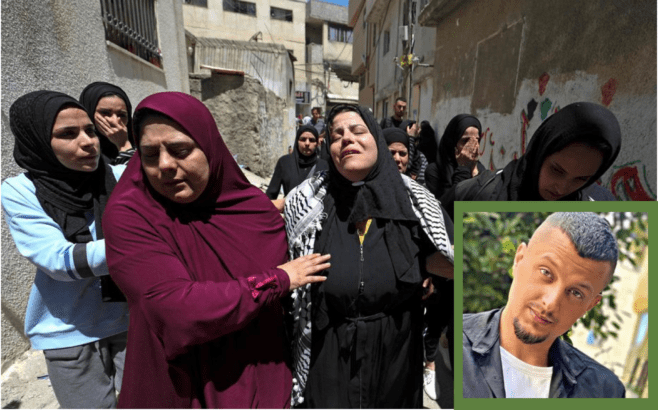 Amid a fragile ceasefire, a young Palestinian man – Ahmed Jamil Fahed – was shot by Israeli undercover forces, then left to bleed to death

Undercover Israeli soldiers infiltrated, on Tuesday at dawn, into Um ash-Sharayet neighborhood in the all-Biereh city, in the central West Bank governorate of Ramallah and al-Biereh, and killed a young man.

Dr. Ahmad al-Betawi, the head of Palestine Medical Complex in Ramallah, told Palestine Radio that the young man has been identified as Ahmad Jamil Fahed, from the al-Am’ari refugee camp, south of al-Biereh city.

Eyewitnesses said the undercover soldiers shot the Palestinian and left him bleeding on the ground without any medical attention until he succumbed to his wounds.

The undercover forces killed the young man after they infiltrated into the area to abduct his brother and his uncle; both are members of the Fateh movement of President Mahmoud Abbas.

On Monday evening, Israeli soldiers shot a child, identified as Nadim Samer Mathloum, 15, after the army invaded the al-Janiya village, west of Ramallah, causing mild wounds to his arm.

Also on Monday evening, undercover Israeli soldiers abducted Khaled Sa’adi and his son Nimir, while working at the Fruits and Vegetables Market, in Barta’a town, southwest of the northern West Bank city of Jenin.