You Are Here: Home → Could Biden Be Impeached for Aiding and Abetting Israeli War Crimes?

Could Biden Be Impeached for Aiding and Abetting Israeli War Crimes? 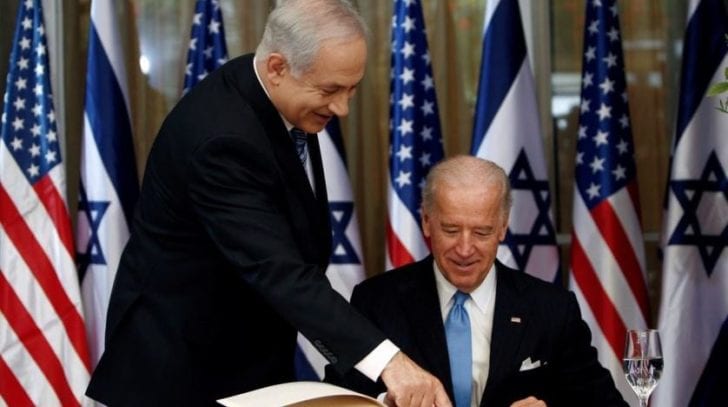 One expert is calling for President Biden to face impeachment over his support for Israel. The Biden administration has green-lighted Israel’s bombing of Gaza, blocked the UN Security Council from addressing Israel’s assault on Gaza, and is now sending more weapons to Israel in violation of international law.

reposted from Institute for Public Accuracy, May 19, 2021

Jewish Currents reports: “AOC to Introduce Resolution Blocking Bomb Sale to Israel.” Groups are urging Sen. Bernie Sanders and other senators to introduce similar resolutions in the Senate, which, unlike the House, would likely force a vote. According to Jewish Insider, Sen. Sanders, Elizabeth Warren and Chris Van Hollen will “introduce a resolution today urging an immediate cease-fire between Israelis and Palestinians.”

[NOTE: below this article are updates on these and other resolutions.]

FRANCIS BOYLE, fboyle@illinois.edu
Boyle is a professor at the University of Illinois College of Law and author of Palestine, Palestinians, and International Law.

He said today: “The Biden administration has repeatedly prevented the United Nations Security Council — which under Article 24 of the United Nations Charter — has ‘primary responsibility for the maintenance of international peace and security’ from addressing the Israeli assault on Gaza.” During the 2014 war, the UN Security Council called for a ceasefire, which the Biden administration has been preventing.

“Biden has repeatedly stated that Israel has the ‘right to defend itself’ — effectively a green light for bombing — rather than demanding an immediate ceasefire and allowing the Security Council to do its job. Israeli Prime Minister Netanyahu has correctly understood Biden’s statements and dismissed Biden’s rhetorical call for ‘de-escalation.’

“There is now rocket fire between Israel and Lebanon. The actions of the Biden administration — a green light to Israel — are now threatening global security.

“Biden has knowingly let U.S. weapons to be used by Israel to commit war crimes in violation of the Fourth Geneva Convention, the U.S. Arms Control Export Act and the Arms Supply Agreement between the U.S. and Israel.

“Moreover, Biden is moving to ship more weapons to Israel as we speak. These efforts by Alexandria Ocasio-Cortez and others may be worthwhile, but Speaker Nancy Pelosi and company will likely push them aside. The efforts by Sanders and other senators, while a welcome departure from the usual rhetoric from Capitol Hill … are unlikely to jar the Biden administration.

“During the impeachment of Trump earlier this year — which I supported — Democrat after Democrat stated that the issue was not disliking Trump, it was his pernicious violation of the law that was the issue. Well, President Biden is now violating laws. He is aiding and abetting a foreign power in conducting war crimes in violation of both international law and domestic law.

“The remedy for this situation is for one sitting member of Congress to live up to their responsibilities under our Constitution which they have pledged to uphold and introduce articles of impeachment. We are supposed to be a nation of laws and not men. Impeachment is effectively a check given to each and every member of Congress against a president who is violating the law.”

Boyle was legal adviser to Rep. Henry B. González and wrote the first draft of the González Impeachment Resolution in 1991. George H. W. Bush would later write in his memoirs about his fear of impeachment — that if the Gulf War “drags out, not only will I take the blame, but I will probably have impeachment proceedings filed against me.”

While many regard Rep. Rashida Tlaib and other members of “The Squad” as unique in their stance on Israel, that is not accurate. For example, Rep. Paul Findley — the author of the War Powers Resolution and a longtime associate of Boyle’s — addressed the issue in a manner that resulted in his political defeat at the hands of political operatives including Rahm Emanuel.

[Another Republican Congressman who opposed Israel was Pete McCloskey.]

Jewish Currents reported on May 19: “AOC to Introduce Resolution Blocking Bomb Sale to Israel.” Groups are urging Sen. Bernie Sanders and other senators to introduce similar resolutions in the Senate, which, unlike the House, would likely force a vote. According to Jewish Insider, Sen. Sanders, Elizabeth Warren and Chris Van Hollen will “introduce a resolution today urging an immediate cease-fire between Israelis and Palestinians.”

On May 20, House members Alexandria Ocasio-Cortez, Rashida Tlaib, and Mark Pocan introduced “H.J.Res.49 – Providing for congressional disapproval of the proposed direct commercial sale to Israel of certain weaponry and munitions.”

This was referred to the House Foreign Affairs Committee.

House Foreign Affairs Committee Chair Gregory Meeks (D-N.Y.) and other Democrat leaders had said they would ask Biden to delay the sale, but Meeks then backtracked on this. Meeks had been backed by the powerful pro-Israel lobby organization AIPAC for the chairmanship position.

Also on May 20, Senator Bernie Sanders introduced: “S.J.Res.19 – A joint resolution providing for congressional disapproval of the proposed transfer to Israel of certain defense articles, including defense services and technical data.”

This was referred to the Senate Committee on Foreign Relations.

The resolution is emblematic of the rift among Democrats about how much to pressure Israel over the conflict ― and the willingness of left-leaning lawmakers to challenge the Biden administration…Sanders’ resolution could at least spark a debate over [using the sale as leverage], even if its chances of passage are slim.

“[W]e cannot simply let another huge arms sale go through without even a Congressional debate,” Sanders, I-Vt., said in a statement Thursday. “I believe that the United States must help lead the way to a peaceful and prosperous future for both Israelis and Palestinians. We need to take a hard look at whether the sale of these weapons is actually helping do that, or whether it is simply fueling conflict.”

On May 19, Senators Bernie Sanders, Elizabeth Warren, and Chris Van Hollen introduced a resolution (S.Res.225 – cosponsor list here) calling for an immediate ceasefire. The resolution opened with the words, “every Palestinian life matters” and “every Israeli life matters,” and “supports diplomatic efforts to resolve the Israeli-Palestinian conflict, uphold international law, and protect the human rights of Israelis and Palestinians.”