You Are Here: Home → Dancing While Palestinian 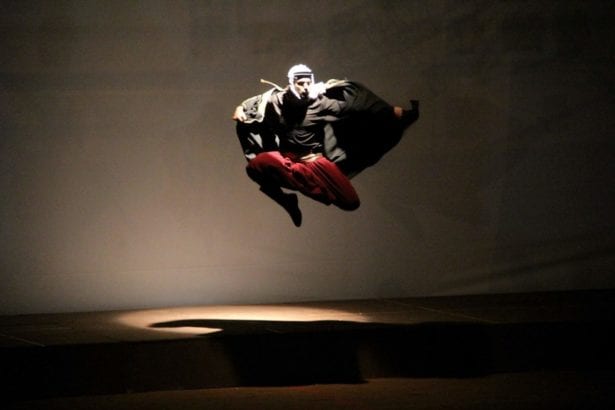 Dancing While Palestinian can land you in prison. (Pictured: Ata Khattab in action – before his arrest)

Dancing while Palestinian can be a source of joy and unity, a celebration of culture, and a form of defiance against the Israeli occupation – that’s why it’s so dangerous.

In occupied Palestine, even dance can land you in prison. Especially if that dance draws inspiration from Palestinian history and heritage.

The arrest, in February, and continued detention without charge of acclaimed dance choreographer Ata Khattab underlines just how threatening Palestinian culture and identity is considered by Israel’s occupation forces.

Dance communities and rights groups across the globe are now calling for the release of Ata, who has been detained in a notorious Israeli prison since a raid on his West Bank home in the middle of the night on 2 February.

Family members and neighbors were awakened by the sound of Israeli soldiers breaking into his family home in al-Bireh, near Ramallah, and calling out Ata’s name at 4 am.

The arrest of Ata, artistic coordinator with the world-renowned El-Funoun Palestinian Popular Dance Troupe, highlights how those who promote Palestinian culture are routinely targeted by the Israeli authorities, say family members and colleagues.

He’s the second generation of his family to be targeted in such a manner. His father, Muhammad Ata Khattab, was imprisoned when Ata was a child.

Two weeks ago, his family discovered that Ata had contracted Covid-19 after being held at the infamous Russian Compound detention center, despite having being kept in solitary confinement since the raid at his family home.

He did not have access to an attorney for the first 21 days of his detention.

Prisoners in the interrogation center spend almost every minute of every day in solitary confinement, leading to the belief that he was exposed to COVID-19 by one of his Israeli interrogators.

Ata, 31, has led international tours with El-Funoun to promote dabke, a traditional Palestinian dance, and his detention has mobilized dance communities in countries such as the United States, Ireland, Belgium, the UK and Norway which have previously enjoyed his vibrant performances.

Ironically, the solo piece which earned Ata a standing ovation at NUI Galway in Ireland in 2017 explored his own early memories, as a child, of his father’s prolonged absences from the family home after being detained by the Israeli military.

Muhammad was one of the founders of El-Funoun. His family believe he was targeted for his work in safeguarding and promoting Palestine’s rich cultural heritage and leading the vibrant revival of dabke.

The troupe was founded in 1979 by a small group of men and women who were determined to present and preserve authentic Palestinian music and dance, despite hostility from the Israeli military authorities – this long before the advent of the Palestinian Authority – and systematic attempts to suppress their traditional culture.

“I was arrested for three months and put in administrative detention because of the songs that we were singing,” Muhammad told The Electronic Intifada.

Israel routinely holds people, including children, in administrative detention, or imprisonment without charge or trial, subject to six-month renewals.

Muhammad said that his son was targeted because he was a leader of young people at the dance troupe. Israeli soldiers also mentioned his activism as a student leader on the morning of his arrest, Muhammad told The Electronic Intifada.

Committed to a free Palestine

Since its inception, El-Funoun has been committed to diversity and includes men, women, children, Christians, Muslims and members of minority communities among its dancers.

The troupe currently has about 230 members. Leaders such as Ata work as volunteers.

The emphasis is on the importance of collective action and unity through dance, as well as the important role women play in the Palestinian struggle.

Noora Baker, who heads training and experimentation at El-Funoun, said the arrest of Palestinians in the middle of the night was a common occurrence for people living under occupation.

“This is what they do. They come in the middle of the night, break down the doors, and disturb the peace of the neighborhood,” said Baker.

“In Palestine, you can be imprisoned for your ideas and your values. There are many prisoners who are numbers to the public and not looked at as human beings. One thing they all have in common, whether they are artists or carpenters, is that they all believe in the same thing: a free Palestine.”

She went on to describe a process of “detentions without charge or trial or sham hearings before Israeli military courts,” which convict over 99 percent of Palestinians brought before them.

“The arrest, detention and interrogation of Ata Khattab is an outrage, and the efforts being taken by the dance and art communities in Ireland, the United States and elsewhere to win his freedom are critically important solidarity efforts.”

There are currently 4,450 Palestinian political prisoners in Israeli detention. Of those, 440 are being held in administrative detention.

Administrative detention orders, first introduced into Palestine by the British colonial mandate, were adopted by the Israeli government as a mechanism to repress Palestinians and avoid any due legal process since they need neither charge nor trial.

Detention orders are issued for up to six months at a time, but they are indefinitely renewable, which means that Palestinians can be jailed for years at a time. The longest administrative detention so far was eight years.

Detentions are often authorized based on “secret evidence” that can amount to nothing more than the word of an Israeli intelligence official.

El-Funoun’s work celebrates Palestinian resolve and resistance in the face of constant adversity, through inspiring dance shows which have resonated with audiences throughout Palestine and across the globe.

Such defiance to Israel, however, carries a price.

“In Palestine, everybody is subjected to oppression on a daily basis, whether you are in prison or walking in the street,” said Baker.

“Ata is an artist who has been vocal about the treatment of our people, and he is very popular with young people.”

Ata remains in custody. He is due to appear before a military tribunal on 18 April, according to his father.