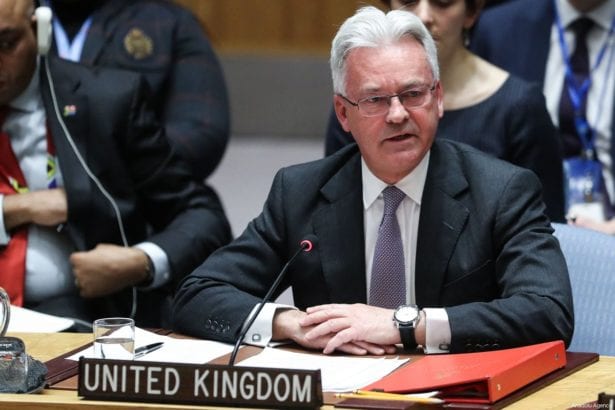 Former British Minister of State for Europe and the Americas Sir Alan Duncan (Front), makes a speech during the Security Council meeting on the situation in Venezuela, at the United Nations headquarters in New York, United States on 26 January 2019. [Atılgan Özdil - Anadolu Agency] (i1.wp.com)

Reposted from the Middle East Monitor

Former Foreign Office Minister Sir Alan Duncan has accused pro-Israel lobbyists of “the most disgusting interference” in British politics, and of negatively influencing the country’s foreign policy in the Middle East. The veteran politician has also claimed that Conservative Friends of Israel (CFI) went “ballistic” and blocked him from taking on a new post covering the region’s affairs.

Duncan, a former Conservative MP and government minister makes sensational claims in his newly published memoir, In The Thick of It: The private diaries of a minister (published by William Collins, 2021). Speaking to journalist Michael Crick about his book for the MailPlus website, the 64-year-old blasted CFI and its undue influence in British politics.

Conservative Friends of Israel, he said, had injected a “Netanyahu-type view of Israeli politics into our foreign policy,” referring to Israel’s right-wing prime minister. He claimed that it had applied pressure on Theresa May’s government to prevent him from becoming Middle East minister at the Foreign Office.

In his book, Duncan claims that his new role was agreed until the then Foreign Secretary Boris Johnson alerted him to the fact that CFI “are going ballistic”. He insists that he was blocked from taking the post because he believes in the rights of the Palestinians.

In one diary entry, Duncan is scathing about Conservative MPs’ fawning over Benjamin Netanyahu during his visit to Britain. He was “ashamed” of the British government, accusing officials of allowing Netanyahu to “peddle pro-settlement propaganda”.

Duncan described to Crick the culture of fear created by CFI. “A lot of things do not happen in foreign policy or in government for fear of offending them because that’s the way it’s put to them by the CFI.”

He warned: “It’s a sort of buried scandal that has to stop… they will interfere at a high level in British politics in the interests of Israel on the back of donor power in the UK.” Ultimately, he pointed out, the influence of the pro-Israel lobby group came at the expense of the Palestinians.

Duncan has been a major target for the pro-Israel lobby. In 2017, an Al Jazeera documentary [see below] sensationally exposed the operations of pro-Israel lobbyists working with the Israeli Embassy in London to “take down” a minister of the Crown. Duncan, fellow Conservative MP Crispin Blunt, and former Labour leader Jeremy Corbyn were marked out as targets. Writing for Al Jazeera at the time, Robert Grenier, a retired, 27-year veteran of the CIA’s Clandestine Service, warned against what he called the “insidious threats” of the pro-Israel lobby.