You Are Here: Home → How was your week? Seven days of Israel human rights violations

How was your week? Seven days of Israel human rights violations 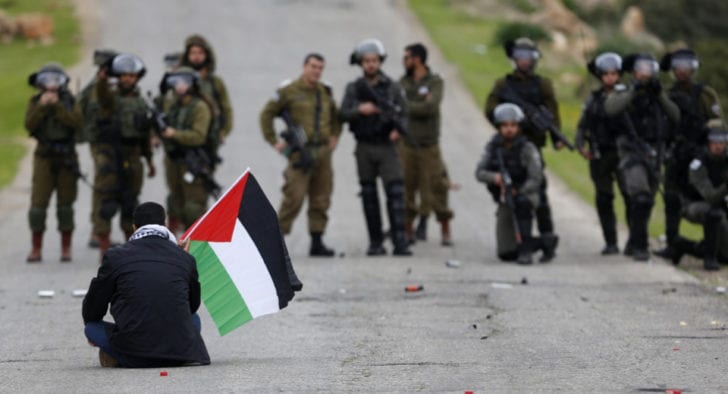 Israel’s human rights violations against Palestinians continue unabated. (Pictured: A Palestinian demonstrator holds a national flag in front of Israeli forces as part of a protest in the West Bank, Tuesday, Feb. 25, 2018)

Not a day goes by during which Israeli military and/or settlers do not commit human rights violations against the people of Palestine – from abduction and shooting to  land theft and home demolition. Scan 7 days of headlines for a sampling.

If Americans Knew consistently brings you news about the Israel lobby, US policy and legislation, and major events in Israel-Palestine – but we mustn’t lose sight of the fact that “small” incidents of violence and injustice occur on a daily basis. Every time a Palestinian is killed or kidnapped, an entire family is traumatized. Every time a piece of land is confiscated or an olive tree is destroyed, an entire family suffers an economic setback.

The Palestinian Center for Human Rights (PCHR) documented over 200 violations of international law by Israeli military and settlers in the last week – that’s almost 30 human rights violations a day. A large number of these, PCHR points out, are perpetrated in the middle of the night and with excessive force.

Below are headlines from the International Middle East Media Center (IMEMC) from just one week. Click to read the articles, or just soak in the headlines.

Tortured And Isolated; Released Detainee Unable To Remember His Family

Health Condition Of Detainee Worsening After 45 Days Of Hunger

Israeli Colonists Assault A Palestinian Woman And Her Toddler In Hebron

Palestinian Forced To Demolish His Own Home In Jerusalem