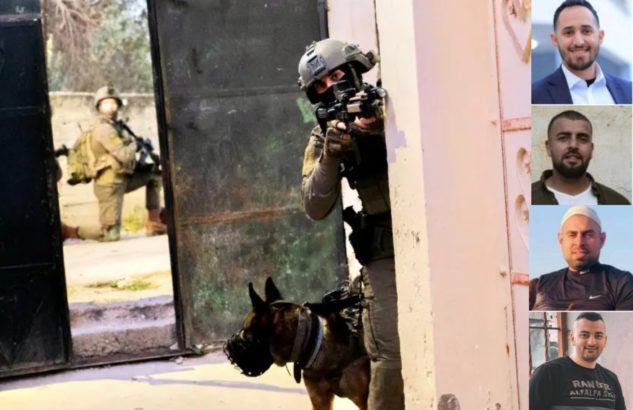 In Jenin on Wednesday, Israeli soldiers targeted not just resistance fighters, but also reporters, ambulances, and medics. Nearby schools – including a kindergarten – were under threat, and Palestinians protesting this brutality were assaulted.

This is not an isolated Israeli attack, nor is it a mere retaliation for the killing of an Israeli soldier. This is a military superpower prohibiting legal resistance and protest against its illegal occupation. Some in Israeli media have surmised that israel is purposely provoking another intifada (uprising). The Palestinian death toll this month alone is now up to 18 (1 Israeli is also dead.).

Israeli soldiers seriously injured a number of Palestinians. This report will be updated if their status changes.

Several related articles, which add more perspective, are linked below.

The Palestinian Health Ministry confirmed that Israeli soldiers killed four Palestinians and injured forty-four, some seriously, in a massive invasion of Jenin, in the northern part of the occupied West Bank.

The Ministry said the fourth slain Palestinian has been identified as Mohammad Mahmoud Barahma, 30, from Anzah village, southwest of Jenin.

The Ministry added that the soldiers also shot forty-four Palestinians, including several young men who suffered life-threatening wounds, and children.

Two of the seriously wounded Palestinians have not been identified due to their serious upper-body wounds, and the hospital is appealing to the Palestinians to help identify them and to donate blood.

The Palestinians announced a general strike in several parts of the occupied West Bank and held massive protests in Ramallah, Hebron, Nablus, and several other areas of the occupied territory, causing many injuries.

Earlier report: The Health Ministry has confirmed that the soldiers killed three Palestinians, Abdul-Rahman Fathi Khazem, 27, Mohammad Mahmoud Barahma, 30, and Ahmad Nathmi Alawna, 26. At least Forty-four Palestinians have been injured, three serious, including one whose skull was shattered by a bullet fired by an Israeli army sharpshooter.

Abdul-Rahman was ambushed between Palestinian homes before the soldiers executed him before he noticed them, eyewitnesses have confirmed.

He is the brother of Ra’ad Fathi Khazem, 29, who, on April 8, 2022, was killed by Israeli forces while hiding near a mosque in Jaffa. The soldiers invaded the Jenin refugee camp to abduct his father.

One of the wounded Palestinians is a seriously injured child who the Israeli soldiers shot with two live rounds in the chest and the thigh, severing a main artery.

Ambulances are still moving wounded Palestinians to hospitals in Jenin, while many are still trying to reach the areas of protests, especially in Jenin refugee camps and near Ibn Sina Hospital in Jenin city.

Some of the wounded were shot in the head and the chest; the extent of their wounds is to be determined.

Palestinian civilians are also using their cars to transport wounded Palestinians to hospitals.

Palestine TV added that the army repeatedly pretended to be withdrawing from the area and waited until dozens of Palestinians gathered in the streets before advancing and firing live rounds on them.

The soldiers also frequently targeted Palestinian ambulances, medics, and reporters with live fire to force them to leave.

The soldiers also fired many live rounds at several schools in the area, causing damage, and anxiety attacks among the children in a kindergarten.

On Wednesday, dozens of armored Israeli military vehicles invaded the areas surrounding the Jenin refugee camp in the northern West Bank city of Jenin and surrounded a home before firing a missile at it, in addition to shooting at least nine Palestinians, two seriously.

Palestine TV said the armored military vehicles, including two bulldozers, surrounded the family home of Ra’ad Fathi Khazem, 29, who, on April 8, 2022, was killed by Israeli forces while hiding near a mosque in Jaffa, before an armed drone fired a missile at it.

The army said its soldiers invaded Jenin to arrest Ra’ad’s father and his brother and alleged that the brother is responsible for firing live rounds at soldiers of the Israeli Combat Engineering Corps near the Al-Jalama roadblock two weeks earlier.

The attack led to protests in several parts of Jenin before the soldiers targeted the Palestinians with live fire and fired many rounds at ambulances and medical teams trying to evacuate wounded Palestinian.

The soldiers also closed the Jenin refugee camp and surrounding areas and attacked Palestinian journalists to prevent them from entering the city to document the invasion and the unfolding events.

Eyewitnesses said the soldiers invaded several tall buildings and ransacked them before occupying their rooftop to use them as firing posts for their sharpshooters.

The sharpshooters on top of the buildings, and others hiding behind trees and homes, fired many live rounds at Palestinian protesters, including many rounds toward journalists and press vehicles.

Palestinian children in schools in the invaded area in Jenin and Jenin refugee camps were told to hide under the desks and behind the concrete walls in their classrooms due to the intensity of Israeli army fire, especially the sharpshooters.

School administrations said they advised the children to remain in their educational facilities because of the ongoing invasion and the intensity of Israeli army fires in the streets.

Salam Taher, the director of the Education Ministry in Jenin, said many children suffered severe anxiety attacks, and added that the children in classes on the upper floors were taken to the lower levels to avoid direct Israeli army fire.

She added that the schools are taking all precautionary measures to ensure the safety of the children and staffers in the schools.

Furthermore, the army deployed dozens of additional soldiers, closed and surrounded Jenin city, and deployed many armored vehicles to surround several areas, especially near and around the Jenin refugee camp.

Reports remain scarce due to Israel’s isolation and closure of the Jenin refugee camp and the fact that the army is preventing journalists and medics from entering it.

Ambulances, medics and journalists are trying to enter the refugee camp, but the soldiers continue to prevent them and are threatening to target them with live fire.

For a deeper dive into the Palestinian situation under occupation, we recommend the following articles by Israeli journalist Gideon Levy: