You Are Here: Home → Israeli soldiers assaulted Palestinian, mocking and beating him severely 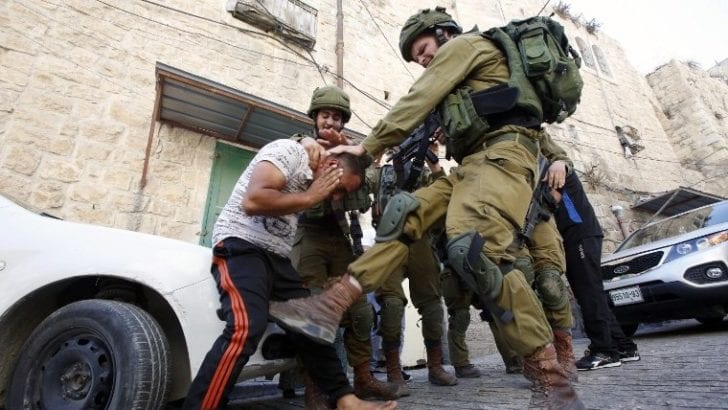 Photo of a similar beating on September 20,2016 in Hebron, in the West Bank. (AFP Photo/Hazem Bader, Times of Israel)

“It has been six days, and I still ache all over. My ribs hurt when I breathe, and I still have blue marks on the right side of the body and on my back. I still have no idea why the soldiers attacked me so violently. All I know is that they didn’t even ask to see our ID’s….”

I got home at around 4:00 A.M. My wife and my eldest son, Saqer, 4, were awake, waiting for me. I hugged Saqer and burst out crying. I was exhausted and felt helpless. My wife kept trying to calm me down.

Around midnight, on 23 June 2020, Mu’tasem Qawasmeh, a 24-year-old resident of Hebron and father of three, was driving to the nearby village of Bani Na’im with two passengers – his friends Madin al-Ja’bri, 21, and Zeid Abu Zeinah, 22.

When they arrived at the Road 60 and Road 35 intersection (east of the northern entrance to Hebron), some soldiers standing by the side of the road signaled to Qawasmeh to pull over. When he did, the soldiers, four of them, ordered him to turn the ignition off and told all three men to get out of the car and stand on the shoulder of the road, facing it. As one soldier kept watch over the three men, the other three searched the car.

The search took about ten minutes, and once it was over, the soldiers ordered the three to turn around and face them. One of the soldiers was holding Qawasmeh’s wallet, which he had found in the car, and gestured for him to approach. Another soldier pulled Qawasmeh by the hair toward the soldier who had his wallet, while the soldier who was keeping guard told Qawasmeh’s friends to turn around and face the road again. The soldier who had Qawasmeh’s wallet asked in Hebrew: “What is this”? When Qawasmeh could not reply in Hebrew, he swore at him and kicked him in the ribs and abdomen. Another soldier joined in, and together they swore at Qawasmeh and kicked him again. When he fell down, they demanded he get up. When he could not get up, three of the soldiers pounced on him, hitting him with the butts of their rifles and kicking his back. When Qawasmeh’s friends tried to turn around to see what was happening to him, the soldier who was guarding them pushed them with the butt of his rifle and forbade them from turning.

After the soldiers finished searching the car, one of them, the one holding my wallet, gestured to me from a distance to approach him. Another soldier pulled me over there by the hair until I was standing in front of the soldier. The first soldier asked me in Hebrew, “What is this”? I answered in Arabic: “It’s my wallet.” The soldier demanded I answer in Hebrew, and I told him in Arabic that I didn’t speak Hebrew. And then, all of a sudden, he kicked me in the right side of my stomach. It was a strong kick. It hurt a lot, and I almost fell over. I heard the other soldiers laughing. The soldier started swearing at me in Arabic and Hebrew. I was scared and confused. I didn’t understand why the soldier was being so violent.

Suddenly, another soldier came up to me and kneed me hard on the same side of the stomach. I doubled over in pain and almost fell, but I managed to keep myself upright. The soldier with the wallet kept swearing at me, and the others kept laughing. Before I managed to figure out what was going on, the soldier with the wallet kicked me again in the same spot. I cried out in pain and fell to the ground. The soldier came up to me and tried to get me up. He said to me in Arabic: “Why aren’t you defending yourself”? The other soldiers asked me in Arabic, “Is everything okay”?

I couldn’t get up, and then the three soldiers started hitting me with the butts of their rifles and kicking me in the back. I cried in pain the whole time.

Zeid Abu Zeinah described the assault on his friend in a testimony he gave B’Tselem field researcher Musa Abu Hashhash on 29 June 2020:

They searched the car for about 15 minutes and then came back and stood in front of us after we’d turned around to face them. One soldier was holding a wallet and pointing at Mu’tasem. He ordered him to approach and asked him: “What is this”?

I saw one of the soldiers go over to Mu’tasem and pull him by the hair towards the soldier who was holding the wallet. Then, the soldier who was standing next to us told us to turn back around and face the road. He yelled at us not to move. Every time I tried to turn around to see what was happening to Mu’tasem, he pushed me with the butt of his rifle.

At some point, Mu’tasem started crying out in pain, and I could hear swearing in Arabic and Hebrew. I gathered that the three soldiers were beating him up. It would go quiet for a few minutes, and then I’d hear Mu’tasem crying out again. That went on for a long time. Cars drove by in the meantime, but they didn’t stop. At some point, I was able to peek backwards and saw Mu’tasem lying on the floor.

After about an hour, a military jeep showed up. The soldier who had been holding the wallet threw it on the ground right away and told Qawasmeh and his friends to leave the place. Qawasmeh’s friends helped him into the front passenger seat of his car. Madin al-Ja’bri drove the car to the northern entrance to Hebron and continued directly to al-Mezan Hospital. From there, Qawasmeh was referred to al-Ahli hospital, where he was examined and x-rayed. The physicians wanted to admit him but he insisted on going back to his house, which is close to the hospital.

Qawasmeh added in his testimony:

I got home at around 4:00 A.M. My wife and my eldest son, Saqer, 4, were awake, waiting for me. I hugged Saqer and burst out crying. I was exhausted and felt helpless. My wife kept trying to calm me down.

It has been six days, and I still ache all over. My ribs hurt when I breathe, and I still have blue marks on the right side of the body and on my back. I still have no idea why the soldiers attacked me so violently. All I know is that they didn’t even ask to see our ID’s.