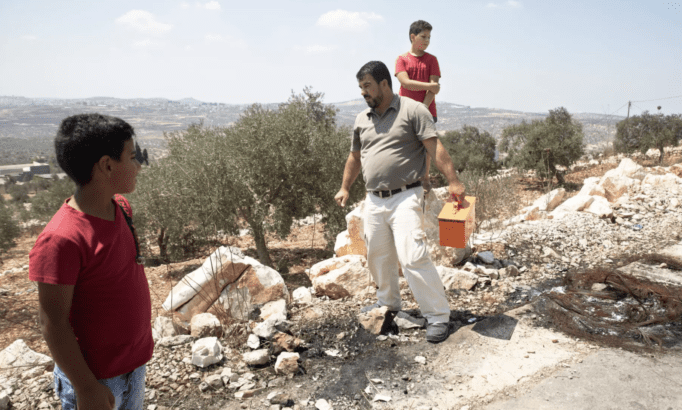 Mamoun Shtaiwi with a crate of stun grenades (C) with the child who found an explosive device (L) in Qaddum, August 25, 2020.

A 7-year-old Palestinian boy discovered a box full of stun grenades planted in his village by Israeli soldiers the night before, one of 3 such boxes set to explode when touched, camouflaged with stones and scraps of cloth…

Ha’aretz reports that a Palestinian child discovered a box full of explosives near his home last week. It was one of at least three such boxes placed there by Israeli soldiers as a “deterrent.”

Last Wednesday night, Israeli soldiers entered the West Bank village of Qaddum around midnight to plant the explosives in the area, which sees a large amount of foot traffic. They were set to explode when touched, and camouflaged with stones and scraps of cloth.

The next day, a seven-year-old boy saw one of the boxes. He explained later, “I wanted to pick it up and play with it.” But his mother and other relatives were suspicious. They picked it up and shook it; it exploded, wounding one of them.

They found another similar box nearby and detonated it from a distance.

Another village resident reports finding a sign nearby, in Hebrew, reading, “Keep away or die; danger of death.”

The Israel Defense Forces (IDF) admitted to placing the stun grenades, adding that they were planted as a deterrent in an area where “violent riots have regularly occurred for years.”

The military spokesman maintained that, “after it was discovered that this could lead to injuries, forces worked to remove them from the area.” An investigation has been opened.

It is against international law to place armed explosives in a civilian area.

Residents of the village also noticed that a Palestinian flag in the area had been removed.

Residents of Qaddum have been holding weekly demonstrations for nine years, protesting the closure of a main road, which had been closed to accommodate the expansion of a nearby settlement. The village has frequently made the news.

In recent months, videos have recorded an Israeli military bulldozer facing off against protesters; Israeli soldiers slashing tires of cars owned by Palestinians, and throwing tear gas canisters into a Palestinian home; they have also intentionally shot holes in water tanks (water is scarce for many Palestinians in the West Bank). Reports of Israeli forces injuring Palestinian protesters are also numerous. 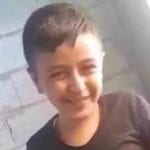 Most alarming of all is the story of nine-year-old Abdul Rahman Yasser Shteiwi, who was shot in the head during a protest last year. The bullet shattered into at least 100 pieces. The IDF at first denied using live ammunition, but it was later proven that they did, and were responsible for Abdul Rahman’s injury.

Another boy, age fifteen, was shot in the head by an Israeli soldier in January on a Thursday, when there was no protest. Experts say the shooter was only a few yards away. The IDF delayed the car taking him to the hospital for 25 minutes.