You Are Here: Home → Israel Prevented 15 Terror Attacks, but How Many Did It Cause?

Israel Prevented 15 Terror Attacks, but How Many Did It Cause? 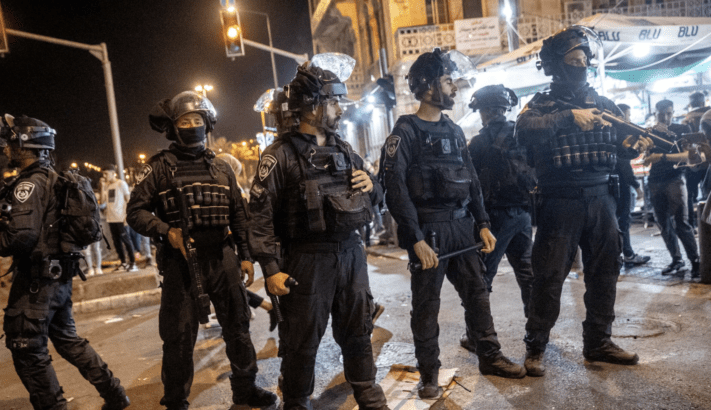 Israeli forces at Damascus Gate in Jerusalem at an event marking the beginning of the month of Ramadan in April.

Israel’s efforts to thwart Palestinian resistance simply create grounds for more resistance. Only ending the occupation will end the resistance.

The story is always the same: Following a bloody terror attack, the prime minister, defense minister and chief of staff stand before the microphones and proudly announce how many terror attacks had been prevented in the weeks leading up to the attack that was not prevented.

The nation should know that its guardians are as alert as ever, and that it’s just that the terrorists refuse to cooperate with Israel’s deterrence and counterterrorism efforts.

It was the same last week. Prime Minister Naftali Bennett declared that 15 attacks had been prevented, Chief of Staff Aviv Kochavi spoke of “at least 10” and Defense Minister Benny Gantz touted 200 arrests, and promised he was ready to make thousands. This is all very impressive, but one statistic was not relayed to the public for some reason, namely how many attacks were caused by all these mighty efforts to thwart, prevent and deter.

The attackers don’t set out to do harm just out of boredom. And, contrary to popular belief, they are not determined to wipe out the entire Jewish people, just like the fighters of the Jewish pre-state militias were not out to wipe out the entire British people, Algeria’s FLN had no intentions of exterminating the French people and French Resistance fighters had no intention of finishing off each and every German.

All of the above committed attacks because they were occupied, because their liberty and their rights had been stolen from them, because they had been severely abused by the occupiers’ acts of prevention and deterrence.

For example, think of the common Israeli practice of raiding homes in the middle of the night, pulling youngsters out of their beds, beating them up and handing them over to investigators who threaten them and put them through the wringer. How many terror attacks has this practice prevented and how many has it given rise to?

Or the lovely custom of demolishing the homes of innocent people because someone in the family was involved in a terror attack. This surely deters people. But how many of them will decide to pick up a kitchen knife and avenge the family that was left homeless?

And the regular abuses by the local “captain” of those subject to his arbitrary authority, how many attacks have they foiled and how many have they caused?

And the humiliation of parents in front of their children, and the serial theft of land for punks from the settlements, and the blackmailing of those seeking medical treatment so they’ll act as collaborators, and the denial of work permits, the negation of any chance of a decent life, the endless abuse at the checkpoints, the torture in the interrogation rooms and the dozens of bodies that were taken from their families and kept in refrigerators (Punishment? Evil? Bargaining material? The devil only knows).

Not to mention the appalling ease with which killing is done, as if this was just bird-hunting. How many attacks has the aggregation of all these things prevented, and how many has it wrought?

Logic therefore requires that, whenever the politicians laud the number of attacks that have been prevented, the public should also be informed about the other side of the coin. It could go something like this: “In the past few months, the security forces prevented 18 terror attacks, and created pretexts for 179 new terror attacks. Five of those occurred this month. A statement will be made about the other attacks after they are committed.”

Once upon a time, years ago, there was one way out of this vicious cycle – through genocide, as the Spaniards committed with the Aztecs and Incas, the Americans with the Native Americans and the Australians with the Aborigines. To the dismay of many Israelis, this method is no longer in fashion. It has lost its charm. What a shame our current occupation didn’t happen back in the days of Yehoshua Bin-Nun.