You Are Here: Home → The fine line between “hero” and “terrorist”

The fine line between “hero” and “terrorist” 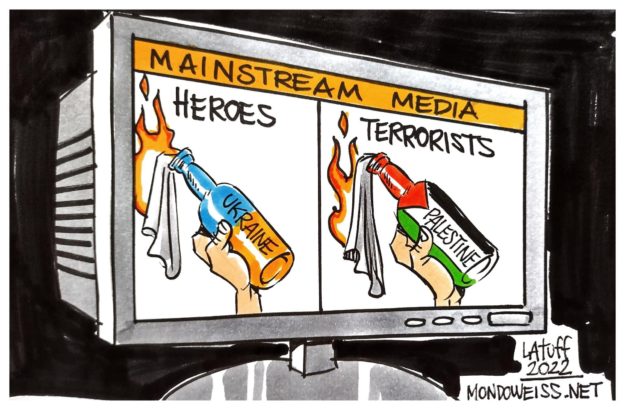 There’s a serious double standard in media coverage of – and global reactions to – the Russian-Ukrainian conflict vs. Israeli-Palestinian. Why?

Ukrainian citizens are being hailed for doing exactly what Palestinians get shot for. Time to learn a few of Israel’s secrets, then reconsider the meaning of “terrorist.”

Palestinians have been watching with great sorrow and interest the Russian attack on the Ukrainian people. Sorrow, of course, because war is hell and Ukrainians are human beings. Interest because, while the people of Palestine identify with Ukraine’s situation – under attack, under occupation – the world’s response to the two catastrophes is completely different.

When Ukrainians are under attack, other countries generously supply it with weapons to fight back; when Israel attacks Palestinians, other countries give Israel more weapons – including the U.S, which gives Israel over $10 million per day in military aid.

A weapon in the hands of a Ukrainian civilian (even every Ukrainian civilian) is acceptable – but Palestinians are not permitted to defend themselves against their occupier. Those who try are likely to be shot and left to die. (Note: “weapon” may be defined as a gun, knife, rock, kite, balloon, or any other item that could, in theory, injure someone. Israeli soldiers often wear full body armor and are rarely injured. Also note: the same weapons in the hands of Israeli settlers will not have the same result.) 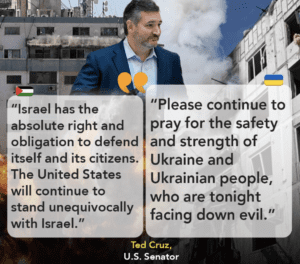 A weapon in the hands of a Ukrainian government official is acceptable – what about a Palestinian official? He is assassinated.

A young Ukrainian girl yelling at a Russian soldier is brave – but when she turns out to be Palestinian, and the soldier Israeli, we lose interest.

Photos of ruined buildings in Kyiv are viewed with horror. When they turn out to be pictures of Israel’s attack on Gaza last May, we let it slide.

Why is that okay? Israel’s supporters, and many US Congress members, would say Palestinians don’t deserve worldwide support because Palestinian “terrorists” – especially Hamas – are threatening Israel’s existence.

We tend to believe this reflexively, as though it is a proven fact – but it’s not. It’s an assumption we make based on years and years of filtered, Israel-centric media reporting (see this, this, this, and this for starters).

What we think we know

We think that Palestinians hate Jews. We think Hamas is a terrorist organization that constantly shoots massive, destructive rockets toward Israel for the same reason.

And we think Israel is a democracy and an ally, doing whatever it must do to defend its citizens, in order to someday be free at last from this terrorist organization.

Therefore, when Israel drops bombs, we think it is a merely a peaceful state making its people safe – but when Hamas shoots rockets, it is a terror group, and the only thing terrorists know how to do is inflict terror.

Actually, there is much about Hamas – and about Israel – that most of us don’t know.

Secret: Israel has Gaza under illegal occupation and siege/blockade

What we don’t know is that Hamas, the ruling party in Gaza, is fighting for the very lives of the people of Gaza. Hamas was elected to resist the occupation and siege of Gaza.

Some say that Gaza is not under occupation, but nearly the entire world absolutely considers it an occupied territory. Israel controls just about everything in the enclave – and has kept it under a brutal siege for 15+ years, blocking the transfer of adequate amounts of food, medicine, and many other staples. Here’s what it was already like for Gazans after just one year into the siege.

Israel has initiated four wars against Gaza (if you can call it “war” when one side has essentially no real army and the other side has one of the most advanced armies in the world). In these conflicts, Israel has killed over 4,000 Gazan Palestinians; Hamas killed about 100 Israelis.

Israel defends these attacks by claiming that Hamas rockets terrorize and kill Israeli citizens, and had to be stopped.

Hamas first began using rockets in 2001 after Israeli airstrikes had killed 570 Palestinians. These rockets have killed a total of about 40 Israelis in 20 years (Israel forbids Palestinians to have a standing army – Hamas is a political party with an armed wing).

To put it another way: Israel has killed 4,000 Gazans in order to stop rockets that have killed an average of 2 Israelis a year.

How does Israel do so much damage? $10 million a day in military aid from the US has made Israel one of the top military powers in the world.

A large percentage of Gazans killed by Israel are private citizens – but Israel invariably rationalizes these civilian deaths merely by claiming that someone from Hamas was in the vicinity. Last May, 17 members of a Gazan family were wiped out in one night. Israel merely said the deaths were “unintended,” and the target was Hamas.

The rockets haven’t stopped because the cause for resistance hasn’t gone away. Israel still has Gaza under siege; Gazans are still starving and dying.

Gazans tried using a massive Gandhian type march for over a year in 2018-19, holding mass demonstrations every weekend. Israeli snipers killed over 200 protestors, including medics, journalists, children, and disabled individuals, as well as people running away, people with their hands up, and people who were praying.

In the West Bank and East Jerusalem, there is no Palestinian military – only tiny pockets of local militias. Most Palestinian deaths are civilian, usually killed while peacefully protesting, “collateral damage,” or otherwise not posing a direct threat to anyone.

Israeli human rights abuses are well-known and have gone on for decades. Three major human rights organizations have recently called Israel’s treatment of Palestinians “apartheid” (Israel is outraged by this, but has yet to disprove the allegation).

Israel regularly disregards international law and United Nations censure because, it claims, it is trying to stop Palestinian “violence.”

But under international law, long-term occupation is prohibited, while resistance against occupation – even armed resistance – is permitted.

The only way Israel gets away with its actions is by constantly “reminding” us that Palestinians are terrorists and want to destroy Israel.

Fish in a barrel

The tiny Gaza Strip (about the size of Philadelphia) is one of the most densely populated regions in the world. About three-quarters of the population of Gaza are families of refugees who lost everything and were sent into exile in 1948 for one simple reason: they were not Jewish.

Palestinians living in the occupied West Bank and East Jerusalem live under constant oppression by Israel, and lack most of the freedoms that Israeli Jews (or anyone else living in a democracy) enjoy. They are perpetually vulnerable: Israeli forces can stop them on the road, break into their homes in the middle of the night, and detain anyone without charge indefinitely.

This is the context under which Palestinians live. In Gaza, the West Bank, and East Jerusalem (as well as inside Israel, where 20% of the population is Palestinian), some Palestinians courageously resist their Israeli oppressors.

Of course, Hamas and the PLO have at times perpetrated violent, unsavory actions, and these always receive massive media focus.

Israel has participated in unsavory activities too: as if the initial ethnic cleansing of 750,000 indigenous Palestinians in 1948 was not enough, Israel demolished over 500 Palestinian villages to keep their residents from returning. Israel continues to confiscate Palestinian land, conducts mass arrests and detentions, has killed over 10,000, detained 800,000 (8,000 of them children), and has participated in torture of Palestinian prisoners (including women and children). These actions are largely ignored by the media.

Israel also sells weapons to countries that commit human rights abuses, like Myanmar. It partnered with the apartheid government of South Africa, and bombed an American Navy ship, the USS Liberty, in 1967. Right now, Israel is being investigated by the International Criminal Court for war crimes.

Israel asks us, “if you had rockets raining down on you, what would you do? Of course you would defend yourself.”

But Palestinians ask, ‘if you have been under military occupation, attack, and siege for over 15 years, your land stolen, and your people dying week after week, year after year, what would you do? Of course you would try to end the oppression.’

If we ask ourselves, “why are there rockets, really?” the answer is resistance.

If Israel wants the rockets to end, it must end the occupation and siege.

Who are the terrorists – the ones trying to resist their own slow death, or the ones dropping bombs onto apartment buildings, starving and poisoning children, and violating international laws?